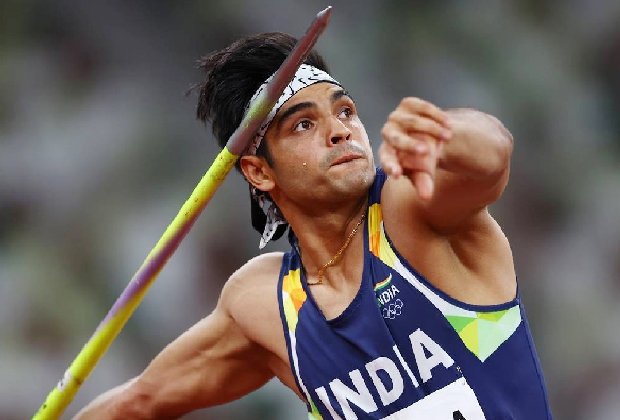 New Delhi: Neeraj Chopra, a Gold Medal winner in Asiad, now wins Gold in Javelin in the Tokyo Olympics.
Putting up a stunning performance, Neeraj Chopra won the gold medal in the men’s javelin throw with a best attempt of 87.58 m.

This displays the rise of a ‘Naya Bharat’ in sports certainly and 23-year-old Neeraj will go down the memory lane as the Destiny’s boy, with golden arms.

His achievement has taken India among the first 50 – the 47th Rank. This is also for the first time.

India has managed for itself seven medals in Tokyo 2020. Neeraj Chopra is a Subedar of Indian army.

Defence Minister Rajnath Singh wrote: “The Golden victory of Subedar Neeraj Chopra at the Olympic brings laurels for the Indian Army. He performed like a true soldier at the Olympics. It is indeed a historic and proud moment for the entire country including the Indian Armed Forces! Many congratulations to him”.

Entire country jumped into joy as the 125 years wait was over and the first individual athlete Gold came to Neeraj Chopra.

Till now, Abhinav Bindra has been the only individual Olympic gold medalist. His gold in the 10-meter air rifle event came at the 2008 Summer Olympics.

“History has been scripted at Tokyo! What Neeraj Chopra has achieved today will be remembered forever. The young Neeraj has done exceptionally well. He played with remarkable passion and showed unparalleled grit,” the Prime Minister tweeted.

President Kovind in his message said: “Unprecedented win by Neeraj Chopra! Your javelin gold breaks barriers and creates history. You bring home the first ever track and field medal to India in your first Olympics. Your feat will inspire our youth. India is elated. Heartiest congratulations!”.

Union Law Minister and former Sports Minister Kiren Rijiju dedicated this Gold to the illustrious Milkha Singh.
“This is the beginning of a new journey….Tokyo Olympics will be turning point for India,” he said.

In a tweet, BCCI said: “HISTORIC A proud moment for the nation as Neeraj Chopra wins India’s first gold medal at @Tokyo2020. Take a bow”.

Congress leader Shashi Tharoor tweeted: “Neeraj Chopra, who held on to the top spot since the beginning of the first round, has brought India their first ever post-independence athletics #Olympics medal ever! Finally, India has an entry in the Gold Medal category. Congratulations Neeraj Chopra! India is so proud of you!”.