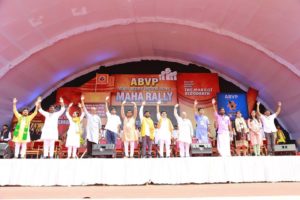 THIRUVANANTHAPURAM: ABVP’s maha rally against Red Terror  atrocities named “CHALO KERALA  held here on November 11 called for sending a high-powered Central Government delegation to study the political killings in Kerala. Addressing the public meeting at the maha rally, ABVP national general secretary Vinay Bidre called for handing over the investigation of the political murders to the CBI. He said the CBI should conduct a re-investigation into the murder of Vadikkal Ramakishnan, in which Chief Minister Pinarayi Vijayan was an accused.

He also sought investigation by the National Investigation Agency into the murders in which extremist links were suspected. “Kerala, the land of Sankaracharya, is the pride of the entire nation. But the communist ideology is anti-national. The Chalo Kerala march was organised to regain that pride and expose the double standards of the communists in Kerala and Delhi,” he said. In Delhi they speak about freedom of expression, and in Kerala they kill their opponents while propagating their ideology. He said communist movement had always been anti-national.

“They stood with China during the Sino- Indian war. The anti-national elements had even crept into the campuses. That is why in the college magazine of Brennen College Thalassery, they insulted the national anthem and Indian nationalism” he alleged. The Chalo Kerala March is to caution the Left movement in the state that the workers of the ABVP in the state are not alone and the entire nation will stand with them, said Sunil Ambedkar. Nithi Tripadhi, ABVP leader from JNU, pointed out the double standards of the SFI and the Left thinkers, both in JNU and Kerala. In Kerala, they are perpetuating violence and not permitting other student organisations to work on the campuses, where they are in majority.

The CPI-M has been conducting cold blooded murders against its political opponents in Kerala especially at times when it is in power in the state. Several of our activists have been martyred fighting communist terror and our offices have been attacked time and again.

Over  One lakh  ABVP workers, leaders and members from across the country take parts in this historic march raising their voice against the human rights violation and bloody murders conducted by the CPI-M and their student body, SFI. Outside Kerala, in other states, the SFI and CPI-M speak of human rights violation and student rights but in Kerala the CPI-M and SFI do not allow their opponents to even work, leave alone freedom of expression and thoughts. They kill their political rivals in the most brutal fashion of barbarians like killing by hurling stones and boulders. We have seen this in Parumala Dewaswom Board College when three ABVP workers : Sujith, Kim Karunakaran and PS Anu were killed by hurling stones against them while they were trying to escape the brutal thrashing by SFI, CPM, CITU and DYFI workers by jumping into river Pampa. However on the tragic day of September 17th 1996 the students were not even allowed to raise their heads in Pampa river as boulders and stones were hurled at them in vengeance from the banks of the river and they succumbed to death. This action which can never be accepted in a democratic society. This is however the Communist style of work – brutal and savage.

At the same time, in JNU, they are speaking about freedom of expression. K S Sanoop, the vice president of the ABVP Kerala unit, turned the entire gathering emotional when he removed his artificial eyes. His eyes were lost in an SFI attack when he won the post of chairperson of the Sree Krishna College, Guruvayur.

He promised the gathering that he will not be cowed down by the threats of the Left. C Sadanandan Master, who lost both his legs in CPM attack also spoke at the event. ABVP national president Dr Nagesh Thakur, Kishore Bhurman, Ashish Chauhan (National secretaries of the ABVP), Mahamedha Nagar (General secretary, Delhi University Union) and P Syamraj (State secretary) also spoke on the occasion. The rally taken out from Museum junction was noted for the massive participation of students from across the state wearing their traditional head gear.

As the leftists are holding an ideology which has been rejected across the world, they are trying to save their last bastions with whatever means they can and these cold blooded murders and killings seems to be their last ploy for survival or rather existence. When they cannot fight an ideological battle, they are resisting to this physical battle with people who don’t agree to their ideology.

Recently, we saw a Communist leader who was arrested for a case relating to attempt murder of BJP workers putting the official cap of the Sub Inspector of Police and then posted his selfie and uploading in social media. Political power seems to have taken to the head of the Communists. Hundreds of people have succumbed to the killer knifes of the Communists in Kerala. In Kerala, more than 250 nationalist activists have been killed by the CPIM goons. In Kannur district alone more than 82 activists of organizations related to RSS have been butchered by CPI-M goons.

Several ministers of the Pinarayi Vijayan cabinet including the Chief Minister are accused in murder cases. The CPI-M state secretary Kodiyeri Balakrishnan is also a murder accused. So, right after this government was formed, attacks have increased manifold. In this scenario, it is important that nationalist students from all over the country stand in solidarity with the nationalist students of Kerala who are fighting communist terror on a daily basis. God’s own country Kerala, which is known for its natural beauty as well as hard working people, needs to be saved from this murderous spree of the communist brigade. Only through strong public movement can this communist culture of autocracy, violence, intimidation and murders be curbed and for that all democratically oriented citizens must join together to raise voice against communists in Kerala.