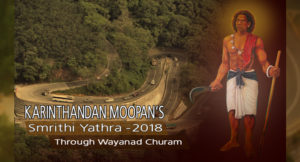 8th KARITHANDAN MOOPAN SMRUTHI PATHA YATHRA Programmes  is on 11th March 2018, the program is organised by

Karinthandan Moopan  is a myth,  connected with the construction  of Wayanad Churam , the gut route of national highway 212 from Kozhikode to Mysore. Before 1700 there was no such way here. After the advent of British people they tried to find out this path. At that time Baypore was a well developed port of north Kerala. The British people for their trade prosperities find Wayanad as a potential area. So they strongily felt the need of a road through Thamarassery forest area for the transportation of spices and other forest items including timber from Wayanad to Baypore.

In search of this challenge they tried to find out a suitable person who had a clear idea about the forest area of western side of Wayanad Ranges. With the help of some local people they acquainted with the Moopan and succeeded in getting contact with him. Then British people tried their level best to convince Moopan about their plans and he agreed to show the path. Karinthandan was the Paniya Moopan of that area. The community people believes that he had some spiritual powers with him and he moves everywhere freely in the forest. With this super human power he finds out the route very easily. After reaching the top of the hill he demanded the foreigners not to exploit the local tribal people with this invention. But this demand was not at all agreeable for the Britishers and a tussile happened between them and they shot him and killed. After the gruesome murder the spirit of Karinthandan was make havocs in the gut route and so many accidents and deaths were occurred.

When the situation has continued some authorities came to the spot and come across the spiritual power of Karinthandan is the problem and they, with the help of a Thanthric priest put the spirit of Karinthandan in a chain and kept on a Baniyan tree. This tree is known as Chain tree of Lakkidi.  It is still there.  Paniyas along with other tribal people and general public those who are passing through this route are worshiping the tree and giving offerings there.

For the last seven years Paniya people are coming together and conducting a padayathra from Adivaram to Lakkidi and offering flowers at Chain tree every year on 2nd Sunday of March. Now the community people want to have a permanent Smruthi Mandapam there. If this Mandapam is constructed the social esteem of this community will shoot up and help them to resurrect from their slumber. Not only that this place is a tourist spot also. If this Mandapam had visualized it will be a boost for tourism also.

This year we want to celebrate this Churam padayathra in a big way and we expect rupees two lacs as expense including football mela, arts festival, corner meetings and concluding program.