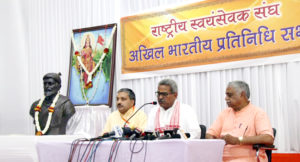 Nagpur(08-03-2018): The three-day meeting of the Akhil Bharatiya Pratinidhi Sabha (ABPS) will be formally inaugurated on Friday. Sarsanghchalak Dr. Mohan Bhagwat Ji and Sarkaryavah Suresh alias Bhayyaji Joshi will guide the participants about the future course of RSS work and mission.

Addressing media persons on the eve of ABPS, Akhil Bharatiya Prachar Pramukh Dr. Manmohan Vaidya said that the elected Pratinidhis and invitees from all over the country numbering around 1500 are expected to attend the three-day conclave at Dr. Hedgewar Smriti Bhavan here. These elected Pratinidhis will elect the new Sarkaryawah for the three-year term.

He further added that 50 percent of the IT professionals who often travel abroad are curious to know about their cultural roots and to know about that they join RSS while some 30 percent join the organization because they want to do something for the society. The youth also, especially those working in the IT sector are more eager to know about the organization and this is visible from the increasing number of entries on ‘Join RSS’ online. During the last year the number has swelled to over 1.75 lakh.

During the Sri Guruji Birth Centenary year the RSS had initiated ‘Samajik Sadbhav Baithaks’ (Social Goodwill Meetings) in 2007. The meeting will discuss the ways and means to intensify the process of spreading social goodwill through such meetings, he added.

He explained with examples that Sangh growth is slow but steady. He cited the recent ‘Rashtrodaya’ Shivir at Meerut in UP where 1.75 lakh swayamsevaks attended in full uniform. Similar such event was held two decades ago in 1998 which witnessed the participation of 20,000 swayamsevkas. The 2018 event reflected upon the steady growth the Sangh had achieved in the 20 year’s time, he said.

There is a growing response from the various strata of the society and the RSS would focus on strengthening and consolidating this support to expand its base further, he added.