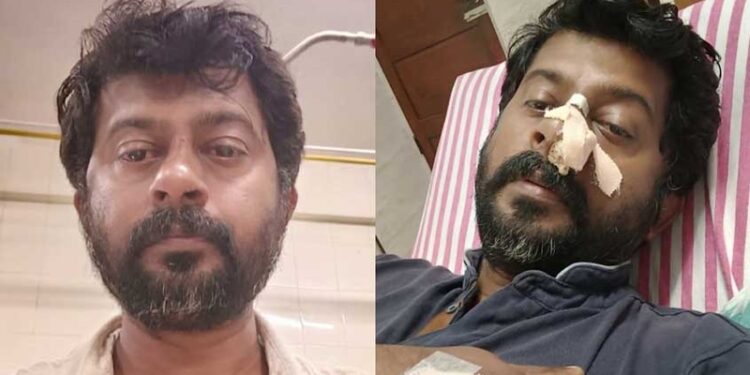 Kollam: Display of national flag in the car is more than enough to invite the wrath of goons in Kerala. Film art director Arkkan and his friend Babu were driving a car displaying national flag during the wee hours of August 15, 2022, the Independence Day, in Pallimukku area, Kollam. Then four men came riding two motor bikes. The, stopped the bikes in front of the car and blocked their drive. The blokes dragged both Arkkan and Babu out of the car and started to beat them brutally. One man rubbed a dagger on Arkkan’s neck and threatened to kill him; they hit on his head and face. Then they wrestled Babu to the ground and kicked him ferociously. Both were badly injured hence hospitalized. They said that the attackers asked them why did they display the flag on their car. They kept on the same question as if both youths had committed a grave mistake.

But, as usual, as in the case of any crimes against the people of nationalistic fervor, police and media got cold feet.  Police said, the culprits had gone to hiding. Later on they arrested two of the four culprits and sent out immediately on bail.  No print or electronic media was interested in this ‘silly story’. But, P. Shivashankar, BJP leader and writer, was not prepared to leave it like that. He raised the issue in social media. Then a popular YouTube Channel took it up. Afterwards some media people came forward to publish it.

Shivashankar’s social media post was very much interesting. These are its highlights:

Bharat is ours. That is why we reacted when Arkkan and Babu were  beaten for displaying tricolour on the car. Film world isolated these poor boys in chorus. Daredevils of the film world keep mum. Their twits and FB turned silent. Writers and script writers keep turned silent.

No one dares to write even a protest note. No MLA talks.

The saying that “To learn who rules over you, simply find out who you are not allowed to criticise” is widely known as the words of Voltaire. But it was actually said by Kevin Alfred Strom.

But, nationalists trust all of them. Because they trust their forefathers and this land where their forefathers lived. Their culture is the legacy of their forefathers. In the film “Apocalypto”, an unarmed character called Jaguar tells the rude enemy fighters: “This is my forest. I used to hunt here with my father”. This is what nationalistic patriots have to say:  “Bharat belongs to our parents. Tricolour, national anthem, Vande Mataram, Kashmir and Kerala belong to us. Those who question this are the tools of our enemies”.