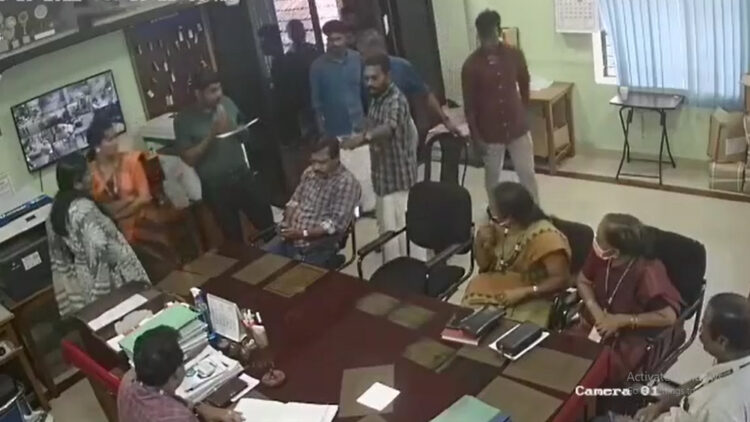 SFI leaders stormed into the office of the Principal of Maharaja’s Technological Institute (MTI), a government polytechnic institute in Thrissur, and the oldest of that sort in the state of Kerala. SFI district leader threatened to break her knees and legs if she takes disciplinary actions against his comrades, read, SFI men, in the campus. It is interesting to see the reason behind this dirty scene:

A new building has been constructed in the campus for conducting the classes. But, the Principal issued an instruction not to enter the new complex until the inauguration. But, SFI workers ignored the instruction and occupied the building and decorated it their party banners and flags. Naturally, Principal initiated disciplinary action against the violators. This is what provoked the cadres.

This is the miniature of series of incidents taking place in Kerala during the “renaissance-oriented” Left Democratic Front regime led by CPM supremo and chief minister Pinarayi Vijayan. It is a Herculean task to count the number of such incidents taking place in the state. Few years back SFI comrades laid wreath on the symbolic tomb created for the Principal of Government  Victoria College, Palakkad, on the day of her retirement. Another shocking incident was in Kochi where SFI men lifted the Principal’s Chair from her cabin and burnt it in the public road in front of the College. How many incidents like this !

Still, CPM, LDF and their government keep on boasting that they brought renaissance in the state, they stand for women and weaker sections and what not !