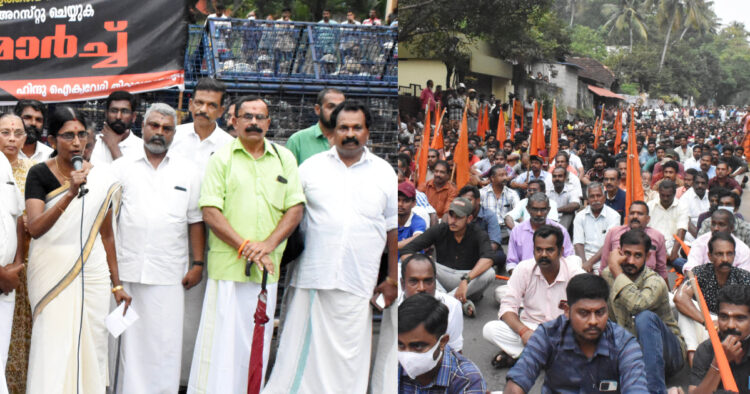 The police blocked yesterday the peaceful march of Hindu Aikya Vedi in Vizhinjam. The march was carried out to compassionate with the people who were attacked by the violent anti-Vizhinjam Port agitators. The march was supposed to traverse from Mukkola to the port gate at Mulloor, the Hindu majority area  where no Latin Catholic or Muslim family lives.

Venganoor Gopan, leader of Janakeeya Samara Vedi, the organization which observes sathyagraha,  in favour of the earliest completion of the port construction, told the media persons that Government of Kerala (GoK) and district collector are giving absolute supports to the violent agitators. Despite the High Court order to remove the pandal of the violent agitators, government has not moved even a little finger to do it. But, the same people stops the Hindu Aikya Vedi march and stop the people from participating in it. Police have erected barricades everywhere, even in front of a temple.

Another Hindu leader Vishnupuram Chandrasekharan said that GoK appeases Latin Catholic priests. Police has parked several vehicles around the pandal of the anti-port agitators to shield it. The same police and government do not respect the order of the High Court to remove that pandal. Hundreds of women who came out of their houses to participate in the rally could not join due to police barricades in every nook and corner.

The police stopped the rally approximately 500 metres away from the meeting venue. Then the Hindu activists held the peaceful meeting there itself.

Hindu Aikya Vedi state president Smt. Sasikala Teacher addressed the rally there. She asked the anti-agitators where were they until eighty percent of the port construction was over. The country is badly in need of Vizhinjam port. Government of Kerala (GoK) should respect the High Court and its order. She blasted the GoK led by chief minister Pinarayi Vijayan for not taking any action against the Latin Catholic priests and their goons for attacking the police men and leaving 52 of them badly injured. Her movement won’t care the anti-Hindu attitude of CPM. Hundreds of Hindu houses in Mulloor were attacked, several people, including pregnant women, were injured. Police kept away from the scene. Teacher said, her organisation does not care about the barricades erected in all roads leading to the rally site nor several letters issued to her organization by police. All were threatening to take actions against the organisers. She said, those letters do not have value of even the pieces of paper they are printed on.

Sasikala Teacher said that, in 2018, GoK unleashed all sorts of atrocities against Ayyappa devotees during Sabarimala pilgrimage season, all in the name of Supreme Court verdict. He brought two controversial young ladies to the shrine during the wee hours to make sure that the traditions are violated. Cases were charged against thousands of devotees for participating in prayer rallies. Even women were lathi-charged. Several devotees were injured and hospitalised. The same Pinarayi shies away from implementing High Court order in connection with the Vizhinjam port issue. The same CM ties the hands of the police when they are attacked and when the goons attack the poor Hindus in Mulloor. This is blatant double standard.

Teacher ridiculed the Congress MLA of the constituency who is alleged to be supporting the Latin Catholic Church in Vizhinjam issue. This people’s representative has never gone to Mulloor after the innocent and helpless Hindus were attacked by the anti-port agitators.

She said, the rally is to express total solidarity with the people who support the port construction. She asked the large police force deployed there whom are they afraid of. Who have tied up their hands when the anti-national forces rule the roost.

She said, she suspects the ruling apparatus’s support to the attempts to kill the Vizhinjam port project. The project gives sleepless lights to Dubai, Sri Lanka, China and Singapore. She has got her own doubts about PInarayi’s frequent Dubai visits in this context. She demanded a probe into the foreign hands behind the anti-port stir.

Sasikala Teacher declared that the entire Hindu society will rally round the Hindus in Mulloor if they are attacked again. Hindu orgaisations will not be silent spectators. Because, people do not get justice from GoK and its police. Even policemen do not get justice. The police station attack in Vizhinjam has sent a message to the entire world that Kerala undergoes anarchy.

As the organisers had declared prior to the rally, the entire programme was peaceful. The police force brought in from Kollam and Thiruvananthapuram districts had no job to do.

Police registered a case against March; State president KP Sasikala made the teacher the first accused