Trupti Desai who vowed to visit Sabarimala is blocked by devotees at Kochi airport. 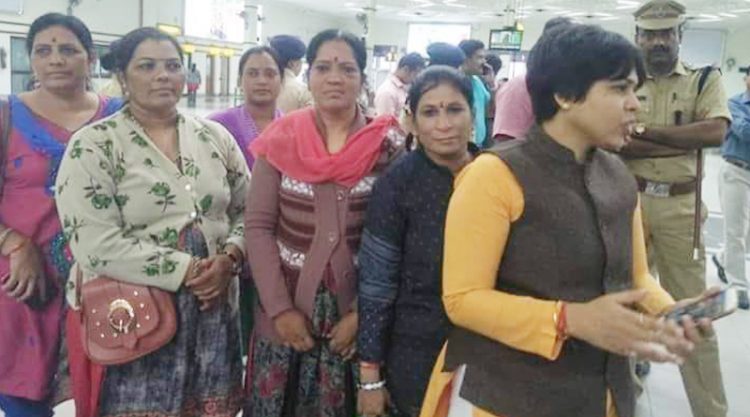 ShareTweetSendTelegram
Trupti Desai is blocked by devotees in Kochi airport. She, along with five companions, landed at Kochi International Airport at 4.40am, but she has not succeeded to come out, thanks to the strong protest blockade staged by the devotees. Police try their level best to take her out and lead to Sabarimala. Hindu Aikya Vedi (HAV) president K.P. Sasikala Teacher asks Trupti to go back. But, Desai made it clear that she would go to Shabarimala at any cost. DG of Police says, so far no decisions have been taken regarding the security for Desai.
Now, police try to take her out through cargo gate. But, devotees have taken care of that route. Industries minister E.P. Jayarajan, the blue-eyed boy of the CM Pinarayi Vijayan camps in Aluva, the town nearest to the airport. More and more protesters join the airport blockade. A good number of them are women.
Hindu Aikya Vedi general secretary R.V. Babu says, Desai will never be allowed to proceed to Shabarimala. He added that, they are confident of convincing Desai and sending her back if they get a chance to discuss with her.
Police checking is beefed up along Kochi-Kottayam route. The idea is to provide security for Desai if takes this route. The Government of Kerala did not ask her to cancel her programme. The Chief Minister says, young women’s temple entry will be facilitated at any cost. The same time Travancore Devaswom Board chairman A. Padmakumar says, TDB will file an application before the Supreme Court requesting for more time to implement the court’s order to permit the women of all ages to enter the shrine. This move sounds like a game plan: On one hand, the regime tries to establish that they understand the devotees’ sentiments. On the other, CM goes ahead with his iron fist to implement the September 28 verdict.
ShareTweetSendShareShare