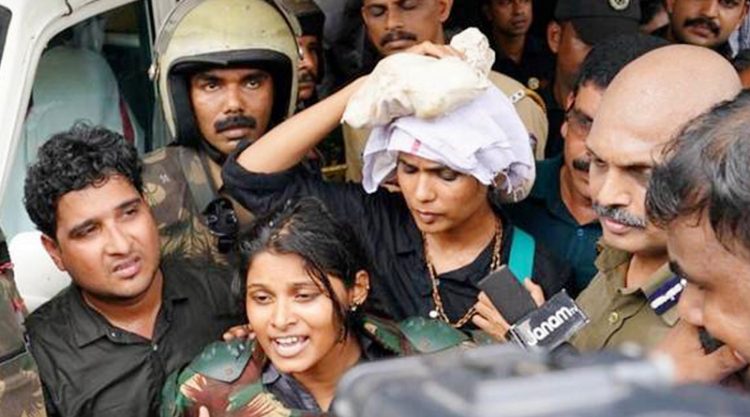 Controversial Muslim activist Rehana Fathima who made an aborted bid to visit Sabarimala has been arrested from her work, BSNL offices, Palarivattom, Kochi. She shot into infame for posting obscene pictures in Facebook for hurting the religious sentiments of Hindus. During the Thulam season of Sabarimala shrine, she, along with another girl with alleged Maoist links, had attempted to violate the temple traditions by entering there. And, both got the protection and escort of a 100-strong police team led by an IG of Police. They were given police uniform to hide their identity. But, they could not reach the “holy 18 steps”, thanks to the strong namajapa protests by thousands of devotee. Rehana had claimed that she would carry used napkins in the holy “irumudikkettu” a devotee is supposed to carry on one’s head for scaling the “holy 18 steps”. Both came to Sannidhanam as the “most favourite devotees” of the Pinarayi Vijayan regime.

She made her attempt to violate the temple traditions after BJP leader B. Radhakrishna Menon filed a case against her in connection with the aforementioned FB post. Her attempt to visit the temple even after asserting several times that she was not a believer was with sinister intentions. There is every reason to believe that it was part of a large conspiracy to engineer communal riots not only in the state, but also in the whole country. But for the matured and nonviolent protests led by Sangh leaders the situation would have been different.

After that dirty drama, Kerala high court rejected her anticipatory bail couple of weeks before. Still Pinarayi’s police did not bother to arrest her. Some pro CPM brass in BSNL kept on protecting her. When the pressure and protest of the devotees and BJP Mahila Morcha mounted, BSNL’s higher echelon tansferred her to couple of BSNL offices within 2 to 3 km range, of course within Kochi city. It was another dirt drama. After the Sabarimala drama, she addressed several anarchist programmes in Agali, Tribal zone of Attappadi in Palakkat district and near the Kerala high court. The Pinarayi government was trying to ridicule of the people of Kerala in general and devotees in particular by opting not to arrest her. Now, since illegal incarceration of BJP leader K. Surendran has invited the wrath of the people, government has made the arrest move with utmost hesitation.

IPC Section 153-A has been slapped on her for promoting religious enmity, etc. Since the case has been registered in Pathanamthitta police station, she has been taken there. It is too early to say if she is going to get bail even though 153-A is for unbailable offences.