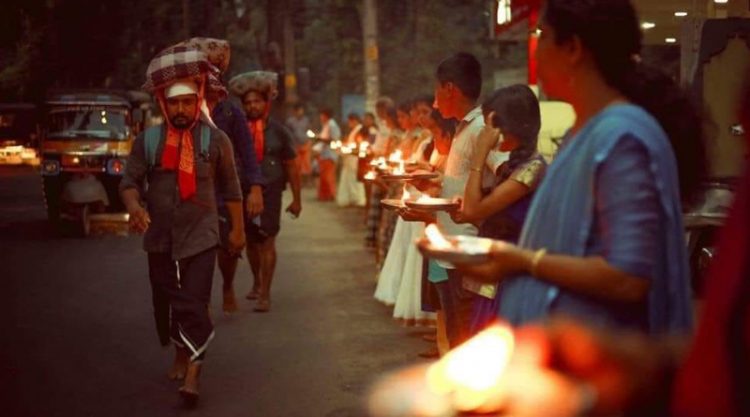 Dec 26 2018: Buoyed by the success of Ayyappa Jyothi, in which lakhs of people lined up from Hosangadi in Kasargod to Kanyakumari, covering a distance of 795 km, lighting lamps and vowing to protect the age-old customs of Sabarimala, leaders of the Sabarimala Karma Samithi (SKS) demanded that the authorities respect the sentiments of devotees.

The jyothies were also lit in front of the Secretariat in the state capital where BJP state president, PS Sreedharan Pillai, former union minister O Rajagopal and General secretary Shobha Surendran, were among those who participated. An elderly woman participant said, “We lit the Ayyappa Jyothy against the entry of young women at the Sabarimala temple”.

“Around 21 lakh devotees participated in the programme outside Kerala. People gathered in large numbers and lighted lamps in 11 states reflecting the sentiments of devotees.  Gatherings were organised at 310 places which was graced by many prominent leaders. The jyothi was lighted at 11 other states as well.

The decision to light the “wall of Diyas” was aimed at countering the CPI(M)-led LDF government’s proposal for a “women’s wall” across the state on January 01.

The first phase of the two-month-long Mandala puja will come to a close tomorrow and so far no women in the ‘traditionally barred’ age group of 10-50 years has succeeded in offering prayers at the shrine, since the September 28 apex court verdict.

Over 20 young women had unsuccessfully tried to reach hill shrine and offer prayers but had to return following protests by devotees.