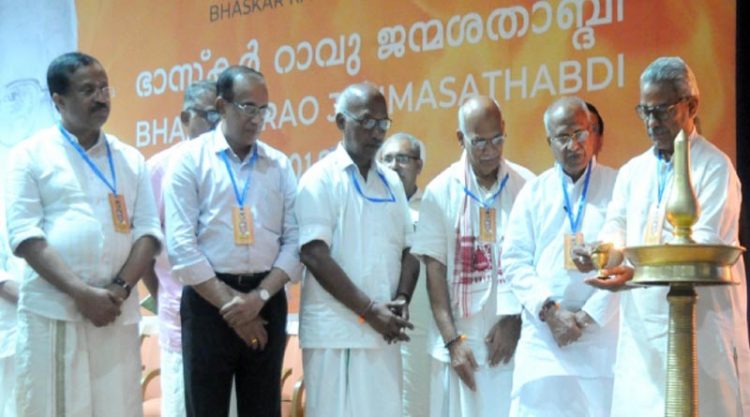 ShareTweetSendTelegram
Kochi witnessed a noble, idealistic and nationalistic program on October 5, 2019. It was the culmination of the centenary celebrations of late Bhaskar Rao, the legendary Sangh pracharak, former Kerala Pranth Pracharak and former national organising secretary of Akhil Bharatiya Vanvasi Kalyan Ashram. RSS Sah Sarkaryavah Dr. Krishnagopal inaugurated the day-long program at Bhaskareeyam Convention Centre dedicated to the ecstatic memories of the late great leader who is known as “Kerala’s Doctorji”, an affectionate reference to RSS founder Dr. Keshav Baliram Hedgewar. The lifestyle and organisational methodologies of Bhaskar Raoji were very much similar to those of Doctorji hence the nickname “Kerala’s Doctorji”.
Madhu S. Nair, the Chairman & Managing Director of Cochin Shipyard Limited and the celebration committee chairman presided over the program.
Hon. Union Minister of State for Foreign Affairs and Parliamentary Affairs V. Muraleedharan delivered the keynote address. The minister said that if Bhaskar Raoji, who worked and lived for ideology for more than three decades, belonged to some other organisation, a lot of statues and memorial monuments would have been built throughout the state, a lot of books would have been penned. A sincere account of the real renaissance in the state can not ignore Bhaskar Rao ji. He played a significant role in the state’s social reforms. Minister added that Kerala deviates from the mainstream; it is a dangerous trend.
RSS Sah Sarkaryavah Dr. Krishna Gopal said that when Bhaskar Rao was leading RSS in Kerala, Communists came to power; they were the days when Christian-Muslim forces were ruling the roost. He added that the social reforms brought in by Bhaskar Raoji were remarkable not only in Kerala but also in the northeastern states.

RSS former Akhil Bharatiya Boudhik Pramukh Ranga Hariji told that Bhaskar Rao upheld the spirit of Hindu unity. Activities for the Hindu unity had taken place in different parts of the country from 1920 to 1935. Bhaskar Rao kicked it off in Kerala wielding his most powerful arm, the spotless and perennial love.

Union Minister Muraleedharan felicitated Smt. Kunjachechi who has been working for the Vanvasis for the last 32 years. Hundreds of workers from over Kerala including RSS and Sangh-inspired movements came together to pay homages to their Kerala Doctorji.

Tarun Vijay told in his speech that the conversion among the Vanvasis has nothing to do with religious sentiments but for disintegrating Hindus and then the nation.

Ramanunni, senior RSS pracharak and the director of PEEP (People’s Action for Education & Economic Development of Tribal People), the organisation for the welfare of the Vanvasis, told that land mafia, bureaucracy and political leaders are the enemies of the Vanvasis.

RSS Prant Karyavah P. Gopalankutty Master said that the real homage to Bhaskar Raoji is to take up one or another mission which is a part of the Sangh activity.

Addressing a seminar in connection with the centenary celebrations, Adv. Subhash Chand said that social justice and economic justice are included in Bharat’s constitution, but no provision for environmental justice in it. It adversely affects the protection of vanvasis and environment.

Vanvasi Kalyan Ashram state president K.C. Paithal wondered what stops the state government from implementing the court verdict for giving the lost land back to vanvasis; the same government is keen to implement the court verdicts for several other issues. Dr. K. Vanaja said that vanvasis used to enjoy perfect freedom in the forest, but now they are under strict orders and rules. We should shed the feeling that vanvasis are different from us. RSS Dakshin Kshetra Sanghachalak Dr. Vanniyarajan released a book on Bhaskar Rao by giving a copy to vanvasi leader Palliyara Raman. The book was authored by S. Sethumadhavan. Dr. Vanniyarajan said Bhaskar Rao was a sun who created thousands of suns.