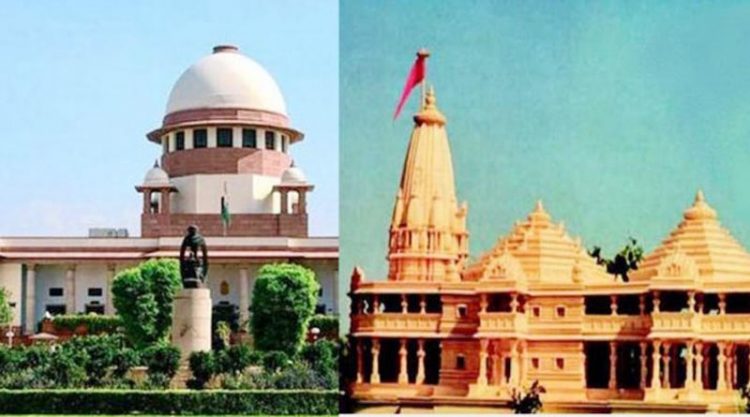 A five-judge Supreme Court bench is reading out a unanimous verdict on the decades-old Ram Mandir-Babri Masjid title dispute. It says that the Archeological Survey of India report on the underlying structure can’t be dismissed and that Babri Masjid wasn’t constructed on vacant land. It adds that the underlying structure was not of Islamic religion, but the ASI report hasn’t said the underlying structure was a specific temple. It further says that the Sunni Waqf Board’s suit is maintainable but “Muslims can’t assert the right of adverse possession”. Mere evidence of the existence of a pre-dated structure can’t be the sole basis to give the tile today, the bench says on Sri Ram Lala Virajman. The Shia Waqf Board’s claim on the Babri Masjid has been unanimously dismissed and the Nirmohi Akhara has also suffered a setback. The bench ruled that the Nirmohi Akhara suit is barred by limitations and said the Akhara isn’t a shebait.

The Ayodhya title suit verdict comes nine years after the 2:1 judgment of the Allahabad High Court that ordered a three-way division of the disputed 2.77 acres of land between the three parties — Ram Lalla, Sunni Waqf Board, and the Nirmohi Akhara. The Lucknow Bench of the High Court, on September 30, 2010, held that Hindus and Muslims as joint title holders of the disputed land.

Elaborate security arrangements have been made across the country in view of the Babri Masjid-Ram Janmabhoomi ruling. Ayodhya in Uttar Pradesh is on the edge with massive police presence and political leaders, including Prime Minister Narendra Modi, and religious leaders have urged people to maintain peace and respect the verdict. The Uttar Pradesh government has ordered the closure of all educational and training institutes till Monday.

The High Court held that the land below the central dome, where idols of Lord Ram and other gods have been placed in a makeshift temple, belongs to Hindus. The three judges agreed that Hindus should get the portion under the central dome. The Allahabad High Court judgment ran into an excess of 6,000 pages. The High Court verdict was challenged in the Supreme Court, which ordered a stay on it on May 9, 2011.

Advancing their arguments in Supreme Court, the Hindus parties have told the apex court that the faith of Hindus cannot be partitioned and claimed possession over the entire dispute site. Nirmohi Akhara, which claims to be ‘Shebait’ (a devotee who serves the deity), has contested the maintainability of the Ram Lalla lawsuit. Akhara has told the apex court that the piece of land is the birthplace of Lord Ram and it belongs to it. Ram Lalla counsels argued that Shebait, for the time being, is the only person competent to safeguard the interests of the idol, his possession of the dedicated property is the possession of the idol.

Earlier, the Supreme Court ordered mediation to resolve the vexed issue but it failed. Finally, in August, the top court began hearing in the case. This politically-sensitive matter has already been the second-longest case heard by the apex court in its history.

Multi-layered security arrangements have been put in place in the temple town of Ayodhya, which has been turned into a fortress with the deployment of sixty companies (90-125 personnel each) of the PAC and paramilitary forces. Drones and CCTV cameras were also being used to monitor the situation. Be it the area near the Ramjanmabhoomi police station, “karyashala” of Ram Janmabhoomi Nyas or other parts of the town, policemen were diligently checking all vehicles. Uttar Pradesh Chief Minister Aditynath reviewed the law and order situation in each district and appealed for peace.

A similar review meeting was also held in other states following a general advisory issued by the Ministry of Home Affairs (MHA) on Thursday asking them to deploy adequate security personnel at all sensitive places. Delhi Police has beefed up security across the national capital and stepped up patrolling in sensitive areas in the city, officials said, adding social media platforms will also be monitored, the police said. Delhi Police will also initiate strict legal action against those found indulging in any activity which may adversely affect the peace and tranquillity of the society, a senior police officer said.

Social media posts and WhatsApp messages that incite communal hatred or violence would draw severe punishment, including a jail term, for offenders, the Gautam Buddh Nagar administration said on Friday. The offenders would not only be arrested but action against them would be taken under the Gangsters Act and the National Security Act (NSA), District Magistrate B N Singh said in an official statement. The Noida Police also carried out a flag march in mixed population areas and densely crowded locations.

Prime Minister Narendra Modi had on Wednesday asked his ministers and party leaders to refrain from making unnecessary statements on the Ayodhya issue and maintain harmony in the country, according to sources.

Clerics and priests of various faiths also renewed their appeal to people to honour the Supreme Court verdict on the Ram Janmabhoomi-Babri Masjid dispute and respect religious sentiments. “We should all respect the judgment. We should exercise restraint and not hurt religious sentiments of any community,” Imam of the Lucknow Eidgah Maulana Khalid Rasheed Firangi Mahali told PTI. He said an all-religious meeting was recently organised at the Islamic Centre here to discuss several aspects before the judgment.

Father Donald De Souza, Chancellor of the Catholic Diocese of Lucknow told PTI: “Ours is a functional democracy, and rule of law has to be followed by all. The court’s judgment has to be fully respected by everyone without any bias. This is called ‘sanskaar’.”

The apex court had on August 6 commenced day-to-day proceedings in the case as the mediation proceedings initiated to find the amicable resolution had failed. Fourteen appeals have been filed in the apex court against the 2010 Allahabad High Court judgment, delivered in four civil suits, that the 2.77-acre land in Ayodhya be partitioned equally among the three parties — the Sunni Waqf Board, the Nirmohi Akhara and Ram Lalla.