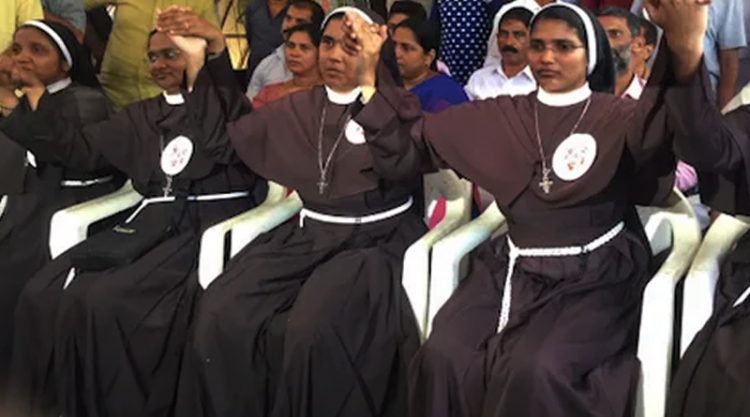 After the passage of Kerala Madrasa Teachers’ Welfare Fund Bill 2019 in Kerala assembly, the CPM-led LDF Government is now all set for introducing pension scheme for nuns. The Times of India has reported that the state government has already started the groundwork for ‘considering mounting pleas by nuns for security pension in the state’.

Times of India reported that ‘the social justice department has been asked to undertake a detailed study on the status of nuns above 60 years of age in the state and the financial commitment that the state will have to bear for bringing them in the category under the old-age pension scheme.’

Nuns belonging to various Catholic Church-run convents in the state had given representations to the government, demanding security pension. According to the TOI report, the Mount Carmel Convent at Malayattoor demanded pension for aged nuns. Going a step further, St Anne’s convent at Thiruvananthapuram demanded a pension scheme for all unmarried women above 50 years, under which all nuns in the state can naturally claim the benefit.

In a recent study conducted by the Ex-Priest and Ex- Nuns Association, about a hundred nuns have left churches in Kerala and settled in foreign countries, mainly due to sexual harassment.

Nowadays, Kerala is witnessing a shortage of nuns as fewer women are interested to dedicate their life to the church. Though it is a global trend, the decline in the number of nuns in the state has posed a greater challenge to the Church as Kerala was the largest exporter of nuns to the rest of the country and even abroad. As per a report, “now more women are embracing a life of prayer and poverty and work for the salvation of others in states such as Chhattisgarh, Jharkhand, Odisha, Assam, and Himachal Pradesh. In Kerala, “there is a 70-75% drop in the number of women who were joining convents to be nuns,” says an auxiliary bishop of the Syro-Malabar Catholic Church. The decision of the Kerala Government to introduce the pension scheme for Catholic nuns may be viewed in this context.

In 2019, the Kerala Assembly passed the Kerala Madrasa Teachers Welfare Fund Bill, 2019, seeking to give a pension in Rs 1500-7500 range to the madrasa teachers across the state. Among the other benefits are interest-free housing loans of 2.5 Lakhs and financial aid for treatment (Rs 5000 to Rs 25000). The female teachers will get Rs 15000 for maternity-related expenses twice in a lifetime. Dependents of madrasa teachers who are studying in professional courses will get fees equivalent to that of government fees in respective courses. Posthumous financial assistance of Rs 10000 to Rs 50000, funeral expenses, family pension, financial support for medical treatment, etc. are also part of the scheme. There are 21683 madrasas in Kerala, and 204683 teachers are working in those madrasas.