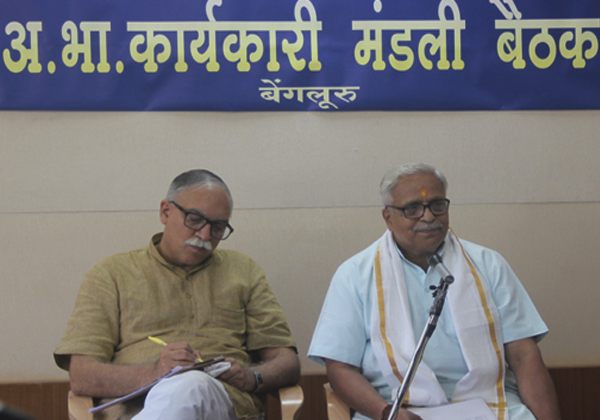 Akhil Bharatiya Karyakari Mandal of the RSS heartily congratulates the Parliament of Bharat and Union government for passing the Citizenship Amendment Act 2019 with a view to resolve the complexities and simplify the process of granting citizenship of Bharat to Hindus, Sikhs, Buddhists, Jains, Parsis and Christians who came to Bharat due to religious persecution in the neighbouring Islamic states of Pakistan, Bangladesh and Afghanistan.

Bharat was partitioned in 1947 on the basis of religion. Both the countries had assured safety, honour and equal opportunity to the minorities on their respective sides. Bharat- both the state and the society- have fully protected the interests of the minorities living within her geographical boundaries and the state has formulated policies with constitutional guarantee for their safety and development. On the other hand, the countries formed after separation from Bharat failed to provide such an environment despite the Nehru – Liaquat Ali pact and assurances from leaders from time to time.  The minorities living in those countries were subjected to a new kind of slavery characterised by continuous incidents of religious persecution, grabbing of their properties and atrocities on women. The governments there also encouraged persecution of these minorities through discriminatory policies and unjust laws. As a result, minorities from those countries were forced to flee to Bharat in large numbers. Clear testimony to this fact is the sharp decline in the population percentage of minorities in those countries after Partition.

It should always be remembered that the Bharatiya society traditionally living in those regions have significantly contributed towards preservation and nourishment of Bharatiya culture and also to freedom struggle. It, therefore, becomes the moral and constitutional obligation of the Bharatiya society and government of Bharat to protect the interests of these persecuted minorities. In the last seventy years, discussions were held in the parliament many times for these brethren and several provisions were made by successive governments from time to time. But due to procedural complexities, large numbers of people were deprived of their right to citizenship till today and continued to live in an environment of uncertainty and fear. As a result of the present amendment such people will live a life of dignity.

The government, during the debates in parliament and subsequently, has clarified from time to time that this Act will not affect any citizen of Bharat. The ABKM expresses satisfaction that necessary provisions were made to allay the apprehensions of all the inhabitants of the North Eastern region. This amendment is for providing citizenship to the unfortunate victims of religious persecution of those three countries who have come to Bharat and not for taking away the citizenship of any citizen of Bharat. However, by creating an atmosphere of imaginary fear and confusion in the minds of a section of people, the jihadi-Left combine with the support of selfish political parties involved in communal politics and some foreign forces are making nefarious efforts to spread violence and anarchy across the country. ABKM strongly condemns such activities and demands the Governments concerned to thoroughly investigate and take appropriate action against these forces who are trying to destroy the communal harmony and national integrity.

The ABKM appeals to all the sections of the society especially the vigilant and responsible leadership to understand the issues on hard facts and play an active role to defeat the anti national designs and create an amicable atmosphere in the country.