A communist-Jihadi plot to destroy lock-down in Kerala 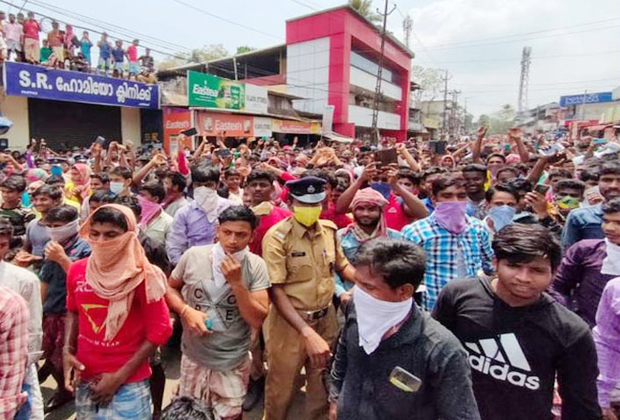 When the whole world, including WHO were praising the Indian way of fighting the deadly corona virus, a drama was being scripted by the Left-Jihadi-urban naxal nexus. When a huge mass who got stuck in the capital city were living their life with the food and facilities provided by the government and other social organizations a news arose suddenly from nowhere. There are buses going from Delhi to the interiors of UP, if started now they will get it. The poor people were misinformed and they all ran taking whatever they have with the hope of reaching their homes. The nature of the news and the way it got spread shows a perfectly executed Jihadi-Left plan to demolish the nation’s effort to fight the deadly disease. A jihad aimed at the destruction of thousands of Indians and a cruel intention to spread the virus all over might have been the plan.

This news was well celebrated by the media.Kerala media was in front to propagate this. The communists jumped over as if they got a prey. LDF Finance minister Thomas Isaac was in the front with his rigorous criticism. Isaac who is now upset over the acceptance getting for Chief Minister Pinarayi Vijayan took this as an advantage to defame the central government.

While the communists were celebrating the situations in Delhi an unusual gathering happened in the Paippad town near Changanassery in Kerala. Thousands of workers from other states are staying there of which most of them are Bengalis. Several among them are said to be be illegal Bangladeshis. On 29th march morning they suddenly gathered together amidst the locked down orders. They demanded food, water and also transportation facility to reach back their homes. Government and authorities have assured that proper food and water are being given to them. But this sudden unusual gathering indicates that there is a Jihadi-Left agenda behind this. A repetition or a replica of Delhi was planned here. From nowhere a message was spread among these workers and they gathered together. Reports say that messages were spread through whatsapp. Even some communists are saying that a channel owned by Jama ate islami had reached their earlier and had provoked the people to gather. Minister Thomas Isaac in his facebook post was literally crying for the interstate workers of Delhi. The sentimental messages from people like Isaac could have triggered this act. It is evident that if the lock down in India is broken the Jihadis will be successful in spreading this dreadful corona disease and destroy our country. So a well planned agenda might have been set up in the backstage to defame our nation.