"Amnesty’s failure to comply with local regulations does not entitle them to make comments on the democratic and plural character of India", MHA's statement 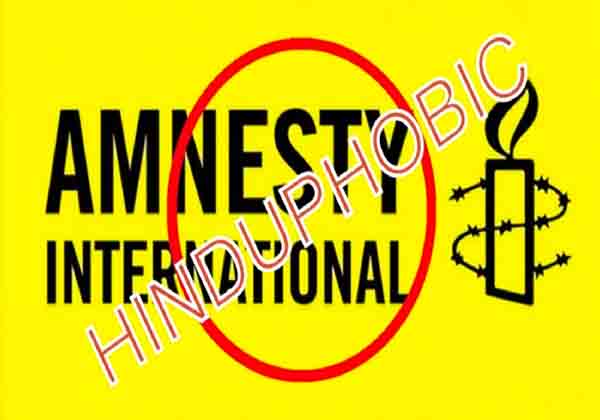 Controversial NGO Amnesty International halted its India operations. In a statement issued, Amnesty India said it has decided to take this step following the complete freezing of its bank accounts by the Central government.

The complete freezing of Amnesty International India’s bank accounts by the Government of India which it came to know on 10 September 2020, brings all the work being done by the organization to a grinding halt. The organisation has been compelled to let go of staff in India and pause all its ongoing campaign and research work. This is latest in the incessant witch-hunt of human rights organizations by the Government of India over unfounded and motivated allegations, Amnesty International India said today.

Calling the government’s move to freeze their bank accounts, “a witch hunt”, the NGO which allegedly has links to British Govt and Islamist orgs, alleged that their “investigations” in the North-east Delhi riots, and Jammu and Kashmir, post the abrogation of Article 370 were the reason behind the crackdown. “Amnesty International India stands in full compliance with all applicable Indian and international laws,” the organisation claimed in a statement.

“The continuing crackdown on Amnesty International India over the last two years and the complete freezing of bank accounts is not accidental. The constant harassment by government agencies including the Enforcement Directorate is a result of our unequivocal calls for transparency in the government, more recently for accountability of the Delhi police and the Government of India regarding the grave human rights violations in Delhi riots and Jammu & Kashmir. For a movement that has done nothing but raise its voices against injustice, this latest attack is akin to freezing dissent,” alleged Avinash Kumar, Executive Director of Amnesty International India.

Putting out the facts regarding the dubious financial dealings of Amnesty India, the MHA press release said that the NGO had received permission under the Foreign Contribution (Regulation) Act (FCRA) only once and that too in the year 2000. “Since then Amnesty International, despite its repeated applications, has been denied FCRA approval by successive governments since as per law it is not eligible to get such an approval”, said the MHA.

It further says that in order to circumvent the FCRA regulations, Amnesty UK remitted large amounts of money to four entities registered in India, by classifying it as Foreign Direct Investment (FDI). A significant amount of foreign money was also remitted to Amnesty (India) without MHA’s approval under FCRA. “This mala fide rerouting of money was in contravention of extant legal provisions”, says MHA.

The Foreign Contribution Regulations Act (FCRA) licenses of around 13 NGOs and associations has been suspended by the Ministry of Home Affairs (MHA).

“Owing to these illegal practices of Amnesty, the previous government had also rejected the repeated applications of Amnesty to receive funds from overseas. This had led Amnesty to suspend its India operations once during that period as well. This bipartisan and purely legal approach towards Amnesty, under different governments, makes it clear that the entire fault lies in the dubious processes adopted by Amnesty to secure funds for its operations”, says MHA’s scathing response.

The press release further says that all the glossy statements about humanitarian work and speaking truth to power are nothing but a ploy to divert attention from their activities which were in clear contravention of laid down Indian laws. “Such statements are also an attempt to extraneously influence the course of investigations by multiple agencies into the irregularities and illegalities carried out over the last few years”, it says.

It then clarifies that Amnesty is free to continue humanitarian work in India, as is being done by many other organizations provided it follows the laws of the land and does not interfere in domestic political debates using entities funded by foreign donations. “This law applies equally to all and it shall apply to Amnesty International as well”, says MHA.

“India has a rich and pluralistic democratic culture with a free press, independent judiciary and tradition of vibrant domestic debate. The people of India have placed unprecedented trust in the current government. Amnesty’s failure to comply with local regulations does not entitle them to make comments on the democratic and plural character of India”, concludes the MHA’s stinging response to the charges leveled by the NGO.

In 2019, the ED had initiated an investigation against AI for violating the Foreign Contribution Regulation Act (FCRA). The government has stated that Amnesty International was never registered in India under the FCRA.

Furthering the propaganda of Pakistan, at the behest of a group of US Democrats, Amnesty had participated in a US Congressional hearing on the alleged human rights violations in Jammu and Kashmir and launched a hate campaign against the Government of India. Amnesty has also been constantly trying to paint the anti-Hindu Delhi Riots a pogrom against Muslim riots, portraying Hindus as its perpetrators.