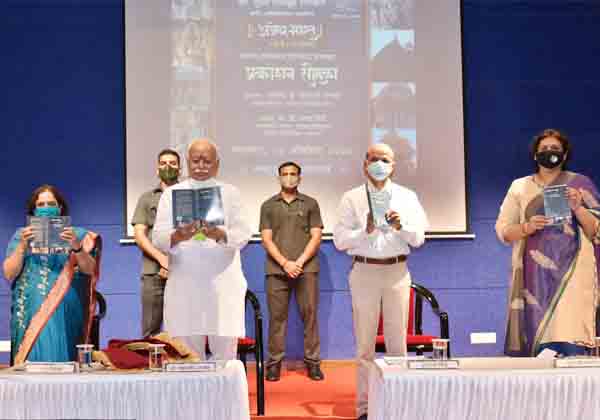 Pune : In the tradition of our glorious history of thousands of years, many diversities have been created. The result of this integrated, communicative and harmonious collection of all those diversities is the Hindu society, that is today’s India. This is the period during which the process of formation of Hindu society was completed (5th century to 12th century). This is our glorious history that must be told to the world. It is equally important to know it for our progress. This statement was made by Sarsanghachalak Dr. Mohan Bhagwat.

The release ceremony was presided over by the Director General of the National Maritime Heritage Complex and senior archaeologist Dr. Vasant Shinde. Writer Sudha Risbud and Continental Publishing’s Devyani Abhyankar were present. The event was held in the Ganesh Hall of the New English School in the presence of selected guests.

This time the event was organized subject to all the rules regarding corona infection. The event was attended by dignitaries from various fields.

When British came to know that it was not easy to rule India without breaking the independent system of non-government, they began to destroy and teach our glorious history wrongly. Our glorious tradition, factual evidence suppressed. A distorted analysis of the evidence that was put forth. He said that this attitude was deliberately distorted by some scholars with the help of foreigners.

The conclusions are presented before and then evidences of convenience, references are put in front of us while framing the history here. But the truth and visible thing is not accepted. The research done on Harappan culture in Rakhigadhi can be seen as a good example of this, Bhagwat said.

In his presidential address, Dr. Vasant Shinde explained the importance of telling history to our new generation, he also said that Sudha Risbud has researched all the available tools and has compiled a comprehensive history through the book ‘Ajey Bharat’.

Despite many invasions of India, its culture still survives today. Many of the things in our culture today were also found during the excavations of Harappan culture. After many years of research, it has been proven with all the evidence that we all have a single descendant from Afghanistan to Bangladesh for the last ten thousand years.

At this time, writer Sudha Risbud had to come up with the history of the glorious period of India from the 5th century to the 12th century. But no one dared to put forth that. She said that she had tried to write this history keeping this need in mind. Devyani Abhyankar explaines the role of the publisher. The program was moderated by Sudhir Gade. Pasaydana concluded the program.