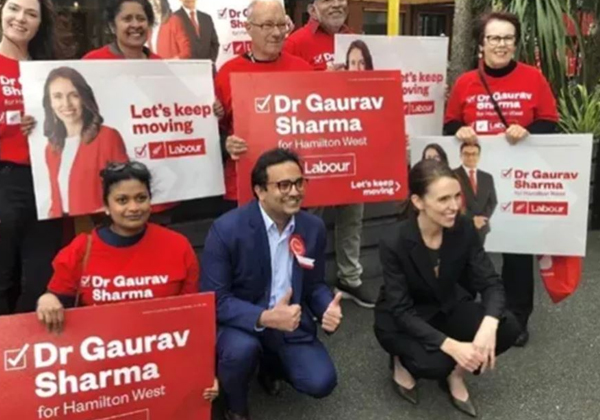 In a historic moment, Indian-origin Dr. Gaurav Sharma, who was elected as a member of the New Zealand Parliament on Wednesday took oath in Sanskrit.

The 33-year-old, Dr. Gaurav Sharma originally hails from Hamirpur district in Himachal Pradesh and had won the election as a Labour Party candidate from Hamilton West.

Many appreciated but some also came up with remarks stating the gesture as “religious oppression & caste superiority”. Michael Field, a New Zealand-based journalist, in a tweet, said, “How is it that new Labour MP is sworn in at New Zealand Parliament using a language of religious oppression & caste superiority? Sanskrit is mark of Hindutva – mark of fundamentalism. What of Labour’s working class values or is Gaurav Sharma a token?”

Responding to this, Sharma replied, “Kia Ora Michael, I speak multiple Indian languages and wanted to choose a language that would represent wide range of current languages spoken in India. At over 3500 yrs old Sanskrit is the oldest & considered the mother language of many Indian languages that originated from it.”

Further, he also added, “I studied Sanskrit at a small school in a rural part of India where it is a compulsory part of education curriculum for every student, not just one class or culture. Taking a jibe at the journalist, he remarked, “If you do want to talk about oppression and class divide, a bit ironical that your mother tongue and your tweet is in English. Colonialism…”

When asked the reason behind choosing Sanskrit and not Hindi, Dr. Gaurav Sharma wrote on Twitter, “To be honest I did think of that, but then there was the question of doing it in Pahari (my first language) or Punjabi. Hard to keep everyone happy. Sanskrit made sense as it pays homage to all the Indian languages (including the many I can’t speak).”

A doctor by profession, Sharma won from the Hamilton West by defeating Tim Macindoe of the National Party by over 4,386 votes. He had moved to New Zealand in 1996. Remembering the early struggles his family had to do to survive in the foreign country, Sharma told to a private media that his family had seen a tough time initially as his father could not get a permanent job for six long years. “I am in politics for social service, as my family has gone through a lot of hardships. What really helped us was social security, which New Zealand did really well – not so much now, though.”