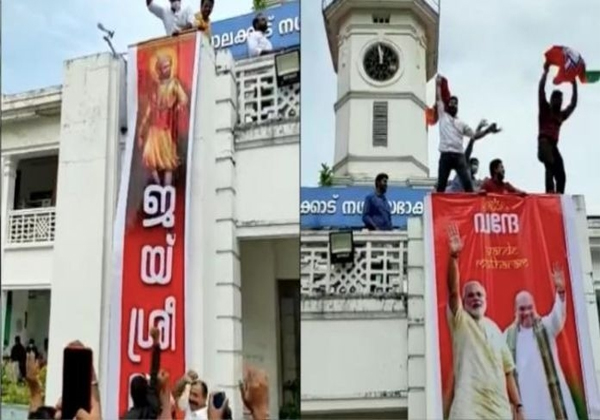 In yet another incident which shows the politicisation of Police in Kerala, Kerala police have filed a case against BJP workers for unfurling a giant banner of Chhatrapati Shivaji Maharaj at Palakkad Municipality. BJP had retained the municipality by winning 28 seats out of 52. During the victory celebration, BJP works unveiled a banner of PM Narendra Modi and Union HM Amit Shah along with another banner of Shivaji Maharaj with the slogan ‘Jai Shri Ram’ written on it. This irked the Islamo- Marxist media personals who made it sensational news. Following this, there were abusive posts in social media targeted at Shivaji Maharaj’s legacy and the slogan ‘Jai Shri Ram’.

The case has been registered on the sections related to’ trying to destroy communal harmony’. While Islamist political parties like the Muslim League, SDPI, Welfare Party and PDP flouts their religious affinity openly and make provocative speeches, Kerala police have never dared to interfere with it. But when the legacy of Shivaji Maharaj is celebrated, under political pressure, the police swiftly filed a case. “The special branch deputy superintendent has been asked to file a report with regard to the incident,” district police chief Sujithdas S told PTI.

CPM is rattled after seeing BJP displacing Congress as the principal opposition party in Kerala. In the recently concluded state local body election, BJP opened its account in many Communist Party strongholds and finished second in a large number of seats.