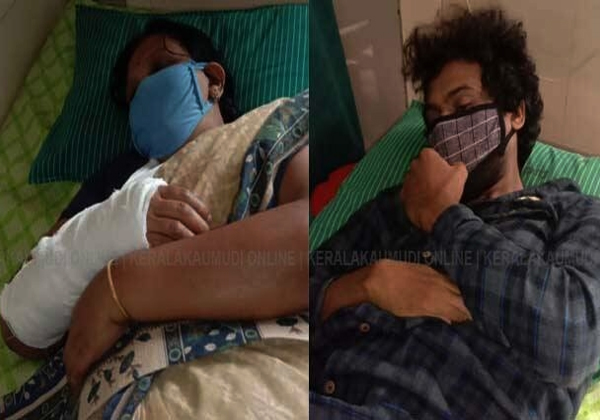 A Hindu boy, Abhinanth (27) and his mother Lekha (48) were attacked by Islamists in Kerala over Abhinanth refusing to convert to Islam after marrying a Muslim girl. Lekha’s hand is broken and Abhinanth was hit on the head with an iron rod. Both of them are admitted to the Karothukuzhi hospital in Aluva. On Friday relatives of the girl entered Abhinanth’s rented home and asked him to either convert to Islam to sign divorce papers. When he refused to accept the conditions made by her relatives, including the Muslim girl’s mother and her sister’s husband, started to attack Abhinanth and his mother.

Abhinanth and the Muslim girl had married three years ago and stayed together for one and a half year. In the meantime, there were many attempts made to take her away from her husband. The girl is now in the custody of her parents, but still maintains contact with Abhinanth. Abhinanth has made it clear that he is unwilling to change his religion and if his wife needs divorce she should ask him directly. The attacking team consisted of 11 members.

Incidents like these show the growing radicalisation of Muslims in India. If a protest is lodged when a Muslim boy marries a Hindu girl just for conversion, the so-called human rights organisations sidelines with the Muslim side and clamour the narrative of ‘Muslim under danger’. But when Muslim side attacks Hindus, these organisations go to the state of hibernation. Aluva police have lodged cases against the culprits and the Muslim girl’s sister’s Husband Ijaz is arrested in connection with the incident.