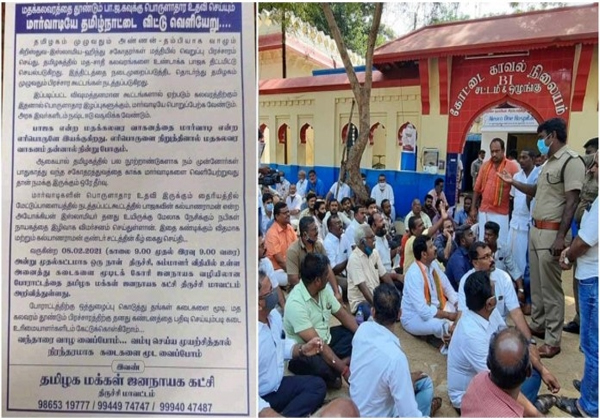 A hardcore jihadi fringe outfit in Tamil Nadu has now given a call to the Marwari community, a powerful business community, to pack their stocks and go back to their home state of Rajasthan. This is a dangerous move to endanger the social fabric and communal harmony of Bharat. It is nothing but an ‘Islamic economic jihad’ waged against the Hindus.

It has been written and said many times that Tamil Nadu has emerged as a safe haven for Muslim fundamentalists, jihadi groups, urban Naxals, evangelical-conversion mafias and anti-national forces. They have the official patronage from the ruling and opposition parties. Their active and open support emboldens them to do whatever they want. It seems these elements have a license to do their anti-national activities, spread canards against the PM and Central government, BJP, Hindu religion in social media and the Tamil Nadu print and visual media who are at their beck and call in exchange for money and favours.

Organizer weekly had in last October exposed diabolical designs of over 180 fringe outfits, letter pad political parties to unleash violence and create anarchy in the state before the polls. It is alleged that they are being funded by DMK. The coming election is a do or die situation for the DMK. If this fringe outfit indulges in activities that could create chaos, law and order deterioration, it will indirectly help the DMK to win the election by fishing in the troubled waters. Stalin’s aim is to make his son at the helm without any opposition during his lifetime. It is a plot to protect both parties and to cling to power.

As part of this grand design, a little known “Tamizhaga Makkal Janayaga Katchi ( Tamil Nadu People’s Democratic Party) has issued handbills asking Marwaris, a powerful business community to leave the state immediately or face serious consequences. The Trichy based TPDP is founded by one KM Sheriff. He was a disciple of Palani baba aka Ahamded Ali. TPDP is known for its Islamic nature. In 2015, the party had hit the headlines for organizing a Beef festival in the state along with other political parties. The fest was organized to condemn the Dadri lynching incident.

TPDP is a registered political party with election commission in 2007. The little known outfit has been issuing pamphlets asking Marwaris to leave the state forthwith. A similar move the Muslims adopted was in Kashmir to throw out the pundits in 80s. The handbill issued by them says “ the Marwaris are extending financial assistance to BJP to foment communal unrest in Tamil Nadu where Hindus, Muslims and Christians have apparently been living as ‘ friends’. Marwaris are the fuel that keeps the BJP vehicle moving. If the fuel is cut, the vehicle will automatically come halt. Any violence and damage to public property will be the responsibility of the Marwari community and the government should collect compensation from them. The Marwaris grab the jobs intended for Tamilians and take away the business opportunities. The Marwaris go back to their native place. We will provide a livelihood to those people who come here. If you do mischief we’ll shut down your shops permanently”.

It also tries to whip up communal conflict by saying BJP leader Kalyanaraman spoke critically of Islam and prophet in Mettupalayam because he has the support and financial backing of the Marwaris. “We appeal to all the shop keepers in Tiruchy Kammalar street in Trichy as a token of protest to shut their shops in solidarity with Muslims in condemning Kalaynaraman’s hate speech on 8th February. Also to voice their opposition to create communal clashes”. The targeted attack against a particular powerful north Indian business community has sent shock waves among the community. Political commentator Bala Gowthaman said “it is nothing new. They have earlier targeted Brahmins and other forward communities. Dravidar Kazhagam, Naam Tamilar Katchi led by ex-film director Seeman, Thirumurugan Gandhi ( Daniel) chief radical outfit May 17 movement have in the past peddled hate against certain communities. Thirumurugan Gandhi had opposed Marwaris dominance and cried for their ouster from Tamil Nadu. in 2013, chief of the Tamil Nadu Self Determination Front (TNSDF) has launched an anti-Marwari drive. He said barely two decades ago, erstwhile Madras Rajasthani was renamed Tamil Nadu and it may well be rechristened again as “marwaristan”. The PMK took Marwaris dominance and wanted them to send to out their native state”.

As a first phase, they have issued leaflets in and around Trichy district. In a counter move, BJP held protests against the TPDP’s worrisome campaign against the peace-loving Marwari community. They demanded the arrest of TPDP functionaries for threatening the community members and advocating violence. The police, instead of arrest the TPDP, detained BJP cadre and Marwari community who held protests. After pressure and a slew of protests, the police has arrested four TPDP members. Last year, during the peak of Anti CAA protest, a man belonging to Marwaris community distributed pens with words ‘we support the Citizenship Amendment Act (CAA) and National Register of Citizens (NRS). A group of more than 100 Muslims threatened to kill him.

Gowthaman pointed out that 15-20 years back, Muslims were running fancy stores, hardware, shoe marts, textile stores. Explaining further he said “They were employees in slaughterhouses and meat shops. They did not own any meat shops. They were into tanning industries. But today they are in all business right from a mobile phone, sim card sales and recharge, driving auto taxis, provisions ( Kirana) and supermarkets, mandis, betal and pan shops in which they have full control. Beef Briyani shops are mostly being run by them. They are mainly responsible for killing more than 136 Hindu Munnani, RSS and other right-wing leaders and workers in Tamil Nadu. After their dominance in business, beef stalls are coming up near temples and in front of the main entrance. In the motherland of Vanchinathan, VO Chidambarnar, Tirupur Kumaran Velu Nachiar and other freedom fighters who fought against the Britishers and Bharat Mata hi jai, Vande Matharam reverberated once, now separate Tamil Nadu state slogan has been gaining momentum. Fundamentalists and separatist forces are active and rearing their monstrous heads. If the terrorism has to go, we have to cut fuel and fund conduits for these anti-national forces.”

“Then we have to freeze the business that is in the hands of Muslims. Muslims fear that Marwaris are competitors in their business and if they are sent out, they will be free to business as they like. In the name of halal certification, they have taken over all the restaurants which enabled them to offer employments to Muslim men. Once the entire business is in their control, it will help them to do conversions and engage in terrorist activities unchecked. In certain areas where they are a majority, Hindus and others are facing a lot of problems and being persecuted. They never respect state laws but sharia laws. I have seen a similar notice in Salem. It is high time Hindus understood the dangers looming around them. They have to compare the prevailing situation with what was during 20 years ago.
Hindus should boycott merchandise run by Muslims and others. Support Hindu businessmen. Muslims generously fund the anti-national and terrorist activities. To stop this, we have to support and do business with Hindu communities. Muslims feel that Marwaris are a stumbling block in their monopoly and they have to be eliminated. Marwaris, being Hindus, can’t be converted to Islam or Christianity. That is the crux of the issue and reason for opposition. The police arrested BJP men who went to complaint against TPDP’s handbill and protest. After H Raja’s intervention police arrested two or three TPDP workers. In Tamil Nadu, today Hindus cannot do business. It reminds me of the situation in 1946-47 in Sindhu province, traders were threatened to leave the business and vacate the area if they wanted to live. They were given 24-hour notice. The same situation is emerging in Tamil Nadu. Hindus should come to streets to oppose this dangerous move. I do not know what police are doing,” he added.

A BJP cadre warned “Today it is against Marwaris, tomorrow it could be against Nadars, another powerful business community. We have to be alert against Islamic Economic jihad. Nadars are their next target as they see they too block their Islamic economic jihad. It is a rehearsal with Marwaris before launching their attack on Nadar dominant community which is united and mighty one. Muslims, it is learnt, keep all their money with Jamaats, which rotate and lend to its members and get interested. They never keep and deposit money in banks. if they do, it is only to get loans”.