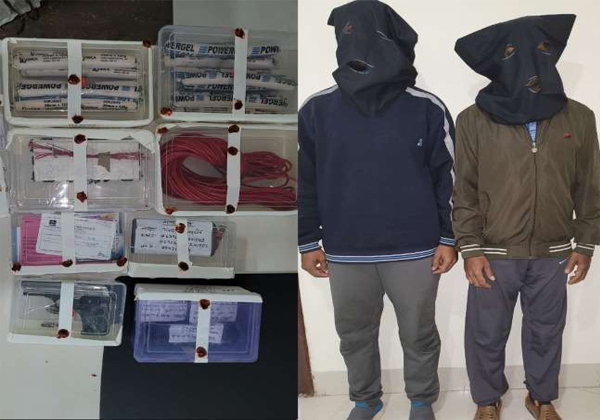 In a major crackdown, UP Special Task Force in a joint operation with central agencies arrested two members of PFI (Popular Front of India) in Lucknow on Tuesday night. As per the media reports, both were coming from Kerala and had plans to execute bomb blasts across Uttar Pradesh.

The arrests were made on Picnic Spot Road on Lucknow outskirts. Powerful improvised explosive devices (IED) were recovered from the possession of the two identified as Anshad Badruddin and Firoz Khan, both natives of Kerala.

“Ansad Badruddin and Firoz Khan have been arrested from Kukrail trisection in Gudamba area,” said Additional Director General of Police (ADG), Law and Order, Prashant Kumar. He added, “Explosive devices including battery and red wire, a .32 bore pistol, seven live cartridges, cash, PAN card, four ATM cards, pen drives, metro card, driving licenses and Aadhar cards were recovered from their possession.” The ADG said, “STF was getting information for the past few days that PFI members were involved in a criminal conspiracy to challenge unity, integrity and harmony of the country and wage a war against the government.” However, the two had confessed to their plan of executing multiple blasts across Lucknow and Uttar Pradesh to mark the ‘Popular Front Day’ – the foundation day of their outfit which falls on February 17.

Moreover, a dozen railway tickets, four ATM cards, two driving licenses, metro rail card, pen drives were also recovered by the STF sleuths. ADG Prashant Kumar, while briefing the media persons about the crackdown, claimed that both Anshad and Firoz, the black belts in martial arts, had confessed to having the task to target at least 20 to 25 RSS leaders within the next few months across India.

While Anshad is identified as the national head of the PFI’s ‘Hit Squad’, Firoz is the national trainer of PFI on making bombs, said the ADG, Law & Order. “We will take both the arrested PFI office bearers in remand and interrogate them further over their plans and also the presence of explosive devices,” he added.

ADG Kumar said that the arrests were made following specific tip-offs about a plan to trigger blasts in different parts of the state. “We got specific leads that the two had reached Lucknow on February 11 and a manhunt was launched. We activated our informers’ network and finally zeroed in on the two on Tuesday,” ADG Law and Order said. He added that the two were also involved in brainwashing gullible youths against the government and then train them in handling weapons and explosives.