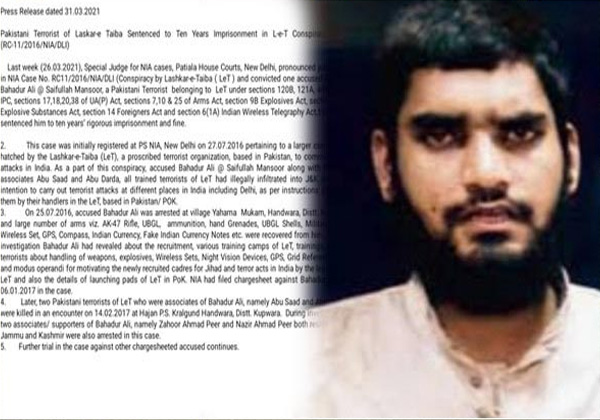 This case was initially registered at PS NIA, New Delhi on 27.07.2016 pertaining to a larger conspiracy hatched by the Lashkar-e-Taiba (LeT), a proscribed terrorist organization, based in Pakistan, to commit terror attacks in India. As a part of this conspiracy, accused Bahadur Ali @ Saifullah Mansoor along with his two associates Abu Saad and Abu Darda, all trained terrorists of LeT had illegally infiltrated into J&K with the intention to carry out terrorist attacks at different places in India including Delhi, as per instructions given to them by their handlers in the LeT, based in Pakistan/ POK.

Later, two Pakistani terrorists of LeT who were associates of Bahadur Ali, namely Abu Saad and Abu Darda were killed in an encounter on 14.02.2017 at Hajan P.S. Kralgund Handwara, Distt. Kupwara. During investigation two associates/ supporters of Bahadur Ali, namely Zahoor Ahmad Peer and Nazir Ahmad Peer both residents of Jammu and Kashmir were also arrested in this case.