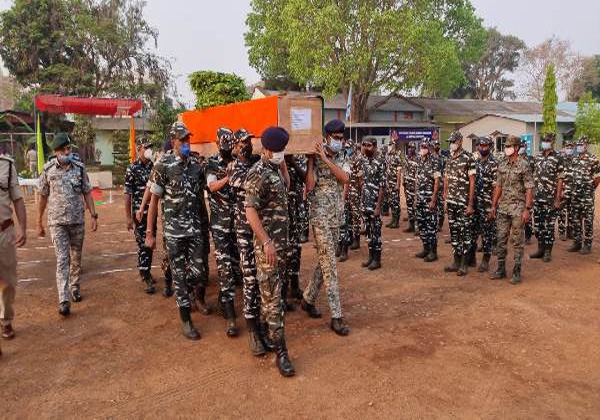 The kilometre-long ambush was reportedly planned in “U” shape near Jonaguda village that ensured security personnel walking into the trap and coming under attack from all corners. The force was moving for a major anti-insurgency operation while acting on a tip off about the presence of hardcore Maoist leader Madvi Hidma in the area.

The operation was planned based on the intelligence inputs and 2000 jawans were involved. The personnel were drawn from Central Reserve Police Force (CRPF)’s elite anti-Maoists CoBRA (Commando Battalion for Resolute Action) units, District Reserve Guard (DRG) and the Special Task Force (STF) of Chhattisgarh police.

As part of the operation launched on Friday evening, parties from five different locations that included Tarrem, Usoor and Pamed (in Bijapur), and Minpa and Narsapuram (in Sukma) moved for the target location. When the patrolling team that was dispatched from Tarrem was advancing through thickly forested area surrounded by small hillocks near Jonaguda, located around 500 km away from the state capital Raipur, it came under heavy fire from the rebels.

The hillocks had facilitated rebels to take strategic positions. The cadres of PLGA (Peoples’ Liberation Guerilla Army) battalion of Maoists were reportedly involved in the operation. The security personnel shattered with the first burst and a few rushed to the adjoining village to take position where rebels laid in wait.

Till Saturday late evening, the officials had confirmed five casualties as the reinforcements could not reach the spot fearing rebels presence. On Sunday morning, the bodies were discovered on the site. In all, 24 jawans laid down their lives in the line of duty. Of them, nine are from CoBRA battalion, eight from DRG, six from STF and one from Bastariya battalion.

About 30 jawans were injured in the incident. Of them, condition of a few was reported to be critical.

While a few bodies were recovered from the village, others were discovered in the forests. The injury marks on the bodies showed rebels had used mortars, light machine guns and grenades.

Union Home Minister Amit Shah said the government would continue its fight against such enemies of peace and progress.

“I bow to the sacrifices of our brave security personnel martyred while fighting Maoists in Chhattisgarh. Nation will never forget their valour. My condolences are with their families. We will continue our fight against these enemies of peace & progress. May the injured recover soon,” he said in a tweet.