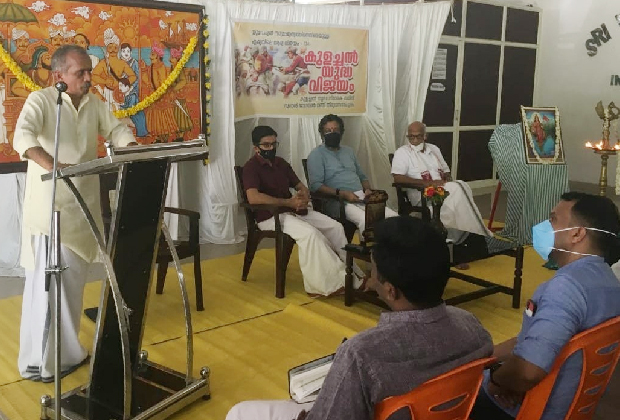 Prajna Pravah All India Convenor J Nandakumar slammed a section of historians for their deliberate attempt to delete Colachel war victory from History. He added that not the defeated war at Plassey, but the victorious war at Colachel should be considered as the real resistance against European colonisation. Some historians have made it their agenda that students should only be taught about our failures and not about victories, he added. J Nandakumar was speaking at the anniversary of Colachel battle victory day organised by Swadeshi Jagaran Manch Kerala.

In 1741, the Travancore Nair Force of Maharaja Marthanda Varma had defeated the expansionist Dutch colonial force in the famous ‘Battle of Colachel’. Thus, becoming the first Asian Kingdom to defeat a European Colonial Power.

Even before the world nations came up with Geneva convention guidelines to treat war prisoners, Travancore gave humane consideration to the Dutch prisoners after their defeat, said Prince Adithya Varma.

Travancore of Bharat: The First Asian Kingdom to Defeat a European Colonial Power

In world history, Japan is credited with the title of the first Asian country winning over a European power. When we look back to our history, rather a western narrative of Indian history, it fills our heart with contempt, inferiority and disdain as glimpses of the timeline of our nation are replete with submissions, defeats and deceits. However, a critical examination of Indian history unfolds hitherto uncared for scrolls of golden epochs, among which ‘Battle of Colachel’ stands out for its greater significance that left an unforgettable mark of pride and bravery in the history but largely faded from collective memory.In the southern strip of Bharat lies a small piece of land, the erstwhile Travancore kingdom, the southern part of present Kerala, that has marvelled us by promising countless ‘First in India’ achievements to our country’s record book.

Marthanda Varma ascended to the throne in 1729 as the king of Venad chiefdom (that later became Travancore), amidst furious internal feuds spearheaded by the powerful ‘Thampis and Ettuveettil Nairs’ (eight prominent Nair aristocratic families that wielded power during that time). Thampis (Sons of previous Maharaja) claimed the throne, challenging the ‘matriarchic system’ followed by Travancore Royal Family. As a result of the prolonged tussle with Ettuveettil Pillais, Marthanda Varma had to flee the palace as a fugitive for a short period. During that time, he survived several murder attempts. Eventually, sometimes with his strategic moves, at other times with brutal iron fists, King Marthanda Varma defeated all Nair aristocrats and power centres that challenged his existence.

Meanwhile, the northern part of Kerala, the Malabar region was almost engulfed by the Dutch colonial forces and was exploring ways to spread its clutches to Kochi and other southern parts to further advance its trade and imperialistic interests. Anticipating the danger, Marthanda Varma annexed neighbouring kingdoms like Elayadathu Swarupam, Kayamkulam that came under the spell of the Dutch, to Venad by means of strategic coercion and battles, and established a new dynasty known as Thiruvitamkoor aka Travancore. The expansionary policy of Marthanda Varma endangered the Dutch East India Company’s trade interests in the region since they feared that the British, who had already signed a treaty with Marthanda Varma, would gain the rights to the pepper trade in the Malabar coast.

As a response, Dutch Governor of Ceylon Gustaaf Willem van Imhoff wrote to Marthanda Varma demanding that he should end the aggression against Kayamkulam. Marthanda Varma wrote back to Van Imhoff, ordering him not to interfere in affairs of Travancore that did not concern the Dutch. In a subsequent meeting, Imhoff demanded that Marthanda Varma restore the annexed Kayamkulam to its former ruling princess, else he would be attacked. Marthanda Varma snubbed it with a witty comment, “Well, I was considering an invasion of Europe”!

Following the meeting, Dutch marines from Ceylon led by Captain Eustachius De Lannoy landed with artillery in Colachel to attack Travancore. The Dutch captured the territory up to Padmanabhapuram and laid siege to the Kalkulam (Padmanabhapuram) fort. Marthanda Varma and his Prime Minister Ramayyan Dalwa, who had been camping in Trivandrum, promptly marched south with the infantry, cavalry and artillery of the Nair force and prevented the capture of Kalkulam fort by the Dutch. Succumbing to the massive counter-attacks launched by the Travancore force, the Dutch were forced to retreat to their defensive positions in Kulachal.