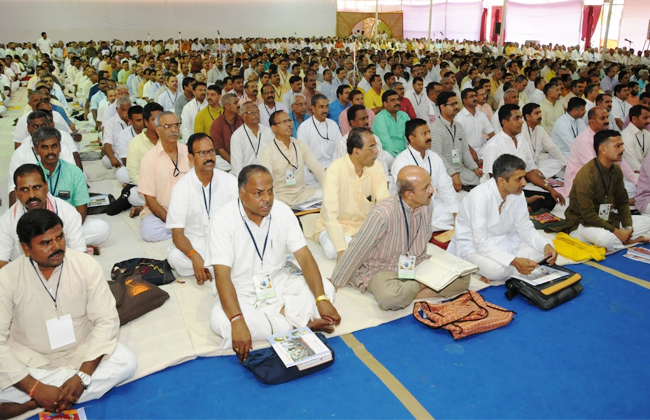 The Akhil Bharatiya Pratinidhi Sabha (ABPS) expresses grave concern over the unabated rise in violence by Jehadi elements in West Bengal, encouragement to the anti-national elements by the state government due to its Muslim vote bank politics and declining Hindu population in the state.

The attack and looting of the Kaliyachak Police Station (District Malda) which is just 8 Km inside the Bangladesh border, burning down of the crime record by the anti-national Jehadi elements and growing incidents of attack on security forces in the state are posing a serious challenge to national security and law and order. Fatwas inciting violence are openly being issued by fundamentalist Maulavis. Hindus are being attacked by fundamentalist elements at several places including Katwa, Kaligram, Ilambazar and Metiaburuj (Kolkata). Large number of Hindus are being forced to flee from the border areas under the pressure of fundamentalist forces. Smuggling of fake currency and cow progeny along with illegal migration are being perpetually encouraged by these very elements. During the investigation of Burdwan bomb blasts, the National Investigation Agency (NIA) has found that several terror modules exist across the state and this network of Jehadi extremists is spread on both sides of the border.

Just when extremists, fomenting trouble in a planned manner, are being encouraged by giving ministerial berths and other prominent political and government positions, at the same time the State Government is creating obstacles in celebrating religious activities of the Hindu society. Sometime back, timings for the immersion of Maa Durga idols were unusually curtailed because of Muharram for which the State Government attracted strictures from the Kolkata High Court.

Several incidents of bomb blasts, arson, violence and molestation of women have been reported in the past few years. The worst sufferers of these atrocities on the Hindu society, have been the members of the Scheduled Castes. 6 persons from these communities were killed at Juranpur, Vaishnavnagar, Kharagpur and Mallarpur and during the last year’s Durga Puja, a 17 year old girl student from the same community was attacked with acid bulbs, who later succumbed to the injuries. At Dhulagadh, on 13-14 December 2016, Hindus were subjected to a preplanned attack resulting in horrid incidents of arson, looting and molestation of womenfolk. Instead of controlling the extremist elements, the State Government attempted to completely hide these incidents. It is shocking that cases were foisted against some impartial journalists who courageously brought the above heinous incidents to light.

While on one hand the State Government is threatening to close down the schools which are instilling the spirit of patriotism, on the other hand it is turning a blind eye towards thousands of institutions like the notorious Simulia madarsa where Jehadi and fundamentalist training is being imparted. Original Bangla words in the text books are being distorted under the influence of fundamentalist elements. At several places efforts are being made to stop the traditional Saraswati Puja in the educational institutions. The State Government is overlooking the attempts to islamise the schools like the pretext of observing Milad-Un-Nabi.

Last year, when the school administration refused the permission to observe Milad-un-Nabi, extremists took control of a 1750 students-strong higher secondary school at Tehatta, just 40 Km away from Kolkata, hoisted their flag and locked the lady teachers in a room. As a consequence, the school remained closed for a month.

At the time of partition, Hindu majority area of Bengal came into existence as West Bengal. Thereafter, due to the continuous persecution and atrocities in East Pakistan, present Bangladesh, large number of Hindus were forced to seek refuge in West Bengal. It is surprising that despite the large influx of Hindus displaced from Bangladesh to West Bengal, Hindu population of the state which constituted 78.45 % in 1951 has declined to 70.54% as per census of 2011. This is a matter of serious concern to the unity and integrity of the country.