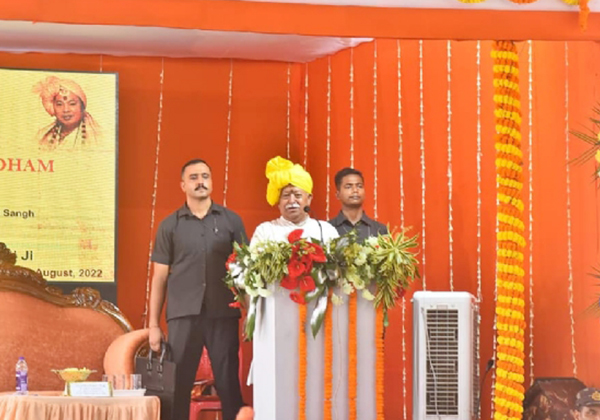 Agartala: Rashtriya Swayamsevak Sangh (RSS) Sarsanghchalak (chief) Mohan Bhagwat on Saturday urged all followers of “sanathan dharm” to protect their religion and, if necessary, give up one’s life to save it.

He was addressing a gathering during the inaugural programme of Santikali Mandir at Shorbong village under Amarpur subdivision in Gomati district, which is some 110 km from Tripura’s capital, Agartala, and on the occasion of the 22nd death anniversary of Santikali Maharaj, a popular Hindu priest, who was brutally murdered by armed militants of the banned militants of the National Liberation Front of Tripura in his “ashram” near Jirania’s Khumlwng area.

The RSS supremo said, “In India there are various food habits, languages, cultures, and traditions, but despite all these differences, all share a sense of kinship and oneness-Indianness in thoughts and due to the sanata dharma.”

He went on to say that this kinship is not limited to India’s geographical area, but rather, according to its philosophy, the entire globe is ours, and thus there is no record in history of sanatan dharma being forcefully spread by converting or India attempting to occupy any nation, as modern-day imperialist nations such as America, Russia, or China do.

Bhagwat stated that communities such as the Huns, Muslims, or, for that matter, the Christian British who invaded India with the intent of looting did not share this kinship in their religion or culture, and thus attempted to convert or even eliminate people because they believed anyone with a different idea of gods, cultures, or language were ‘others.’

Advocating the idea of ‘universal brotherhood and oneness’ that Sanatan Dharma preaches, Bhagwat said it preludes the welfare of not only the humanities but also biodiversity, while seeing each other as separate identities leads to exploitation, wars, injustice, and destruction of nature.

Sighing the example of Santikali, who, despite threats from the militants, did not change his religion or work place till the last drop of blood in his body, the RSS chief said, “Santikali Maharaj, following the preaching of the Gita, sacrificed his life for his religion, knowing well the consequences much earlier as militants had threatened him. We should follow him, live for the Dharma, and if required, die and sacrifice our lives for the protection of our Dharma”.

Bhagwat viewed that India gave the world the sense of “spirituality” and that temples play a vital role in making lives pure, peaceful and spreading happiness.

Bhagwat a day ago arrived in Tripura and went to the palace of the erstwhile Manikya royals and met Rajmata Bibhu Kumari Devi in the presence of royal scion Pradyot Kishore Manikya Debbarma, supremo of the TIPRA Motha party, which at present is in power in the Tripura Tribal Areas Autonomous District Council (TTAADC).

His visit raised speculations regarding talks related to a political alliance between the BJP and the TIPRA Motha before the coming village committee and assembly polls, both to take place in the next six-month time period.

However, both the RSS and the royal family denied any political talks and viewed Bhagwat’s courtesy visit as a chance to meet the Rajmata and see the royal Manikya dynasty’s royal throne and a Chandi temple in the palace.