by VSK Kerala Desk
in Uncategorized 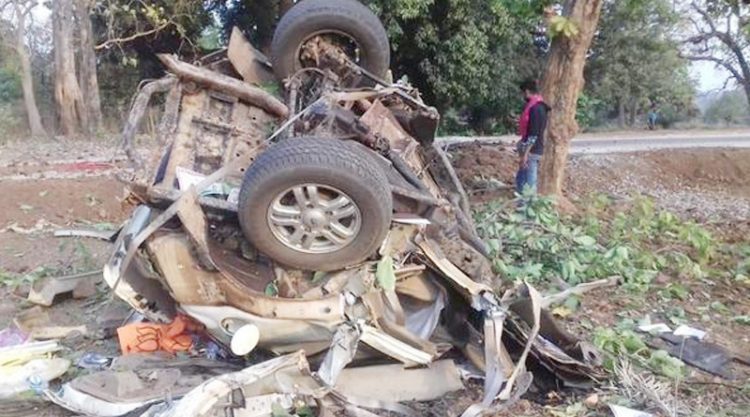 ShareTweetSendTelegram
On last day of campaigning, a convoy of BJP leaders was attacked by Communist terrorists in Chhattisgarh’s Dantewada on Tuesday evening. BJP MLA Bheema Mandavi and four others were killed in the attack.
The convoy was heading towards Kuwakonda from Bacheli area, which is about 450 km from Raipur when the red terrorists bombed a vehicle in the convoy and opened fire at other vehicles. BJP MLA Bheema Mandavi was returning from campaigning when the escort vehicle of the state police was targetted with the IED. Dantewada falls in the Bastar Lok Sabha seat which will go to polls in the first phase on April 11.
P Sundar Raj, DIG, Naxal operations, said that the MLA’s vehicle came in the ambit of the IED blast that left a huge crater on the site of the attack. Security forces have been rushed to the area. Special DG (Anti-Naxal Ops) DM Awasthi said Bachheli PS Incharge had informed the BJP MLA that adequate security was not present on the route near Kuakonda and that he should not go there. An Improvised Explosive Device (IED) was reportedly used by the Naxals in the attack that took place between Kuakonta and Shyamgiri hills.
Chhattisgarh Chief Minister Bhupesh Baghel has called a high-level meeting in Raipur.
Condemning the attack, Prime Minister Narendra Modi said sacrifices of those killed will not go in vain. “Strongly condemn the Maoist attack in Chhattisgarh. My tributes to the security personnel who were martyred. The sacrifices of these martyrs will not go in vain,” he said.
Paying condolences to the family of Mandavi, Shri Modi said he “was a dedicated Karyakarta of the BJP. Diligent and courageous, he assiduously served the people of Chhattisgarh.”
Chief Minister Bhupesh Baghel said the Congress party understands the grief of people as it had also been the victim and had lost a “generation of their leaders in a Naxal attack.”
ShareTweetSendShareShare