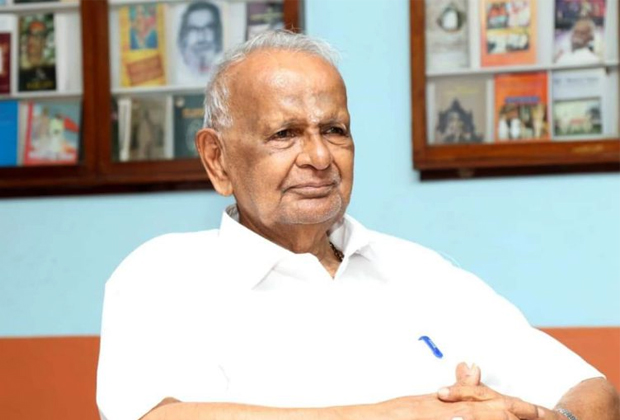 Veteran R.S.S. Pracharak R. Venugopal passed away on Wednesday at his residence. He was 96. He had served as former national working president of BMS and chief editor of Kesari.

Venugopal was also a leader who represented India twice at International Labour Organisation. His mortal remains will be kept till 12 pm at state’s headquarters Madhavanivas for public display to pay last respects.

He belongs to Nilambur Royal family and had  give up all his material possesions and dedicated his  life to become sangh pracharak, leading  a saintly life. He was born in 1925 as the son of Kochunni Thampuran and Nannikutty Amma of Palakkad. He completed his studies from Victoria College, Palakkad and Banaras Hindu University. After his higher studies, he decided to wark as Pracharak of RSS in 1946.

The friendship with Dattopant Thengadi moulded Venugopal into a prominent worker of the RSS.

He was instrumental in making Bharatiya Mazdoor Sangh, the largest labour organisation in the world. He represented twice as a representative of labour movements at Geneva. Venugopal was noted for having a good personal relationship with all the trade union leaders. he  was instrumental in the  growth of Several Sangh organisation like BMS, Sahakar Bharathi and Kesari Magazine

Venugopal was the first non-communist labour leader to visit China.