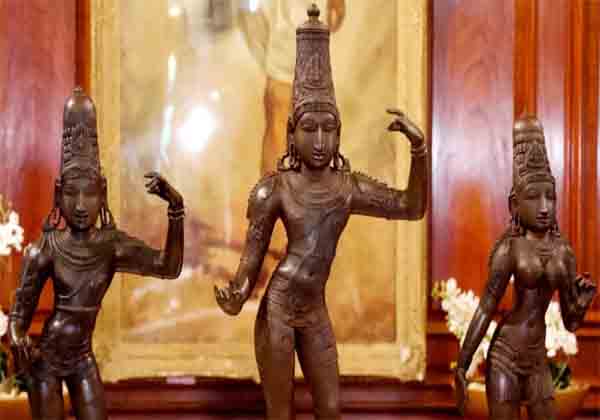 New Delhi. UK police on Sep 15, Tuesday, ancient idols of Lord Ram, Lakshman and Sita handed over to India that were stolen from Tamil Nadu 40 years ago, as part of growing efforts to return artefacts of India’s cultural heritage from across the world.

The theft dates back to 1978 and led to an investigation by the Idol Wing of the Tamil Nadu Police working along with colleagues in the Metropolitan Police in London.

They belong to a 15th Century temple built during the Vijayanagara empire, located in Anandamangalam village in Tamil Nadu state, and were stolen in 1978. Vijayanagara was once one of the most important trading centres in the world.

It is said that a photograph of one of the sculptures was spotted on the website of the British Antique Dealers’ Association by a member of India Pride Project, which works to bring stolen idols back to India.

After matching them up with archival photographs from the 1950s held at the French School in Pondicherry, it was proved that the idols in his possession were those belonging to the Vijayanagara period.

The group then approached the High Commission of India in the UK. Police officials found a complaint registered on 24 November 1978, showed that the theft had taken place the night before.

Three men were also arrested in this regard and they had claimed to have sold the idols to people he did not know.

Later, they contacted the dealer who had advertised the sculpture and he voluntarily offered to return it. He also had two other idols from the same set.

The handover was delayed due to the pandemic but it finally happened on September 15. However, as reported by BBC, the set is still incomplete as there is a fourth idol of Lord Hanuman and is suspected to be in a museum in Singapore.

Also, if the idols had been sold, they might have fetched millions of dollars.