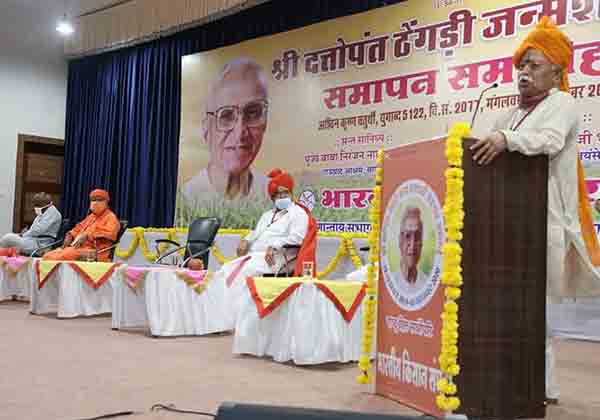 RSS Sarsanghchalak Shri Mohan Bhagwat on Tuesday said the entire world is adopting the basic element of Indian ways of life for its growth and sustenance amid the corona pandemic.

He said 50 years ago, a scheme of organic manure was dumped by the Centre because it was developed by indigenous brains but there is no alternative before the world today.

“The entire world is returning to the basic elements of Indian thought process to practice developmental ways while being environment friendly after being battered by coronavirus during the last six months,” said Shri Mohan Bhagwat at an event in Kota.

He was addressing a function on the 100th birth anniversary of Bharatiya Mazdoor Sangh founder and thinker Dattopant Thengadi.

Hailing Thengadi’s foresight and his works, the Sarsanghchalak said the agriculture was never a subject of trade in India but the world sees it as agriculture economics.

“We have seen this as a means of worshipping Goddess Lakshmi, the goddess of glory, not as a means of conducting trade,” he said.

Shri Mohan Bhagwat said agriculture’s economics aspect is not bad but people fail to see that a section of people seeks to exploit others for the business. He said Thengadi’s birth anniversary celebration is for showing gratitude to the work done by him. He said there is a need to create an agriculture that nourishes the whole world.

“We have to adopt ideal agricultural practices based on experience and proven evidence. India has ten thousand years of agricultural experience, so it is not necessary to take anti-environment practices from the West,” the Sarsanghchalak said.