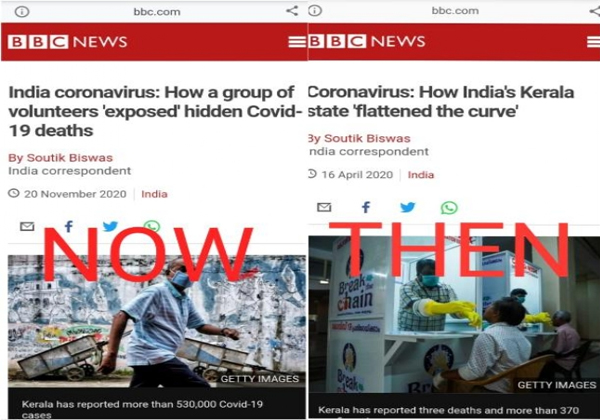 Kerala government and its health minister KK Shailaja drew much appreciation from certain global media outlets which highlighted the government’s effectiveness in ‘successfully controlling’ the COVID-19 pandemic. The government was hailed for providing transparent data on COVID infected and death rates. But now a group of volunteers headed by Dr Arun S Madhavan has called off such bluffs. What they found is gross under-reporting of COVID deaths by the Kerala government to save its face which they promoted during the initial days of COVID-19 outbreak.

Dr Madhavan, a general physician by profession, along with his team observed all the editions of 7 Malayalam newspapers and followed five local news channels to list each and every death caused by COVID-19. They have found that there had been 3,356 deaths due to COVID-19 infections, while the government database just shows 1,969 deaths. He also claims that three people with COVID-19 symptoms had visited him at his clinic, but later turned COVID-19 positive and died in hospital. Their death news didn’t come in media or was reported by the state.

On his latest article published in BBC blog, Soutik Biswas quoted Oomen C Kurien of the Observer Research Foundation, as he says that the undercounting of deaths in Kerala has been “conscious and systematic, and not because of systemic weakness”. He further added that “The authorities seem to be convinced that by whatever means the state should keep its reputation as a Covid-19 success story”. Another senior government official, on the condition of anonymity, had told Soutik that the state underreported COIVD-19 related deaths by 30%.

Soutik Biswas had earlier fallen prey to the propaganda of Kerala government. On the same BBC platform, he had published an article in April praising the prompt response of the state government while dealing with the COVID crisis. He had also praised the public health infrastructure of Kerala, calling it the biggest reason for Kerala to ‘flatten its COVID curve’. Like him, many authors of international reputation were made to believe in what the ruling dispensation calls the ‘Kerala model’, inflated with lies and propaganda.

The state government is currently testing 60,000 samples per day and the COVID positive rate is around 6,000 a day. Local body elections are due to happen in a few weeks and therefore Kerala government won’t prefer to disclose the exact number of deaths to the public. Hence, the cover-up will continue, the ‘transparent government’ of Kerala is all set to fool its people with more bogus COVID-19 data.