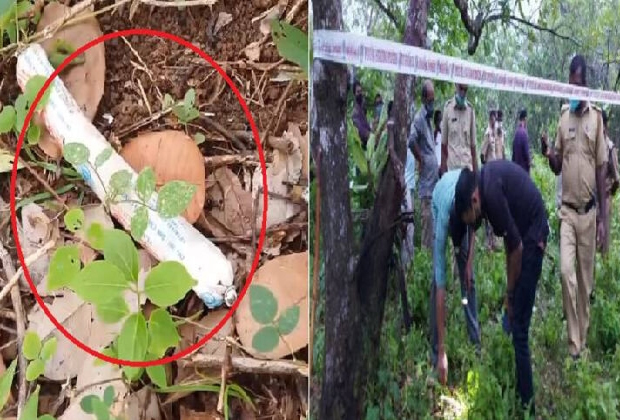 Kollam : During a search, operation conducted, Kerala Forest department today in the cashew plantations coming under the Forest Development Corporation at Padam, Pathanapuram, Kollam, explosive substances viz. Gelatin sticks-2, Detonators-4, battery, wires, guns etc were recovered.. The police have confirmed the terrorist angle to the incident, and an NIA team will reach the spot today for investigation. The investigative agency had received a thread while questioning a Kerala-born terrorist capture in Uttar Pradesh about the terror camps in Pathanapuram. Before two months, the Tamil Nadu police intelligence department investigated the region after receiving a tip.

The investigating agencies have taken a serious note of this recovery as intelligence reports mentioned about the Islamist outfit Popular Front of India’s operating secret training camp in the area. The Kerala Police’s ability to detect terrorists’ presence in the state has been a source of severe concern.

Later, the Bomb squad arrived at the place and further search operations took place. The investigating agencies had received information from an Islamic terrorist caught in Uttar Pradesh, of more than 200 Muslim fundamentalists received arms training from this area. Since the specific area has dense forests, it’s a safe haven for terrorists. There have also been incidences in Kerala where Islamic terrorist organizations were involved in weaponry training and terror recruitment.

Earlier also, PFI had been involved in various terror-related activities, conversion racket and black money transactions. As per the latest reports, PFI terrorists were plotting to murder the RSS-BJP leaders of Southern Kerala.