Emulate the Mahatma’s vision in our lives – Dr. Mohan Bhagwat 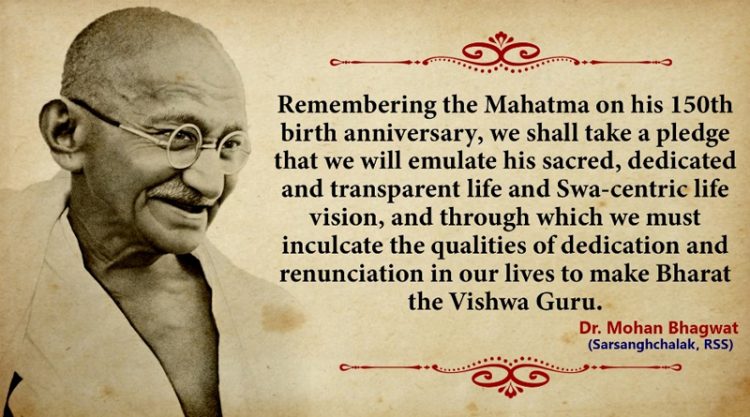 ShareTweetSendTelegram
Poojya Mahatma Gandhi is prominent among luminaries whose names were etched in the history of modern and the rising Independent Bharat, a glorious chapter in its eternal and epochal journey. Bharat is the land of spirituality, and its progress is rested on the same. Mahatma Gandhi laid the foundation and built a polity based on this.
Gandhiji’s efforts were not limited to power politics. His focus was more on creating righteous behaviour (Satwika Acharan) in society and its leadership. Mahatma Gandhi outrightly discarded the egoistic and corrupt global and domestic politics driven by selfish pursuits. It was his dream for the country and humanity that public life should be based on truth, non-violence, self-reliance, and real freedom. Gandhiji realised this vision in his life.
Following the arrest of Gandhiji, Congress organised a rally in Nagpur in 1922. Addressing the rally, Dr Hedgewar said that there was no disparity between his words and deeds, terming him as a sacred soul (Punya Purush) and added Gandhiji was a man who was always ready to sacrifice everything for principles and ideals. Doctorji said that mere verbal glorification of Gandhiji would not take his mission forward. Emulating the Gandhian values in our lives is the only forward to further the vision of the Mahatma.
Gandhiji was well aware of the detrimental impact of the slavish mentality, which was born out of dependency. In his Hind Swaraj, he envisioned a dream picture of Bharat’s progress and performance based on the pure Swadeshi vision, which was free from this slave mindset. At that time, the victorious West had dominated the entire world with its dazzling materialism and tried to promote its systems and lifestyle through distorting the education and making others financially dependent through political power. In such a situation, Gandhiji’s endeavor to give a new thought based on our own identity to all spheres of human life was a successful experiment. However, without understanding this, the people with a slavish mindset accepted the western set of values as a model, denouncing our forefathers, pride, and culture as inferior and disgraceful and engaged themselves in imitating and flattering the West. Its massive influence is visible in the country’s direction and condition even today.
Drawing ideas from Gandhiji’s Bharat-centric thoughts, many contemporary world leaders had contributed to their nations’ thought process. On Gandhiji’s demise, Albert Einstein said: “Generations to come, it may well be, will scarce believe that such a man as this one ever in flesh and blood walked upon this Earth.” Gandhiji had placed his life before us as an example through his pure conduct and thought.
Gandhiji visited a Sangh camp held near Wardha in 1936. The next day, Dr Hedgewar met him at his Ashram. The contents of the long question-answer session and discussion are now in the public domain. Gandhiji also visited a shakha near to his place of residence in Delhi during the tragic days of Partition. He spoke to the swayamsevaks in the shakha. Its report was published in the Harijan, dated September 27, 1947. Gandhiji expressed his joy over the discipline of the Sangh swayamsevaks and the complete absence of the divisive feelings of caste and creed in them.
Gandhiji, who believed in the Swa-based reorganisation of Bharat, firmly stood for social equality and harmony and translated his vision into action, had set an example for all through his life. We must perceive, understand and manifest it in our life. On account of this, even those who had minor differences of opinion with him also viewed with reverence.
Every morning, right from its very inception, the Rashtriya Swayamsevak Sangh remembers the great personalities of our nation through a practice of reciting a stotra. In 1963, this stotra was revised by adding some new names. By the time, Poojya Gandhiji was no more and his name was also added. Now, it is known as Ekatmata Stotra. The Sangh swayamsevaks recite it every morning and recall Gandhiji’s life of the above-mentioned values.
Remembering the Mahatma on his 150th birth anniversary, we shall take a pledge that we will emulate his sacred, dedicated and transparent life and Swa-centric life vision, and through which we must inculcate the qualities of dedication and renunciation in our lives to make Bharat the Vishwa Guru.
Tags: #mahatma_gandhi#sarsangachalak
ShareTweetSendShareShare