by Asha Lawrence
in Articles 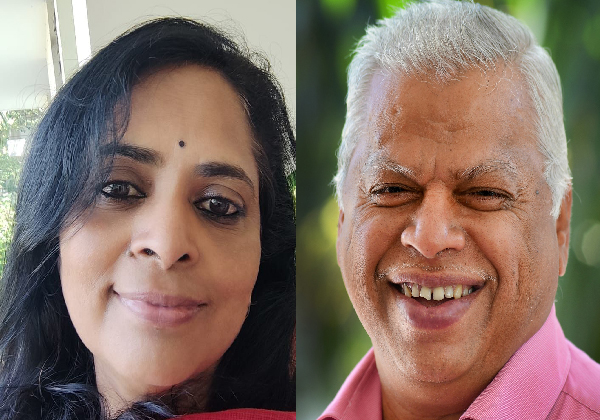 Asha Lawrence was a contract employee of SIDCO a state government owned institution and she was harassed mentally from the party colleagues and co-workers and forced to resign from the job. It was due to the incident that her son Milan visited a protest meeting place of BJP on the issue of the controversial Sabarimala temple entry. And the other charge was that she wrote an article in Kesari weekly run by RSS trust in Kerala. Professionally she is a qualified textile designer and at present hunting for a job to survive. Though she is the daughter of a senior comrade who is alive Communist party shows no mercy to her.

It is a shocking blow to the communists and communist Party (Marxist) of India. She, Asha Lawrence, the daughter of M.M. Lawrence, the octogenarian leader, former all India left wing trade union CITU national leader and ex MP (Rajya Sabha), responded to the statement of Mr. M V Jayarajan, CPI(M) leader from Kannur, Kerala and former secretary to Chief Minister Pinarayi Vijayan recently on Facebook. She exposes the stand and approach of CPI(M) towards the Dalit community and quoting examples and incidents categorically. Her stand and statement put the communists in an awkward situation.

She writes —(Full text of her FB page)

This may surprise you but let me tell you this hard truth “CPIM is the most casteist & hegemonic political organisation in the world”.

Political murders are still prevalent in the CPIM ruled Kerala, last week a CPIM worker Haridas a fisherman was killed in Kannur the epicenter of political murders in Kerala, CPIM Kannur district Secretary and right hand man of CM Pinarayi Vijayan,  MV Jayarajan alleged that RSS was behind the murder and the Sangh Parivar was targeting CPIM for supporting communal harmony also adding that how Sangh Parivar lauds caste supremacy , MV Jayarajan had alleged that the murder of Haridas, who was a fisherman, showed the hegemony of the RSS and its dislike towards the fisherfolk and low castes, the usual song of left organizations.
While MV Jayarajan was stating the same unfortunately he failed to recall the fact that how his own veteran leader the former CM of Kerala & former leader of Opposition  Com VS  Achuthandan  had humiliatedSri TJ Anjalose (Ex MP who was expelled from CPIM , present District Secretary of CPI ) by addressing him as a “fisher boy” “The poor fisher boy forgot that it was the party that gave him everything in his life ” this very statement of VS Achuthandan exposes the casteism of CPIM,  Mr Anjilose hails from fishermen community, Latin Catholic and was considered a ‘sure candidate’.
Recently Mr K Sudhakaran MP KPCC President addressed Mr Pinarayi Vijayan CM as “Chethukarante makan” literally means “toddy tapper’s son” had become controversial enough . The Congress state president was criticising CM Pinarayi Vijayan’s ultra luxurious lifestyle and referred him as the first CM from a working class to use a helicopter even though it was frowned upon but CM Pinarayi himself said nothing wrong in that and wasn’t offended with K Sudhakaran’s statement.

I several times have heard from comrades themselves badmouthing against their co-comrade on basis of their caste, saying “he belongs  that low community right ? What more to expect from him, he can behave like that only”
|| Chethukaran (toddy tapper) Beedi thozhilali (Beedi worker) , Mukkuvan ( fisherman) ,  Thayyal thozhilali (Tailor) are some common terms used to address !
They always says Thayal thozhilali  on Comrade VS Achuthandan In Childhood Comrade VS was a helper in his brother’s  tailoring shop. ||

When I was working in Delhi,  one Mrs Jayasree W/o Mr V B Parameswaran, the then  Delhi  Bureau Chief of Deshabhimani ( mouthpiece of CPIM) used to say they are “Namboodiris”(Kerala Brahmins) .She herself is a CPIM comrade that time & was working in Kairali channel , whenever she would meet me absolutely for no reason unnecessarily would say ” Asha, we are Namboodiris “.
Deshabhimani the party mouthpiece while publishing write ups on top leaders of CPIM will introduce their as He belongs to a renowned family he is brahmin , very well of family  ….  I wonder how come communists are so keen in castes ,Why should communists even bother about one’s caste or family , shouldn’t the CPIM be engaged in establishing a societal system that is free from the tyranny of the caste system rather than behaving a casteist manner  ?    Right from P Sundarayya to EMS Namboodiripad to Harkishan Singh Surjeet & Prakash Karat to Sitaram Yechury never ever since last 57 years has been a Politburo member who belongs to Dalit community.

When I was small child maybe at the age of 7 or 8  I would ask  my father what does Communism and socialism mean ,  He would explain it in a simple but powerful words, that both means ‘EQUALITY ‘. Then I again asked what  is ‘equality ‘ how come every humans hold an equal status? He said “all humans are equal irrespective of their caste, creed , skin colour , wealth , status, everyone is equal.  The young me actually believed in that, I thought that there’s equality in communist countries .
While I was in college (St Teresa’s womens college Ernakulam) once during our History lecture our Professor asked the meaning of ‘Socialism’ to the whole class, none of the  students answered and when my turn came and I stood up confidently and said the exact things my father told “Equality for all in society, Equal income equal power ”  Professor Ms Any Chacko said  if I despite being a Communist leader’s daughter hadn’t answered she would have definitely called and bought my father to college!!

Eventually I learned that there is no such thing called “Equality” it was just eloquent words in texts, there’s no “Equality ” in Communist Countries moreover even in My father’s party CPIM as well. I don’t think that My father as a disciplined cadre of the party would never admit the discrimination and isolation certain comrades including my father has faced from the Communist Party we children and our mother knew this very well.

Now my father MM Lawrence is 92 years old in early 1950’s  CPIM had very few countable Christians & Muslims comrades as full time workers like Com EK Imbachi Bava. Nowadays when the very CPIM leaders & leftists address BJP as a hindu party should also know that once CPIM was also known as a hindu party in Kerala, majority of party members and sympathisers belonged to  Ezhava community ,  now the scenario has changed in CPIM and there are more christian, muslim members in the party.

In front of the whole world CPIM claims that they are the one and only political party for taking stance for the poor working class ,gone are those days now the Communist Party itself is a Party for the Bourgeoisie  and almost all the CPIM leaders lead a luxurious life style in every means, results of smuggling gold perhaps & if anyone questions this drastic change in lifestyle they will say for this change of life style they protested against capitalists.  Result is there is no difference between communists, and capitalists .

All most all political murders are pre planned and well strategized. Leaders know about all the upcoming political murders only the party workers and sympathisers wouldn’t know about this hidden agenda, a scapegoat wouldn’t never know .  In each political murder CPIM will be either the culprit or the victim.
Recently here in Kizhakkambalam a, rural area  in Ernakulam district  one Mr CK Deepu was killed, he was an activist of the Twenty20   somehow the above mentioned Mr Deepu  killed  by CPIM workers. And this Deepu belong to Scheduled Caste.   So when Mr Haridas is killed CPIM alleges that RSS is behind the murder because RSS is against low caste communities and that person belonged to a low caste whereas Here in Deepu’s murder CPIM leaders are turning a blind eye and have no such comments ,  How can they? . Deepu a SC man and CPIM workers under arrest for the murder. Is CPIM against SC community is that why the poor man was killed  ?

CPIM  wants ‘martyrs’, CPIM is a party that rose to power on the blood of martyrsWhen their workers get killed life they say  When they became the culprit then also they used to say they the culprits also martyers .

One family one martyr that’s the party policy after a party worker gets killed ,they would adopt the victim’s family help them build new house, financial support for education, wedding, career and what not the party would also bear the costs for legal aid also arrange top lawyers who are leftists.
The CPIM has the sole responsibility of political violence in Kerala , ” Nor leaders nor their children loose their life its just  the ordinary workers whose life is at stake and suffers, and of course those who speak up against them also get killed this nasty mentality is called “Communism”.