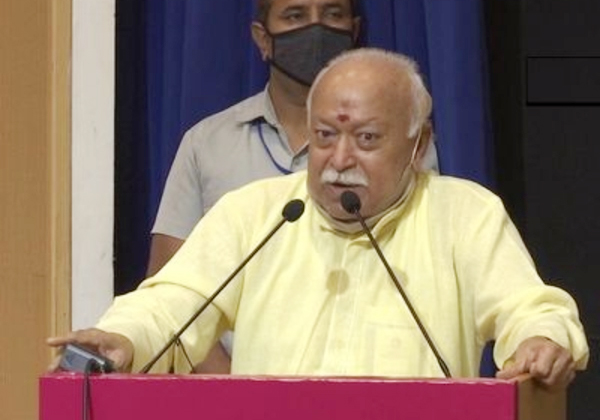 Veer Savarkar was a nationalist and rationalist to the core, but a section has made a concerted effort since Independence to defame him, said Sarsanghchalak Dr. Mohan Bhagwat on Tuesday (October 12) in Delhi.

Since his school days, Veer Savarkar had decided to devote his life to the service of the motherland, and he never looked back, he added.

Sarsanghchalak was speaking in Delhi at the launch of the book “Veer Savarkar: The Man Who Could Have Prevented Partition by Uday Mahurkar and Chirayu Pandit”, published by Rupa Publications.

Speaking about the ideas of Veer Savarkar, Sarsanghchalak said Veer Savarkar did not use the term “Hindutva” for any religion, but it represented the cultural and civilisational identity of India.

He added, “It is fashionable to talk about Swami Vivekananda’s Hindutva, Swami Dayanand Saraswati’s Hindutva etc but there is just one Hindutva and that is Sanatan.”

Speaking at the same event, the Union Defence Minister Rajnath Singh said people of a particular ideology have had made multiple attempts to defame Veer Savarkar, and many lies were spread about him, but the truth about Veer Savarkar is emerging.

Rajnath Singh said Veer Savarkar’s views about government were there should be no discrimination based on religious or cultural identity.

Sarsanghchalak said Veer Savarkar believed in the wellbeing of all and the appeasement of none.

Veer Savarkar was a very practical person and advocated that the wellbeing of the country should be the foundation of our foreign policy.

Rajnath Singh said, “Veer Savarkar advocated that our national interest should be the core of our foreign policy. Any country should be considered friend only if it was helping in achieving our national goals.”

He also said that after the country got Independence, intellectuals of a certain ideology spread canards about him, saying he was a weak person and begged for mercy from Britishers.

Defence Minister Rajnath Singh said, “Veer Savarkar was sentenced to life imprisonment twice. And he filed for a routine mercy petition on the advice of Mahatma Gandhi. But, some people never stopped spreading canards about him.”

He was a social reformer, too, as he strongly advocated for women’s empowerment and opposed discrimination based on caste and gender. He campaigned for entry of all in the temples.

Sarsanghchalak also said that those defaming Veer Savarkar wouldn’t stop at him, and their next target would be Swami Vivekanand, Swami Dayanand Saraswati and Yogi Arvind, as Veer Savarkar drew his ideological inspiration from them.