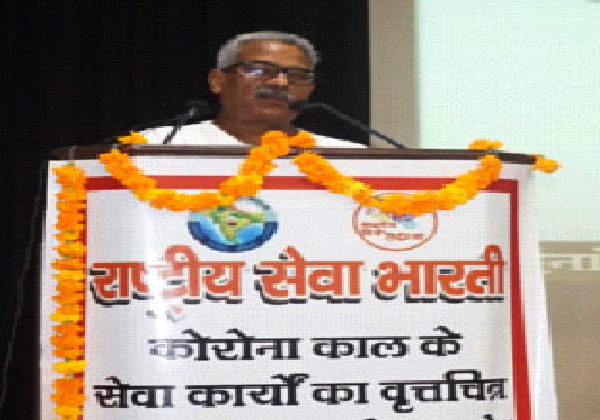 Saha Sarkaryavah of Rashtriya Swayamsevak Sangh  Dr Krishna Gopal has said that the sentiment that Bharat expressed during  the pandemic period was not seen anywhere else in the world. during the Corona period, every social and religious organisation of the country did service according to its capability. Service has been an integral part of philosophy and Sanatan Sanskar for thousands of years. Indian society progresses only with the capital of this spirituality. There is a lack of capital in the form of compassion and  co-operation in the Western world. That is the fundamental difference.”

Further, he added, “We also stood up from the horrors of Corona because people here take pleasure in serving others. It is also our responsibility to make the world aware. Today the world is witnessing how India has conquered the tragedy of Corona on the basis of the collective power of society.”

To deal with the unexpected crisis of Corona, National Service Bharti conducted various types of service work in the country. This service work should awaken the spirit of inspiration in the conscience of society. Consequently, a coffee table book title “Vayam Rashtrangbhuta”, a book titled “Service story of sensitive India in Corona period” and a documentary “Saundary Din Seva Ke” have been made. On August 17, these special compilations were released and broadcast in the august presence of Dr. Krishna Gopalji, Saha Sarkaryavah of Rashtriya Swayamsevak Sangh at NDMC Convention Center in New Delhi.

Edited by Shri Prashant Pol, the introduction of the book “Sensitive India’s service story in the Corona period” has been written by Shri Suresh (Bhaiyaji) Joshiji, former Sarkaryavah of RSS. Through the introduction, he has described the compilation as a page in the history of an unimaginable period. Similarly, in the foreword of “Vayam Rashtrangbhuta”, Shri Bhaiyaji said that after seeing and reading this compilation, everyone would get new inspiration and energy for social service.