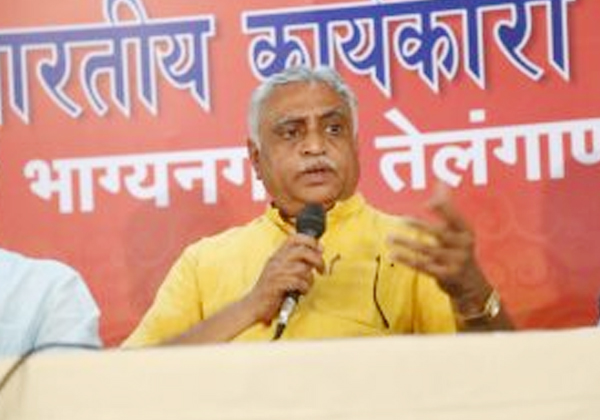 The Akhil Bharatiya Karyakari Mandal is of the considered opinion that the solution for current challenges, emerging before the world lies in pursuing the philosophy of Integral Humanism based on the eternal Bharatiya vision as propounded by Pandit Deendayal Ji Upadhyay. The basis for this philosophy is to nurture the world with an integral vision, inspired by the sense of universal wellbeing of the living and non-living entities of the world.

Today, the growing economic disparities in the world, environmental imbalance and terrorism have been posing a severe challenge to humanity. The problems of unemployment, poverty, malnutrition, along with the growing economic crises in various countries and the hold of multinational companies of few countries over more than two-thirds of the global output etc. are grievously worrisome today across the world, due to pursuing unrestrained capitalism and communist ideology of class struggle. The disintegration of families and psychosomatic diseases are increasing at an alarming rate, due to focusing the outlook of life solely on materialistic needs. On account of indiscriminate exploitation of nature the emerging challenges of natural calamities due to rising temperature, continuous rise in sea level, growing air-water-soil pollution, water crisis, degradation of fertile soil and extinction of living species are all worsening. Today, the terrorism inspired by religious fanaticism and extremist political ideologies has taken monstrous proportions. Consequently, brutal killings of children, elderly and women are increasing relentlessly. The ABKM expresses grave concern towards all these. All these can be eradicated by pursuing the philosophy of Integral Humanism through mutual coordination inter se, from individual to the entire living world and its ecology, pursuant to the eternal integral thought. Sustained development with peaceful co-existence can only be ensured by eliminating undue competition and conflicts inter se the individuals, communities and nations by having a holistic relationship among the individual, family, society, world, the entire living universe and the cosmos.

At the Earth Summit of 1992, organised at Rio De Janeiro by the United Nations Organization, 172 nations had committed themselves to the goals of world peace, sustainable development and environmental protection. Unfortunately, the world has been continuously drifting away from these ideals. Once again in the Paris Summit of 2015 most of the countries of the world have committed themselves for achieving the goals of controlling rising global temperature. To fulfill the aforesaid ideas, all the nations, as an integral part of the world, need to strive for collective development with restraining consumption, and all the citizens have to behave with an approach of holistic relationship among the family, society and nature, then only sustainable harmony in the world can be ensured without struggle and conflict.

This is the centenary year of Pandit Deendayal Ji Upadhyay and is also the 51st year of his propounding the philosophy of Integral Humanism in light of eternal Bharatiya vision, relevant to present times. Considering this as the most appropriate opportunity for its implementation, the ABKM calls upon all the citizens including Swayamsevaks, the Union and various State Governments, and the thought leaders of the world to put in all possible efforts to ensure coordination among the constituents of the world order, including nature. For this purpose, appropriate experiments shall have to be conducted along with the development of an appropriate model. This would facilitate fulfilment of the aim of blissful life of all living beings across the globe and universal wellbeing.