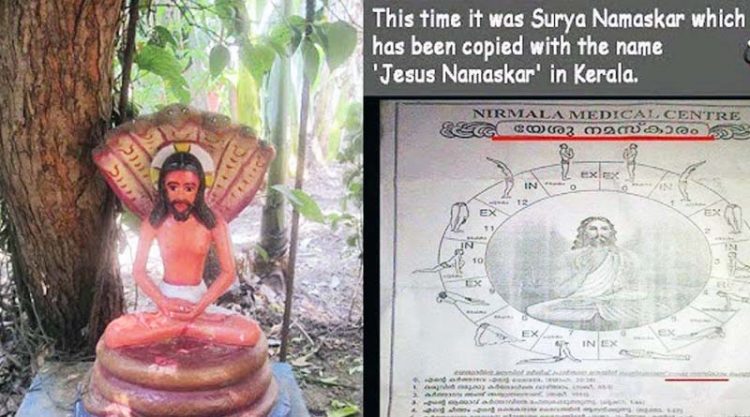 ShareTweetSendTelegram
The grand designs of the conspiratorial church is on display in the Hindu terrain of socio-cultural symbolism and worshipping traditions. The openness of Hindutva is being subverted into the narrowness of papacy through misappropriation
The Church is not exactly known to respect local traditions as it has spread among native people by showing their pagan traditions and culture as being inferior to that of the Christians. When this continuous vilification of native culture hasn’t worked, the Church surreptitiously adopts enculturation – a systematic appropriation of local culture and practices. This approach is being observed in Kerala, Tamil Nadu and parts of Karnataka in stages with sanction from the local clergy. The initial adoption happens in the name of respect for local tradition but later evolves to appropriation and then detaches it from the natives.

St. Mary’s Assumption Church in Kottekad imitating the tradition by carrying the portrait of Our Lady of Fatima on Elephants during a feast

Some of the recent appropriations by the Church in South India show how the Church works to imitate, then appropriate and then claim ownership.
Desi Bible
The Catholic church in Thiruvananthapuram has come out with an “Indianised” version of the Bible which has verses from the Vedas and Upanishads. Church spokesman Paul The lakat had claimed that the Biblical text remains the same, but verses from Vedas and Upanishads have been used to interpret Christian teachings. Therein lays the problem. Interpretation of Vedas regarding Christian teaching would surely mean misinterpret or arrive at conclusions as they wish. Moreover, if the Bible is all superior as claimed by the Church what is the need for appropriation from Vedas and Upanishads?

New Community Bible Cove
Thiruvananthapuram Archbishop Sosa Pakiam, in his preface to the Bible says, a unique feature of the New Bible is that it has many references to the spiritual message and biblical references to that of the spiritual message and biblical values found in the scriptures of other great Indian religions.
This trend will mean to undermine Hindu texts to show that the Vedas and Upanishads were borrowed from the Bible. Similar claims have already been made by many pastors.
Christhu Bhagavadgita
Christhu Bhagavadgita written by D Babu Paul claims that it is a journey through ‘Sermon on the Mount’ or ‘Giri Prabhashanam’ in Malayalam. It is a collection of sayings of Jesus Christ, which emphasises his moral teaching, found in the Gospel of Mathew. It is clear that it is attempting to imitate the Bhagavad Gita but undermines the importance of the Gita by appropriating its name.

Christhu Bhagavadgeetha
This attempt at misleading gullible people with the name of Gita is yet another way to digest Hindu culture. Remember, that all sources and references will be removed except the title.
Appropriating Temple Traditions
A church in Kerala seems to have run out of options to hoodwink people. It has not resorted to appropriating ancient Hindu tradition where deities are carried on elephants in a procession throughout the town. From Guruvayoor to Trissur Pooram to Mysore’s Dasara, it is an age-old practice of the Hindu temples. However, now the Church attempts to digest the practice.
St. Mary’s Assumption Church in Kottekad imitated the tradition by carrying the portrait of Our Lady of Fatima on Elephants during a feast. The elephant’s headgear and the umbrellas is a replica of the Hindu temple tradition. People in the church sit on the elephants with umbrella covers. The designs of crosses, angels, the Sacred Heart, Our Lady of Fatima, and other Christian symbols are on display.
Jesus Sahasranama
With the Psalms not enough to cut into the Hindu fold to confuse and convert them, another new tool seems to have been invented by the Church. Modelled after Hindu Sahasranamas of various deities is the Jesus Sahasranama. It was reportedly composed by KU Chacko of Kerala in the 1980s. He claimed to be a Sanskrit scholar and came out with this version of Jesus Sahasranama which is in practice in many churches in Kerala.

Jesus Sahasranamam
One such mantra from this Jesus Sahasranama is “Om Shri Brahma portrayal Namaha:” which is translated as “Oh lord, son of God, we praise you”. The very meaning of Brahma, its reference to Hindu trinity has all been obliterated.
Such misappropriation has long-term effects as a couple of generation down the line, the very meaning of Sahasranama could be appropriated by the Church by removing all references to its origins in the Hindu culture.
Appropriating Sabarimala
One of the age-old practices of Hindus in Kerala is the Sabarimala yatra where millions from all over the world come together for the darshan of Swami Ayyappa. This is a practice that brings together Hindus irrespective of caste, creed, sect or denominations. There can be no other better practice to digest for the Church as it serves both to confuse gullible Hindus but also propagate the myth of St. Thomas.
The Church claims that St. Thomas, one of the apostles of Jesus had travelled to Kerala and preached on a mount which is in the same Western Ghats range as the Sabarimala hills. The myth of St. Thomas has been propagated so much that the shrine in his name is one of the major pilgrim centres for the Christians in Dakshin Bharat.

Jesus Panchamrit
The church in Kerala has also propagated the practice of trekking up the Malayattoor hill, where the St. Thomas shrine is located, much like the Sabarimala trek of the Ayyappa devotees. If the Ayyappa devotees carry ‘Irumudi’ during the Sabarimala pilgrimage, the Christians carry the cross.
Local reports say that in the act of piety, several Hindus in the area take this pilgrimage which has been marketed by the local Church as an alternative to Sabarimala. This is dangerous and is bound to cause untold damage to the Sabarimla tradition if left unchecked.
Appropriating Murugan
There have been umpteen efforts to hijack Hindu Lord Murugan into the Evangelical narrative and paint him as a non-Hindu apostle. Foremost among such efforts is from Patrick Harrigan, a self-proclaimed scholar working at the behest of Christian Missionaries and the Church in Tamil Nadu has fully backed any such claims.
Kartikeya, as Murugan or Subrahmanya, is found as a primary deity in temples wherever communities of the Tamil people live worldwide. These so-called scholars backed by the Church claim that Muruga was a tribal Dravidian god appropriated by the Aryans! As absurd as it may seem, the narrative being built has already confused many common people in the state.
John Samuels from the Institute of Asian studies furthered this idea and conducted various conferences on Lord Muruga, where papers were presented saying that Murugan is not a Hindu god but a separate god for Tamizh/Dravida people. The latest attempts to hijack Lord Muruga are a boon for politicians like Sebastian Seeman, leader of a fringe group called “Naam Tamilar Katchi”. Seeman follows this strategy for his political benefits. He is working to separate Murugan from Hinduism.
With such claims entering the academic fold recently, the damage done by such claims can drive a wedge between communities.
ShareTweetSendShareShare