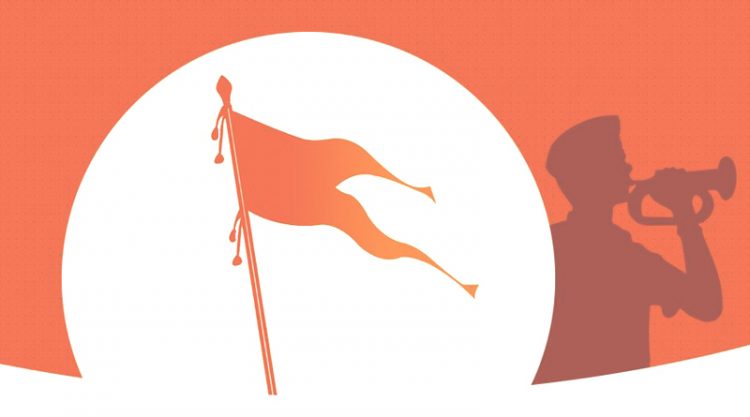 Media is in a flutter about Madhya Pradesh Congress talking of banning RSS and related organisations from government properties and prohibiting government employees from participating in RSS activities. For me it shows Nehru family and its durbaris’ RSS fetish or obsession. This fetish goes back to 1947.

This latest attempt by MP Congress is nothing but continuing the legacy of their colonial masters faithfully who had first passed a law in December 1932 banning government employee’s participation in RSS activities. Then, feeling that RSS is not being pressurized, in December 1933 they extended the ban to government teachers too. The Congress bill of 1964 banning government servants from being members of RSS or attending its programmes is based on this British Law.

Incidentally, this British law was opposed in MP by Congress and Muslim members too when it was debated as a cut motion! There are documents showing how British CID was keeping a close watch on RSS through 1942-1943 and there on.

Congress irritation with RSS was apparent though strange even at that time. Dr. Hedgewar was always appreciative of Congress and participated in 1930 Salt Satyagrah, undertaken as Jungle Satyagraha in Vidarbha even after he left Congress to float RSS. He also directed all RSS shakhas (not very big at that time) to celebrate 26th January 1930 as Independence Day as directed by Congress leadership after passing ‘Full Independence’ resolution.

In Faizpur Congress plenary session of 1937 the flag got stuck on the 80ft flag pole. A swayamsevak Kishan Singh Pardeshi climbed up the pole and freed the flag. He was highly applauded. Congress workers wanted him to be feted by Jawahar Lal Nehru himself. But, when the small minded leaders realised that he was an RSS swayamsevaks, they dropped him like hot potato. When Dr. Hedgewar came to know of this courageous act, he specially met Pardeshi in Dhule and felicitated him with a small silver plate.

The RSS fetish of Congress is inherited from Jawaharlal Nehru who was rattled by growing popularity of Rashtriya Swayamsevak Sangh (RSS) due to its sterling role in saving Hindus and Sikhs in Sindh, Punjab and Jammu Kashmir from Jihadi violence and taking care of displaced brethren on Western front as well as Eastern front of newly carved out Pakistan. Congress leaders had escaped the violent partition to reach safe climes of Delhi much earlier, many with the help of RSS and abdicated their role as leaders of the society. The political games within Congress saw some Congress leaders supporting or being neutral about RSS while members beholden to Nehru trying to suppress RSS somehow.

In October 1947, Satara Congress committee warned its own government to control RSS or “they would be ‘forced to adopt 1942 tactics to crush it.” CM B G Kher advised his colleagues to desist from this kind of language and control themselves. In November 1947, Maharashtra government withdrew its permission for a state level meeting of over 100,000 RSS swayamsevaks, just a week before the event, citing law and order problem, though there was no such issue.

Perturbed by the directives to ban RSS and Akali Dal, The Tribune editor in its issue dated 26th November 1947, criticised the government, noting if these nationalist organizations had not faced the cruel and inhuman Pakistanis with their bravery then thousands of Hindu and Sikh sisters would have been raped, thousands of Sikh and Hindu children would have been butchered.”

Other opinion leaders too wrote strongly against these efforts. It is worth noting that RSS Sarsanghchaalak MS Golwalkar aka Shri Guruji had declared unequivocally in his Vijayadashami address in October 1947 that RSS was not interested in politics as being suggested by its opponents. But, the fear of a strong opposition was disturbing Nehru. This led to his followers creating this fake narrative.

On 19th December 1947, MP Chief Minister DP Mishra called Congress members’ charges against RSS ‘childish’. Infact, he went on to write in his biography that Gandhi’s assassination was used by unscrupulous politicians to defame and pull down rivals.

On 6th January Sardar Patel said in a public meeting that Congress members should not behave with RSS in an unreasonable manner. Later on, there was a meeting of All India Congress Committee on 17th January 1948 in Delhi that passed a strongly worded resolution against Sangh. It demanded state governments also to take anti-Sangh steps. Lowest units of Congress were also asked to follow this policy.

During this time, Central government also released a circular that said, “It was illegal for a government servant to be a member of R.S.S.” Leader of this anti-Sangh front was Uttar Pradesh minister Rafi Ahmed Kidwai. Nehru spoke strongly against RSS in Kanpur during this period as quoted by AN Bali in his book ‘Now it can be told’. Just a few days before fateful day of 30th January, Nehru speaking in Punjab said, “I will crush the RSS”.

Nehru promptly used Gandhi assassination to ban RSS and started a campaign of calumny against RSS. Such was his antipathy to RSS that Shri Guruji was charged with 302, 307 apart from draconian section. Charges under 302 and 307 had to be dropped within a week when the government realised its stupidity.

According to A N Bali, the government of India struck strongly and mercilessly after Mahatma Gandhi’s death at the workers of Hindu Mahasabha and the Sangh. According to a report published in the New Delhi paper ‘The Hindustan Times’ as many as ten thousand persons were arrested in the country after Mahatmaji’s assassination, … A mass hysteria overtook the non-violent Congress workers and supporters. According to government’s own admission in the Parliament as many as 1000 houses were burnt or razed to the ground, hundreds of people attacked, killed or injured in Maharashtra and the rest of country.

This is not an article about Gandhi ji’s assassination so I will not dwell much on it. But, I must note that within 20 days of Gandhi assassination, CID report had clearly exonerated RSS of all the charges. Sardar Patel wrote a long letter to Nehru to explain that the charges against RSS were not true. But, this fact was hidden from people till the classified documents were declassified recently. Thus, the charade of framing RSS and trying to put it down with brute force went on for nearly 1.5 years before the ban was lifted upon presentation of a written constitution, without any conditions. Bombay state government clearly noted in Vidhan Sabha that there were no other conditions. Just to add a little more information, Congress itself had no written constitution for nearly 14 years after its foundation in 1885!

Even after Nehru realised his mistakes later in life after 1962 and invited RSS for the 1963 Republic Day parade, Congress couldn’t get over its RSS obsession.

Four generations of Nehru-Gandhi dynasty have gone criticising RSS and trying to finish it. It became part of its genes. Thus, we find that continued policy of harassing and suppressing RSS through various stratagems including two more bans which were lifted without any conditions both times. Its efforts led by ex-MP CM Digvijay Singh called 28/11 Mumbai attack an ‘RSS conspiracy’. But for great sacrifice of Tukaram Ombale that resulted in arrest of Kasab alive, this label would have surely been stuck onto RSS. A whole ‘Saffron Terror’ narrative was created that fizzled out inspite of 8 years of sustained efforts including misuse of government machinery.

Congress has not succeeded so far because RSS derives its strength from unalloyed dedication to the nation, strong love for the motherland and selfless work for the society. It is not dependent on anyone’s grants or charity. It is rooted in Indian soil and thought.

Whenever Congress feels lost on concrete issues, it picks up RSS as its favourite punching bag. The current virtual ban call in its manifesto is basically a ‘dog-whistle’ to minority vote banks. It also lays bare its anti-Hindu stance inspite of so many noises of being ‘good’ Hindus. This, when their own leaders claim that people asking for Ram Temple in Ayodhya are ‘Bad’ Hindus and asking Hindus to build Ram Temple in their hearts. I fear that this of effort of riding on two boats will sink Congress irretrievably. If Congress wishes to claw back to power and re-emerge as an important party, it must get cured of its RSS fetish and work for the betterment of the nation.

(Extracted from the author’s forthcoming book on ‘RSS and Freedom Struggle.’ All required references have been provided in the book.)