Interrogating the viability of Secularism in the Nation-building Exercise 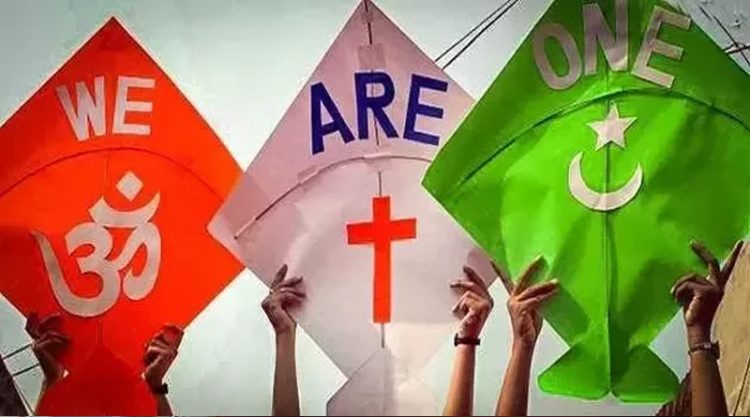 ShareTweetSendTelegram
Instead of allowing the continued use of Secularism as a convenient carpet to brush the reprehensible minority-appeasement policy of the corrupt politicians under, how the principle should be trimmed and tweaked to make it a viable input in nation-building is the question that currently begs an answer
A nation is always in the making, and nation-building is a continuous process. For a constant and massive exercise such as nation-building to be a success, stability at home and safe external borders constitute a sine qua non. A country’s territorial integrity could not be more in danger than when its defence preparedness loses out in priority to out-of-sync foreign policy, attuned to an archaic dogma such as non-alignment, which is no more viable than deadbeat concepts such as imperialism, colonialism or apartheid, in the changing world order.
Likewise, in a vibrant democracy such as Bharat, surrounded by hostile neighbours and unstable partners in development, the importance of a fine-tuned domestic policy of religious and spiritual matters can never be exaggerated. That is because such a system keeps the diverse bodies of religions, faiths and cults counterbalanced and thereby ensures the prevalence of harmony and goodwill among the people.
Why Secularism?
A significant fallout of a thousand-year occupation of our country by Muslim invaders and European colonial powers was the conversion of substantial numbers of its original inhabitants to religions that had their origins outside Bharat. Aside from the beliefs introduced by the invading forces, Bharat has a large body of indigenous religions that have managed to survive the onslaught of foreign invasions. It is essential that notwithstanding their place of origin and manner of introduction, all these religions be accorded their due place in the society and all Indians be allowed to choose the religion of their choice and live in peace without fear of persecution.
At the same time, it is equally vital for the State not to favour or be biased against any religion in the course of providing excellent and clean governance. Besides, adoption of a non-meddlesome policy in the religious matters would instil confidence in the citizens of our country concerning the free and fair dealings of the government in an atmosphere devoid of fear or favour, which is the very basis of inclusive growth and development. Hence, Secularism is accepted as a cardinal principle of the Indian Constitution. When rightly applied and practised, Secularism should do the nation proud.
However, till recently, the ground realities reflected by the social indicators in matters such as religious harmony, economic and social development without animosity and hatred between the people of different communities presented a different picture altogether. The social fabric, which had been left in tatters by the partition, still needs much mending. The communal harmony that happily exists among the people of different communities exhibits signs of an occasional glitch or provocation, instigated by the enemies of the nation from both within and without. Nationalism is the most effective bulwark against communal discord and needs to be vigorously promoted.
Pseudo-Secularism
Secularism is the fig leaf, which the quintessential Indian politician proudly wears and flaunts, in a fly-in-the-face fashion, pushing the nation’s integrity and the upliftment of the less fortunate of his countrymen to the backburner. The motivating factor behind the projection of Secularism as a critical policy is to brandish one’s political correctness, especially on the hearing of the bugle for a forthcoming election. To the corrupt politician, nationalism, nation-building, patriotism, and inclusive growth and progress are passe.

After the independence, Secularism in India has been much abused to consolidate the minority vote bank
During the 60-year reign of the Indian National Congress and its allies at the Centre, Secularism was recast by the powers that be to suit their narrow ends. Good governance, progress and development figured nowhere in their agenda. The more natural way out was to divide the people along communal lines, as the British had done during their rule, to create vote banks and cobble up the isolated communities in the name of Secularism.
In the absence of a genuine policy of non-discrimination between the religions, independent Bharat witnessed uncertain periods of time, marked by communal tension and riots. There was an obvious slant on the part of the government of the day
Minority appeasement became the order of the day, reducing the State policy of Secularism to pseudo-Secularism. The irony of the disturbing development was that those who practised minority-appeasement for the sake of votes and abandoned Secularism in favour of pseudo-Secularism branded BJP, which had sought to set right the imbalance between the minority and majority communities, a communal party, with the aim of turning the minority communities against it.
Although this ploy benefitted the Congress and its allies in the short term, it started working against them in the long run when both the minority and majority communities realised that neither of them was the beneficiary of economic progress or social development during the Congress reign despite the tall promises made on the eve of polls. On the contrary, the minority communities in the BJP-ruled states discovered that communal tension and riots had become a thing of the past, they enjoyed the patronage of the ruling party in return for their political support and became beneficiaries of the inclusive development of the State.
All they had to do for the sake of communal harmony, economic progress and social development, was to swear by nationalism and become equal partners in the task of nation-building, the same as was expected from the majority community. Realisation also dawned on them that a rule by strong State and Central governments by a party of principles and ideology was far more beneficial and conducive to their security than control by corrupt men, marked by empty promises, scams and scandals.
The Fallout
When minority appeasement was the order of the day, and pseudo-secularism ruled the roost, the stability of our nation continually came under severe attacks, with the enemies of the nation succeeding in causing a dent here and a jolt there across the country. Such occurrences weakened the security apparatus, demoralised the people, thwarted democracy and helped the external enemies from across the border to deal blows to the territorial integrity of our country. When our defence personnel fought overt and covert wars across the border and in the troubled border States, intelligence agencies and paramilitary troops had a tough time, carrying out sporadic campaigns against terrorists, Naxals and jihadi outfits, and monitoring the activities of separatists operating in the ruse of political and social activists.
A major casualty of these interesting developments was Secularism, which had run out of steam and was replaced by pseudo-Secularism. This development went unnoticed by a large section of the unwary public.
The recent political events and happenings in our country like the court rulings in matters such as access by all parts of people to the Shani Shingnapur and Sabarimala temples, bans and restrictions on the celebration of Hindu festivals, and construction of Ram Mandir at Ayodhya impinged the Hindu religious sentiments. These decisions have had a salutary effect on the majority community in their outlook and attitude towards the so-called Secularism.
Instead of allowing the continued use of Secularism as a convenient carpet to brush the reprehensible minority-appeasement policy of the corrupt politicians under, how the principle should be trimmed and tweaked to make it a viable input in nation-building is the question that currently begs an answer. As such, all future elections will be fought, with this question featuring predominantly in the minds of the discerning voters.
BY : Dr Sunil Gupta.
ShareTweetSendShareShare