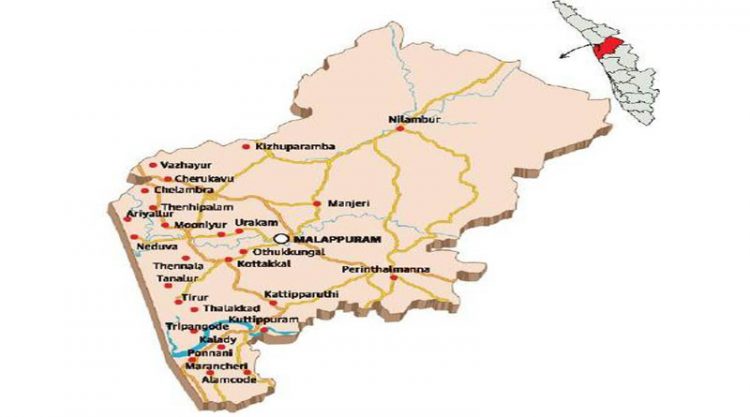 Malappuram. This name only evokes pain, hurt and fear among even those who have never visited it. It is often equated to Kashmir. The Kashmir, whose Hindus have faced all things beyond imagination in order to survive the onslaught of religious terror and vandalism. 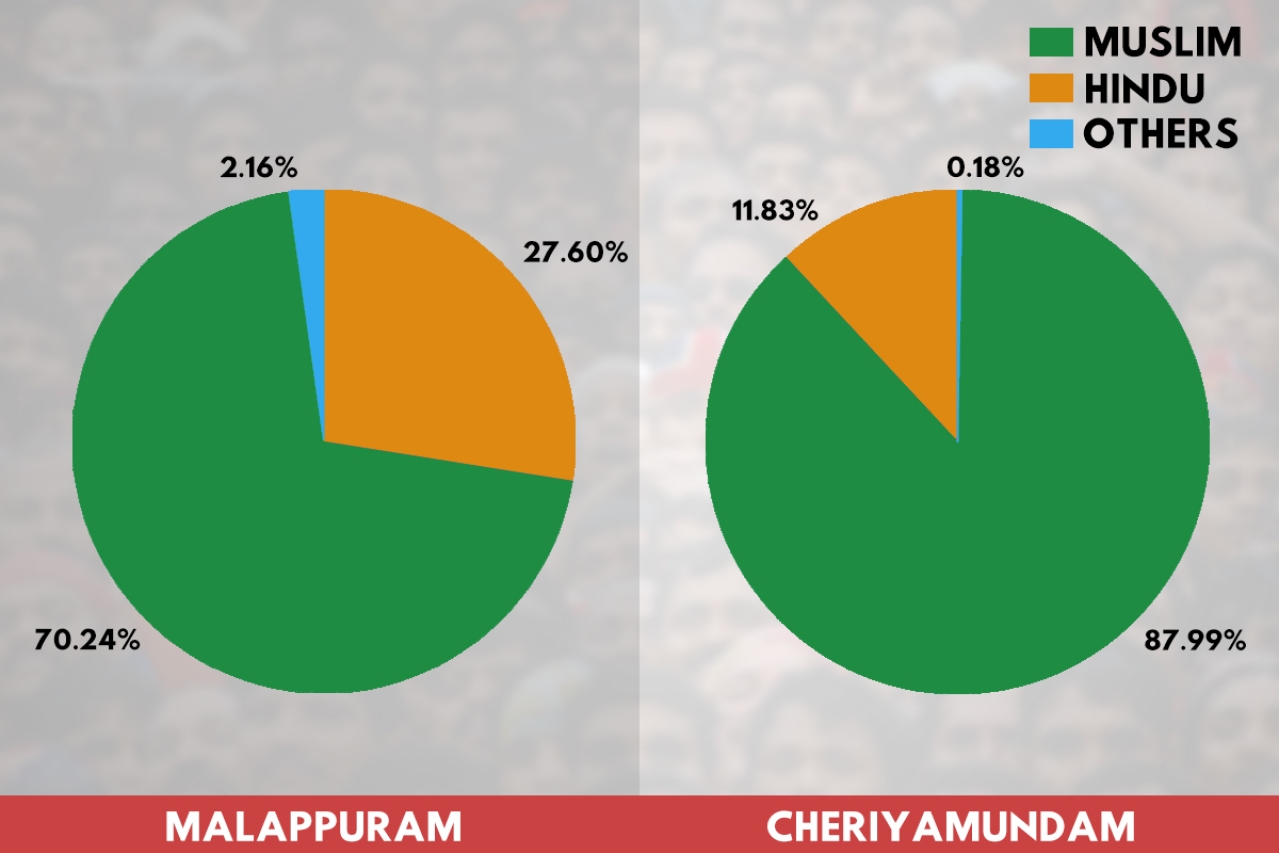 Religion wise population of Malappuram and Cheriyamundam in Kerala (Census 2011)

But even almost a century later, Malappuram hasn’t recovered from the scars of the 1921 Mapillah riots. Temples destroyed, Hindus massacred and chased away unless they gave into conversion, the brutalities are too many to be listed here but are all well documented.And the remnants of the riots are still found buried in whatever little of the past has remained. But sadly, any attempt to heal this scar has only met with further brutality (often backed by systemic support).

Any attempt to reclaim any site that even legally belongs to Hindus has been met with violence, disruption and even government intervention supporting the disrupters. The latest in the tainted history of this town is an attempt to stop the temple refurbishing efforts taking place in Cheriyamundam town of Malappuram.

Efforts by the local Hindu community of Cheriyamundam to rebuild a broken and destroyed ancient temple that had been worshiped by them for over a century has to battle odds uncalled for. First, a truckload of stones lands on the path to the temple blocking the way. Then the priest who was conducting the rituals at the site is attacked. And the latest is an order by the gram panchayat ordering the demolition of the temple as it “violates the grama panchayat act”.

Malappuram is the only Muslim majority area of Kerala. According to the 2011 census, Muslims constitute 70.24 per cent of the population of Malappuram while Hindus are at 27.60 per cent. But in Cheriyamundam town, the numbers are at 87.99 (Muslim) and 11.83 per cent (Hindus).

The temple in question is said to have been destroyed during the Moplah riots of 1921. Early last year (January 2018), the locals had decided to take it upon themselves to clear the area around the temple as it had turned into a wild forest and to reinstate the temple. A Shiva linga was seen lying abandoned, and after clearing the site, volunteers decided to rebuild this temple and reinstall the deity.

A Shiva lingam thrown around the ruins

As they began to clear the area and simultaneously undertook rituals regarding the reinstation, they found a temple well, which also had various parts of the destroyed temple and idols dumped in it (Feb 2018). 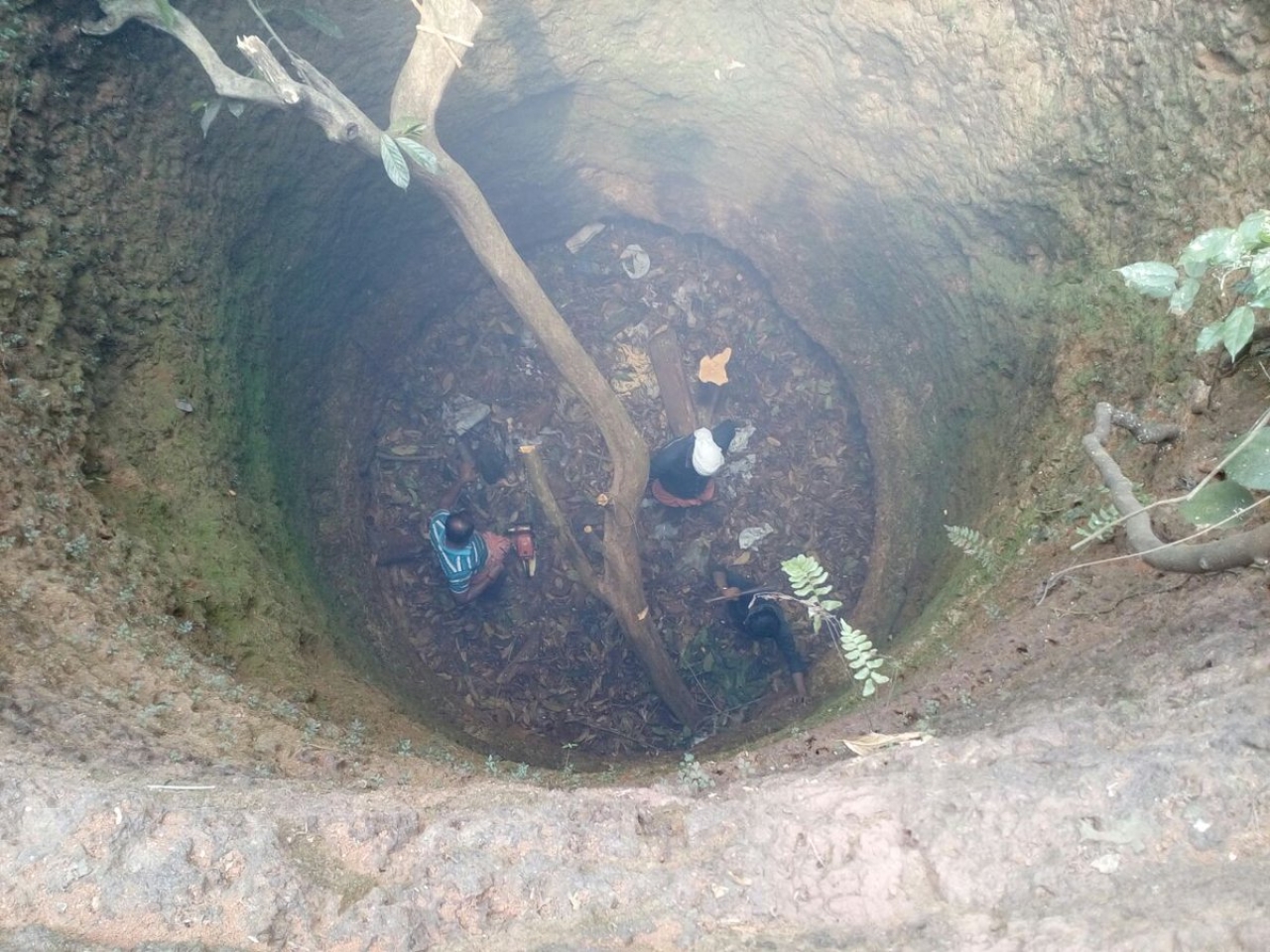 Restoration of a temple well under way. 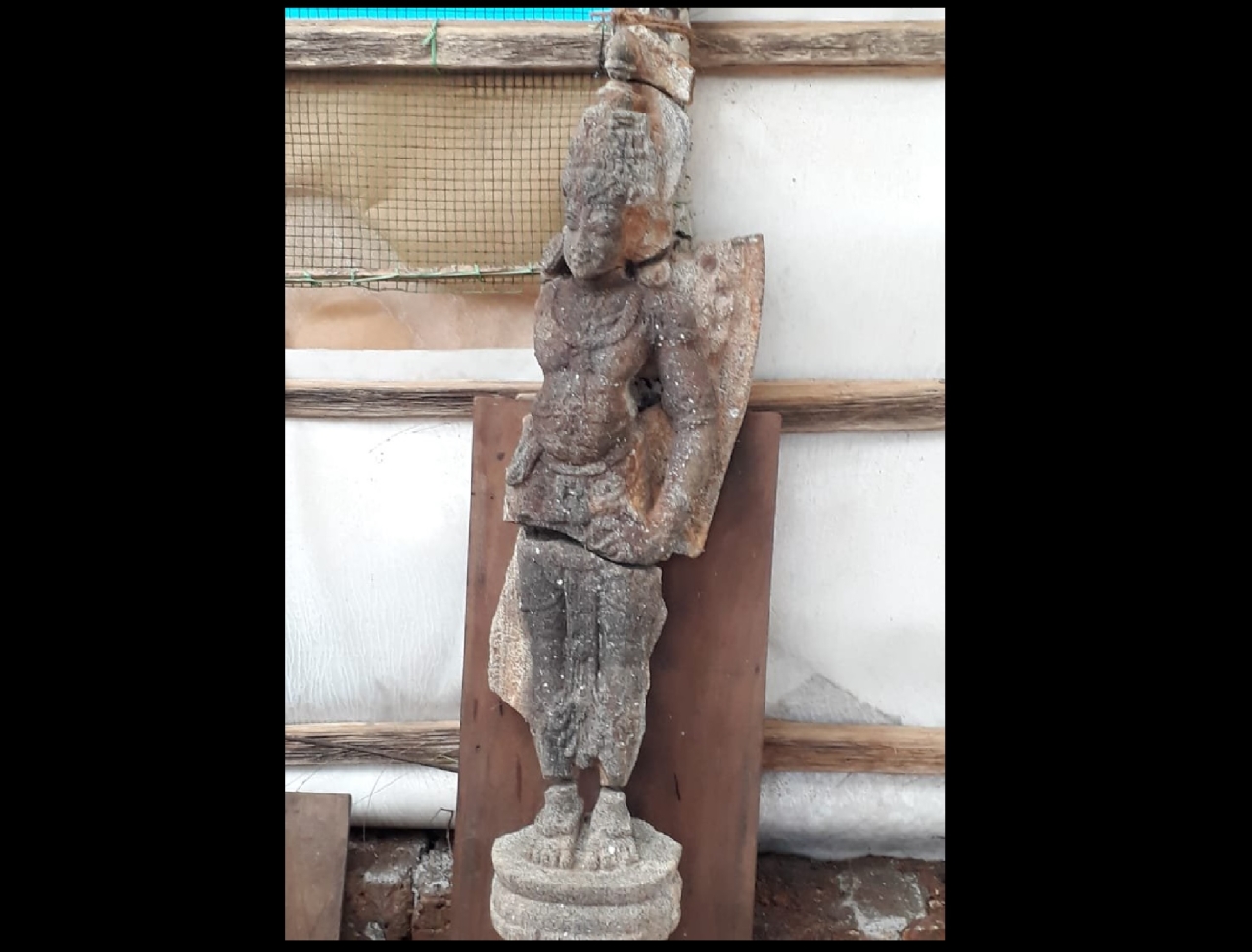 Having confirmed the identity of the idols found in the well and after conducting the desired rituals to ascertain the structure of the temple, in September, this group of locals supported by Hindu organisations is working towards reclaiming temples in the region. 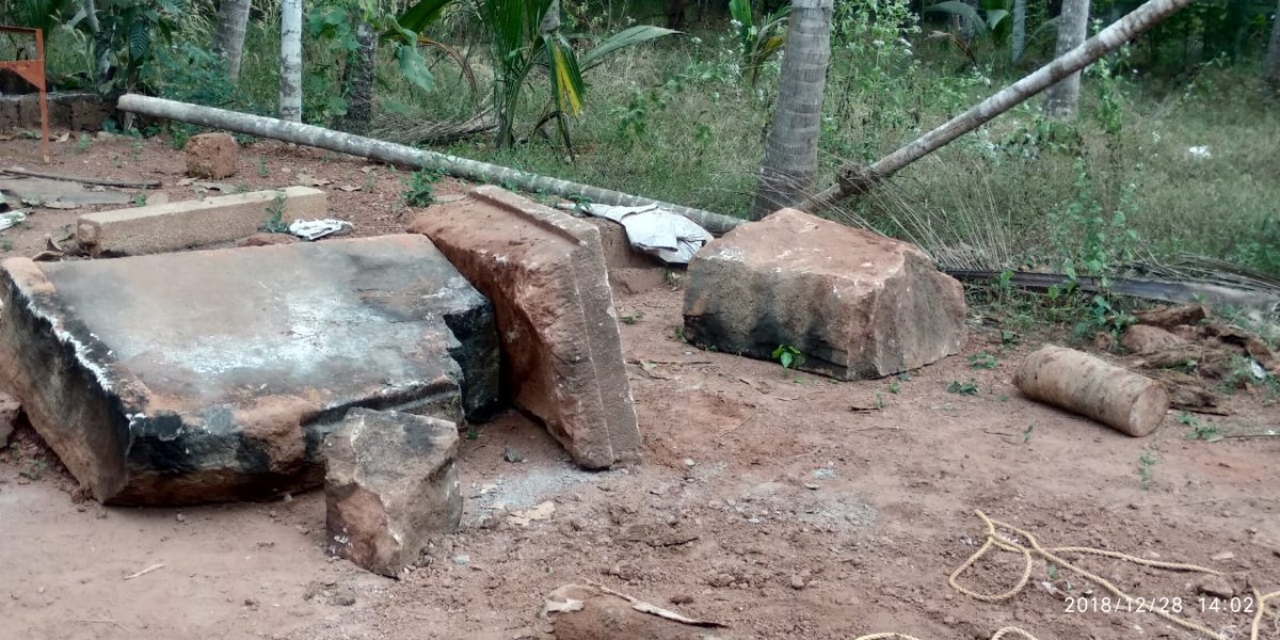 Old foundation stones of the temple

This year began on a good note for them as the ‘shilanyas’ for the temple was held in January (2019) followed by a reconstruction of the foundation of the ‘garbariha’ and the temple. 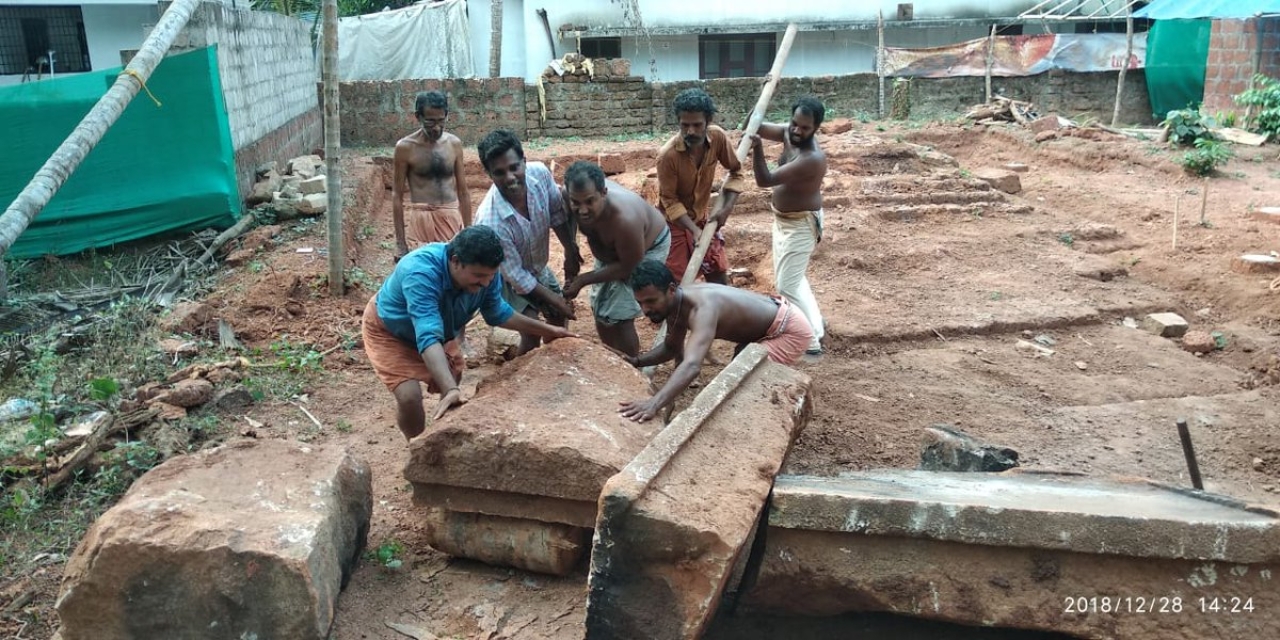 Old foundation stones of the temple being mobilised for restoration.

But can it be that an effort of this kind sees no trouble? Early this week, a truckload of stones was dumped on the path to the temple. President of Kshetra Paripalana Samithi (temple committee) Adhikarathil Appukuttan had the work on the site halted despite which he was attacked by goons who are said to have the backing of the local Popular Front of India (PFI) leaders. 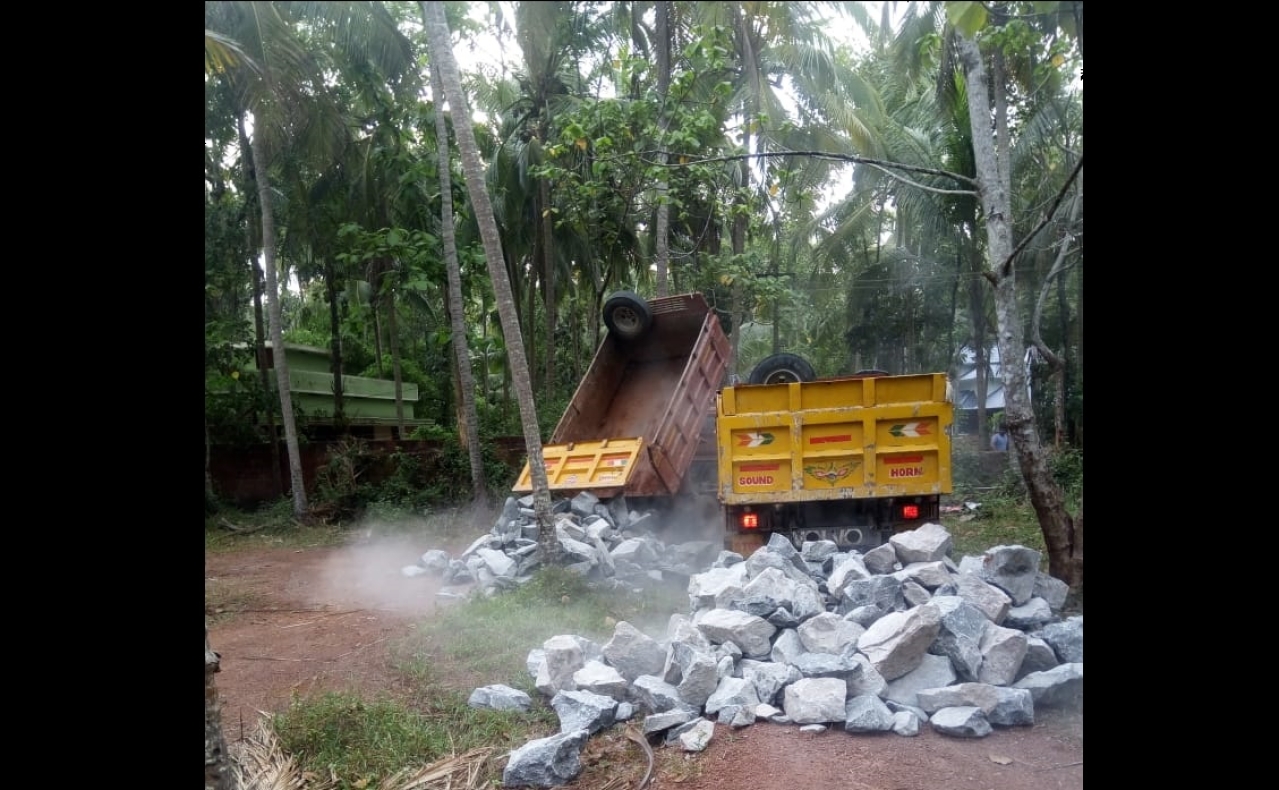 Stones being dumped by the goons as a mark of threat and intimidation.

“ I was working at a place nearby the temple when I got a call saying that around 300 people belonging to religious extremists organisations had assembled at Vaniyanur Subrahmanya temple land and they are constructing a wall in the land belonging to the temple. I requested them not to construct the wall and not to encroach on temple land. A day before, they blocked the way to the temple using huge stones. I was then attacked by the people who had assembled at the location. I was kicked and beaten up mercilessly,” says Appukutan.

To beat it all, the Cheriyamundam Grama Panchayat on 13 May 2019 ordered the demolition of the temple. 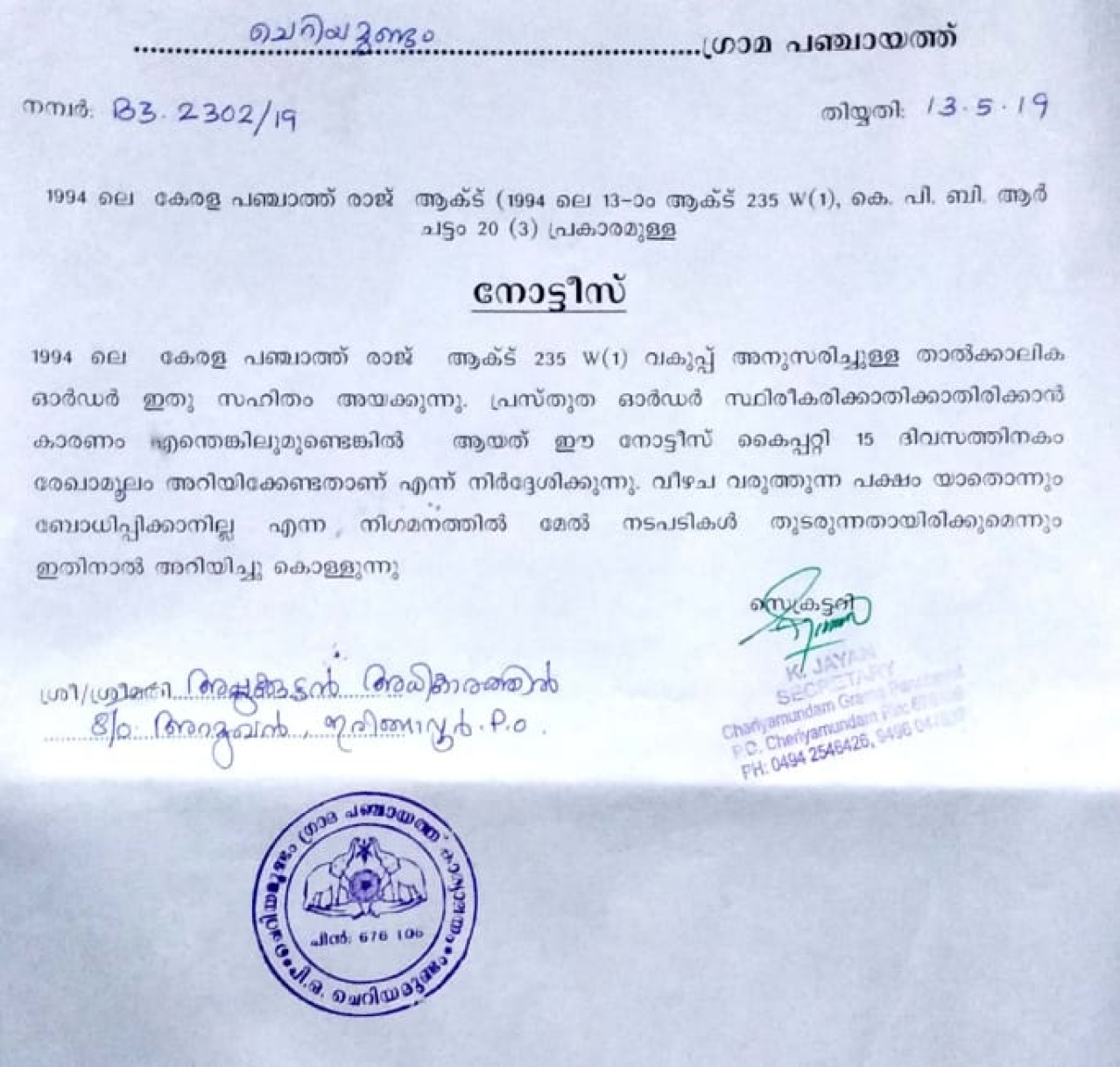 “It’s obvious that their attempt is to encroach temple land by using brute force and prevent the restoration of the Vaniyanur Subrahmanya temple which was demolished during the 1921 Moplah riots. I have high faith in the law of the land and earnestly pray to God to have the temple restored and Pratishta done before I die,” says Adhikarathil, appalled by this action of the government aiding the efforts of those who do not wish to see the temple reinstated. 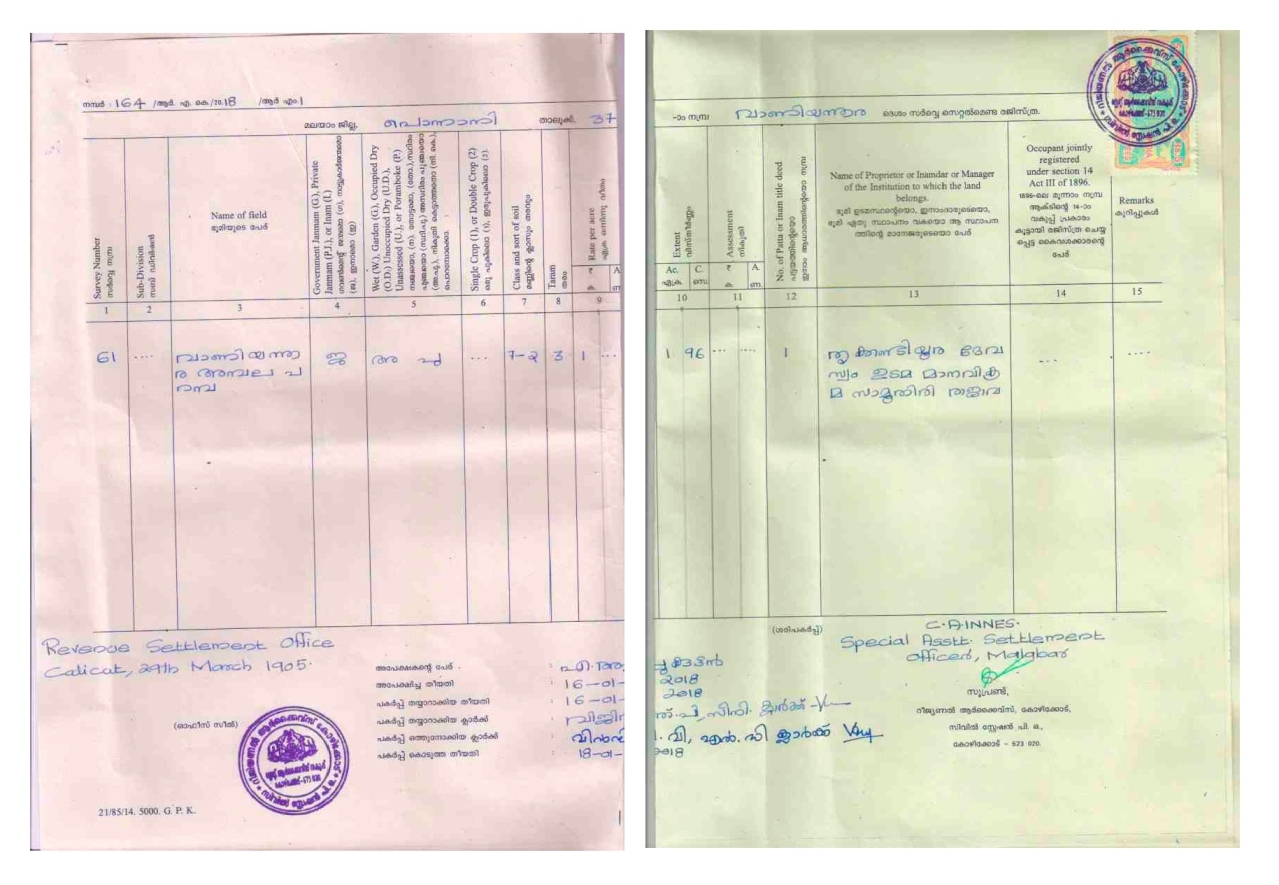 Documents which show that the land belongs to the temple.

The temple is currently on land which is hardly 20 cents although originally, the total stretch of land that it owned was 2 acres. Land records that rest with the temple committee clearly show the ownership and extent of the ‘temple land’.

Suresh Nair, Malappuram Project Coordinator of the Ugra Narasimha Charitable trust, an organisation undertaking restoration of dilapidated Hindu temples in Malappuram district, calls this order and demand for demolition uncalled for as “permission is to be sought only in cases of construction of new places of religious worship and not for the reinstitution of existing places of worship.” 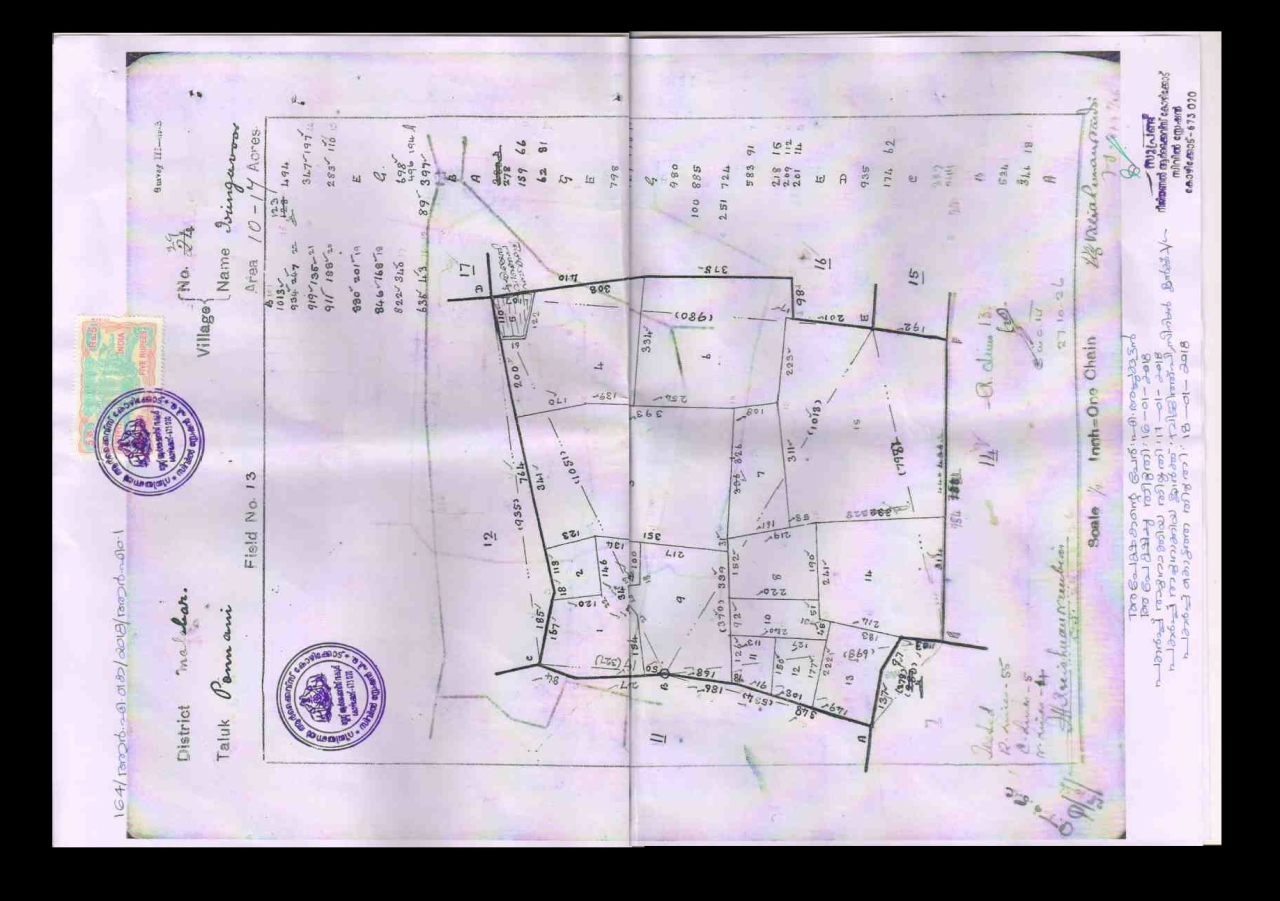 The Kshetra Paripalana Samithi, which had gone to the High Court for eviction of the encroachment in April has also presented this latest development. The case will be heard on 21 May.

Although they constitute hardly 11 per cent of the population in the region, here is a group of proud and devout Hindus who are seeking to exercise their right to pray, their right to religion that is guaranteed to every citizen of this country. 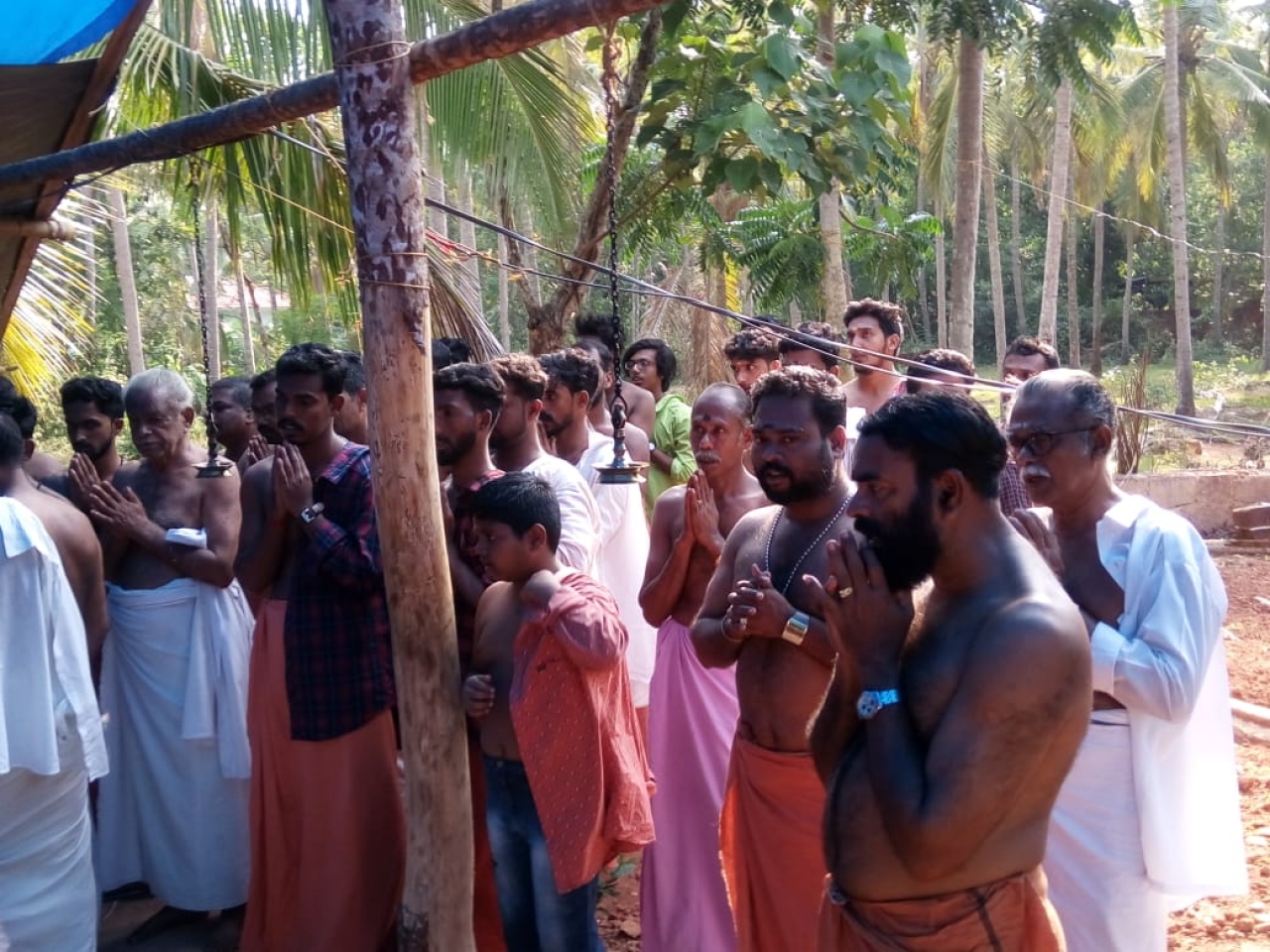 Despite all that has taken place, the locals held a namajapa yajna (chanting ritual) with police protection on Sunday (19 May) at the temporary shrine that they have housed the deity in.

That they have to fight for it says a lot about religious freedom and the privileges enjoyed by the “majority” in this country.