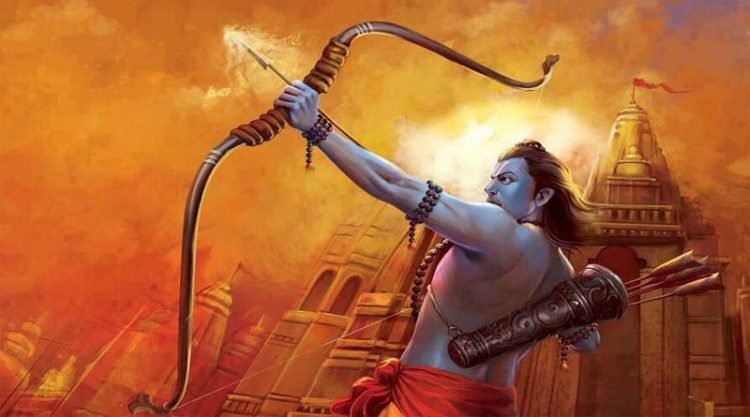 In his four reports made during the years, 1862-63-64-65, (Volume 1), Sir Alexander Cunningham, agreed that Saketa  referred by   Chinese pilgrim Fa Hian as  Shachi and Huen Tsang as Visakha are identical in “the most satisfactory manner”  with Ayodhya of Hindus. Cunninghams says that questions regarding its identity shall be put to rest by several passages in Ramayana and Raghuvamsa in which Saketanagara is distinctly called the capital of Raja Dasaratha and his sons. Cunninghams says that H.H.Wilson in his Sanskrit Dictionary also calls Saketa as the City of Ayodhya.

Cunningham clearly says that although there are many holy temples in Ayodhya, most of them occupy the site of more ancient temples, many of them destroyed by Islamic invasions.He sites the examples of Ram Kot or Hanuman Garhi on the eastern side, of Ayodhya city.Ram Ghat on the northeast, is also sacred. On northwest is the place where Rama’s body was cremated and where stood a banyan tree called Ashok Bat.

The only archaeological remains at Ayodhya are three earthen mounds, to the south of the city,  according to Cunningham. They are, Mani Parvat, Kuber Parvat, and Sugriv Parvat.

In 1889-91, an ASI team led by Alois Anton Führer conducted the second survey of Ayodhya. Further wrote his findings in his work titled The monumental antiquities and inscriptions: in the North-Western Provinces and Oudh. He wrote that the existing Vaishnava and Jain temples in the city were modern, although they occupied the sites of the ancient temples that had been destroyed by Muslims. According to Führer, Mir Khan built the Babri mosque at the place of Janmasthanam temple in 930 AH (1523 CE). He stated that many columns of the old temple had been utilized by the Muslims for the construction of the Babri mosque:

Professor A.K. Narain conducted the third excavation in Ayodhya in 1969-70. Narain observed that the excavated sites indicated human habitation as old as the 5th century B.C. He was also convinced that there was evidence of a strong Buddhist presence in the area (Indian Archaeology 1969-70 – A Review). He fixed the antiquity of Ayodhya to the early 17th century B.C.

Later, a  team of archaeologists of the ASI, led by former Director-General of  ASI, Prof.  B.B. Lal worked on a project titled “Archaeology of Ramayana Sites”,(1975—76) which excavated five Ramayana-related sites such as Ayodhya, Bharadwaj Ashram, Nandigram, Chitrakoot, and Shringaverapura. Lal’s excavation at Sringaverapura associated with Ramayana has taken the antiquity of the site to the Ochre Coloured Pottery level of second millennium BC.

At Ayodhya, Lal’s team found rows of pillar-bases which must have belonged to a larger building than the Babri Mosque. Accordingly, Prof. Lal noted in 1990 that archaeological findings of burnt bases of pillars made of brick, a few metres from the mosque, indicated that a large temple stood in alignment with the Babri Mosque since the 11th century. In 1998, Lal also observed that in a trench at a distance of four meters south of the mosque, parallel rows of pillar-foundations made of brick-bats and stones were found.

In his 2008 book, ‘Rama: His Historicity Mandir and Setu’, B.B.Lal  observed, “attached to the piers of the Babri Masjid, there were twelve stone pillars, which carried not only typical Hindu motifs and moldings but also figures of Hindu deities. It was self-evident that these pillars were not an integral part of the Masjid, but were foreign to it”.

Veteran South Asian archaeologist Prof. Dilip Chakrabarti discusses the importance of Ramayana sites such as Ayodhya and Sringaverapura in his classic work “ The Archaeology of Ancient Indian Cities” published in 1997.

In July 1992, eight eminent archaeologists led by former ASI directors, Dr. Y.D. Sharma and Dr. K.M. Srivastava, went to the Ramkot hill at Ayodhya which was referred by Alexander Cunningham. Their findings included religious sculptures and a statue of Vishnu. They said that the inner boundary of the disputed structure rests, at least on one side, on an earlier existing structure, which “may have belonged to an earlier temple”. The objects examined by them also included terracotta Hindu images of the Kushan period (100-300 AD) and carved buff sandstone objects that showed images of Vaishnav deities and of Shiva-Parvati. They concluded that these fragments belonged to a temple of the Nagara style (900-1200 AD).

During the demolition of the Babri mosque in December 1992, three inscriptions on the stone were found. The most important one is the Vishnu-Hari inscription inscribed on a 1.10 x .56 meter slab with 20 lines that were provisionally dated to ca. 1140. The inscription mentioned that the temple was dedicated to “Vishnu, slayer of Bali and of the ten-headed one” (Ravana).The inscription is written in the Nagari Lipi script, It was examined by world-class epigraphists and Sanskrit scholars led by  Prof. Ajay Mitra Shastri.

Ajay Mitra Shastri, a veteran scholar  in epigraphy and numismatics, examined the Vishnu-Hari inscription and stated:

“The inscription is composed in high-flown Sanskrit verse, except for a small portion in prose, and is engraved in the chaste and classical Nagari script of the eleventh-twelfth century AD. It was evidently put up on the wall of the temple, the construction of which is recorded in the text inscribed on it. Line 15 of this inscription, for example, clearly tells us that a beautiful temple of Vishnu-Hari, built with heaps of stone (sila-samhati-grahais) and beautified with a golden spire (hiranya-kalasa-srisundaram) unparalleled by any other temple built by earlier kings (purvvair-apy-akrtam krtam nrpatibhir) was constructed. This wonderful temple (aty-adbhutam) was built in the temple-city (vibudh-alaayni) of Ayodhya situated in the Saketamandala . Line 19 describes god Vishnu as destroying king Bali and the ten-headed personage (Dasanana, i.e., Ravana.

The late Dr.S.P.Gupta  did monumental work in this context by coordinating archaeologists and their findings at Ayodhya.

In 2003, Dr. B.R. Mani, and their team under ASI did excavations at Ayodhya. Following the order of the Lucknow bench of the Allahabad High Court on March 5, 2003, the Archaeological Survey of India team led by Dr. B.R. Mani has been excavating the land on which the Babri Masjid had stood from AD 1528 till December 6, 1992. In August 2003, the ASI handed a 574-page report to the Lucknow Bench of the Allahabad High Court. The report included findings from Northern Black Polished Ware (1000 BC),  as well as cultural remains from Sunga, Kusana, Gupta, Post Gupta Periods at Ayodhya. The ASI report also observed that during the 11-12 century AD,  a huge structure of almost fifty meters in north-south orientation have been found. Only four of the fifty pillar bases belong to this level. Above this lay a structure with at least three structural phases which had a huge pillared hall. Dr.B.R. Mani and colleagues in their excavation report stated that features of a 10th-century temple were found beneath the site where the 16th-century Babri Masjid stood until its demolition in 1992.

Finally, the announcement of the findings in the Allahabad High Court on 25 August 2003 was accompanied by serial blasts in Mumbai, killing at least 46 persons and injuring over a hundred, was certainly a tragic coincidence.

In January 2003, Canadian geophysicist Claude Robillard performed a search at Ayodhya with a ground-penetrating radar which identified that the mosque at Ayodhya was not constructed independently on the ground, but on another structure, The radar survey concluded that “there is some structure under the mosque. The structures were ranging from 0.5 to 5.5 meters in depth that could be associated with ancient and contemporaneous structures such as pillars, foundation walls, slab flooring, extending over a large portion of the site”. Robillard also stated that “There are some anomalies found underneath the site relating to some archaeological features”.

The ASI excavated ninety trenches to verify anomalies and anomaly alignments found by the Ground Penetrating Radar Survey conducted by Tojo-Vikas Ltd. The diggings suggest that people using Northern Black Polished Ware (NBPW) first occupied the disputed site at Ayodhya, in the period 1000 BC – 300 BC. No structures of this period have been found in the small area excavated, but the material culture shows terracotta figurines of female deities with archaic features, beads of terracotta and glass, wheels and fragments of votive tanks. An important find includes a round signet with a legend in Asokan Brahmi.

In October 2019, former director-general (DG)  the Archaeological Survey of India Prof. BB Lal and three others of Ramayana project in mid-seventies clarified that eminent archaeologist  KK Muhammed was part of the team that excavated the Ram Janmabhoomi-Babri Masjid site at Ayodhya in 1976-77. This statement has cleared controversies raised by AMU –left historians that KK Muhammad was not part of the team that excavated Ayodhya. Muhammad said that a temple dedicated to Vishnu existed at the site before Babri Masjid was built at Ayodhya.