Citizenship Amendment Bill: Not a communal but humanitarian issue 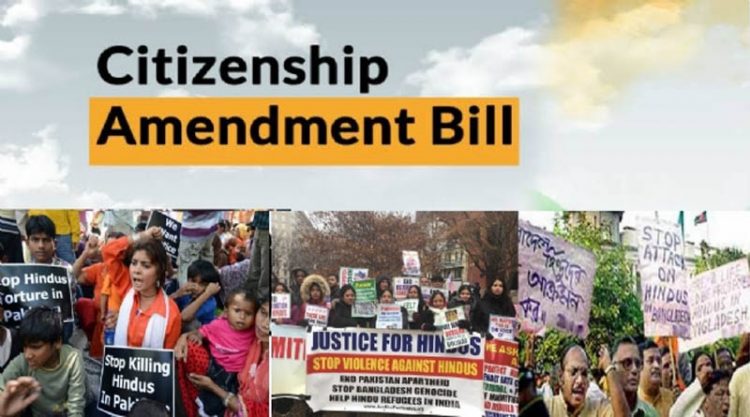 The union cabinet has cleared the CAB which seeks to enable the provision of Indian citizenship to people belonging to the six minority communities – Hindus, Sikhs, Buddhists, Christians, Jains and Parsis from Afghanistan, Pakistan and Bangladesh. Congress and Left parties oppose the amendment citing it as ‘communal’.

Ever since the Modi government listed the Citizenship Amendment Bill (CAB) for passage during the current winter session of the parliament, there have been the usual comments from people opposing the bill as witnessed last time in January this year when the bill was passed in the Lok Sabha. Notwithstanding the opposition from usual quarters, the union cabinet has cleared the CAB on Wednesday. The bill is ready to be tabled in parliament during the winter session.
In the session of the Assam Legislative assembly that was on last week, Congress had brought in an adjournment motion to discuss the CAB which was rightly rejected by the Speaker. Former Assam chief minister Tarun Gogoi termed that as the blackest day Assam history and also mentioned that the Bill will not only violated the Assam Accord but also was against the Constitutional provisions of secularism and equality before the law. Needless to say, as one of the seasoned politicians having remained chief minister of the state for 15 years and also a central minister, he knows the provision of the law as and conventions much better than anyone else. His criticism that the Assam government has ‘gone against the interests of the people of Assam’ doesn’t stand as the people of Assam across the two valleys and hills have voted comprehensively for the BJP that promised to implement CAB if voted to power. Instead, the former CM should have reflected back on what he did to implement the Assam accord in his 15 years as CM and also solve the problem of illegal immigration. He should have understood the intent behind the CAB to see how people who were forced into a few states from the three countries of Afghanistan, Bangladesh and Pakistan due to persecution were rehabilitated and settled as did his own party government in Rajasthan the same day as he wrote the FB post.
As the granting of citizenship is a sovereign function, parliament in its right is the forum to deal with CAB and not the state assembly and the Speaker was right in not allowing the adjournment motion. Secondly, even in parliament, deliberations in one house are not discussed in the other. On the other hand, the union government and the BJP in particular through NEDA has been engaging with all political parties and social and community groups about their apprehensions about the bill and the Home minister himself is doing that exercise to assuage everyone’s concerns and explain how the bill takes care of everyone’s interest around land, culture, and aspirations. He has made it clear that citizenship is being considered for persecution victims and not for economic migrants.

Coming to the substantive issue, the CAB basically seeks to address the issue of enabling the provision of Indian citizenship to people belonging to the six minorities communities- Hindus, Sikhs, Buddhists, Christians, Jains and Parsis from Afghanistan, Pakistan and Bangladesh who are no more considered illegal in the context of the Foreigners Act, 1946 and the Passport (Entry into India) Act, 1920 ever since the notifications of the Ministry of Home Affairs (MHA) of the union government issued in September 2015 and July 2016. These above-mentioned individuals from those three countries ‘who were compelled to seek shelter in India due to religious persecution or fear of religious persecution’ and those who had come to India before 31 December 2014 as defined in the MHA notification of 7 September 2015. And those individuals would be provided Indian citizenship under naturalization after ‘the aggregate period of residence or services of a government in India’ after spending six years instead of the existing eleven years.
In no way, the CAB was inviting fresh immigration from those countries neither it was offering citizenship by subverting the laid down procedure. These individuals who came before 31 December 2014 are living in the country already and not necessarily in the state of Assam and so adding an additional burden to alter the existing demographic pattern is misplaced. They have human rights and not voting rights at this stage. Also since there is a wait for six years, the proper mandatory checks would be done for each and every application and hence the security threat doesn’t arise nor do these individuals make an impact on demographic or electoral premises.
The former CM also criticised that the CAB is in violation of the Indian constitution. In that, he probably draws on the provisions of Article 14 which guarantees equality before law and Article 25 which allows people to profess, practice and propagate their own religion and faith. Thirdly The CAB doesn’t violate the spirit of Article 14 as the bill upholds the test of reasonable classification which was defined by the seven-judge bench of the Supreme Court in the State of West Bengal vs Anwar Ali Sarkar case (AIR1952 SC 75). The Supreme Court has held that “The principle of equality does not mean that every law must have universal application for all persons who are not by nature, attainment or circumstances in the same position, as the varying needs of different classes of persons often require separate treatment. It would be inexpedient and incorrect to think that all laws have to be made uniformly applicable to all people in one go’. Here is a group of people from these communities who are facing persecution and fear persecution in those countries due to their religion as they are in a minority and their situation is different from the majority there. Further article 25 of the constitution doesn’t apply at all as nobody is being prevented from practicing or propagating his or her religion in the context and applicability of the bill.

It will also be pertinent to realise that CAB is for the whole of India and not confined to Assam and other northeastern states only where the pains of the illegal migration in the past decades still evoke emotional feelings. The Modi government is very sensitive to the concerns of all groups in the northeast and definitely the bill will factor in provisions to dispel their fears. Clearly, after the abrogation of Article 370 in Jammu and Kashmir, the government has made it clear that all special provisions in northeastern states will remain. Also, the Home Minister has personally met the political leaders as well as community leaders from almost all the states of the northeastern region last week to explain to them how the CAB would not harm their interests and on the other hand, help them to solve the issue of illegal migration.
Clearly the CAB has its sincere merits and hopefully will be passed soon by parliament.
Tags: #CAB
ShareTweetSendShareShare