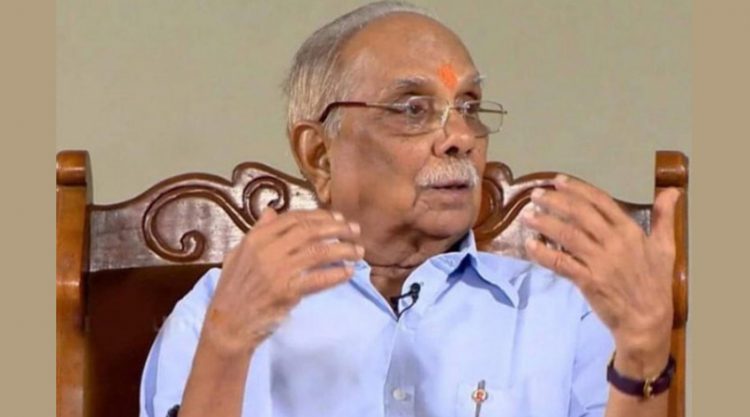 Parameswaran’s role in organising Bharatiya Jana Sangh (BJS) in Kerala and the National Council meeting at Kozhikode in 1967 heralded the entry of the party into the state.

As it was transforming from University of Travancore to Kerala University, the premier university of the state sent a letter to P Parameswaran, the RSS ideologue who breathed his last on Sunday morning.
It was a request to receive the gold medal and certificate that he earned as a rank holder in BA history (honours) as a student of University College Thiruvananthpuram in 1950. The studious boy from Muhamma in Alappuzha district was more interested in reading history books of the state library than the notes from classrooms. He dedicated himself to national reconstruction by joining the Rashtriya Swayamsevak Sangh (RSS) during his student days. He left the city, after passing the course with flying colours, and did not even bother to collect the certificates of merit. His primary interest was Hindu society and the RSS.
Though considered a top ideologue of present times, Parameswaran could not attain the formal training of the Sangh, which lies in attending the camps. He was suffering from Wet Pluracy, a lung disease, and had to undergo treatment and subsequent rest in Nagpur. During the stay at the headquarters of RSS, he came in proximity to Golwalkar, the ideological supremo of the outfit.
The conviction gained straight from Golwalkar made Parameswaran a staunch believer of the ideology. With that conviction, he was able to take a strong stand against the Ramakrishna Math in Kolkata when he argued in the HC that they are not Hindus. Being a ‘dikshadhari’ from the Math didn’t prevent him from pointing out the error.
The contribution of Parameswaran to Kerala and Hindu society as a whole will be remembered for the introduction of Ramayana Month four decades ago. He was instrumental in organising a ‘Vishala Hindu Sammelanam’ — a meeting of all the Hindu organisations of the state in 1982 in Kochi which mooted the idea of reciting Ramayana throughout the Malayalam month of Karkkidaka which was until then considered an inauspicious month.
It soon turned out to be an agglutinating force of the Hindu psyche in the state cutting across organisations and caste and making the book written by Ezhuthazchan a bestseller. Now, it is one of the two auspicious pilgrimage seasons second to the Mandalam of Sabarimala.
Parameswaran’s disillusionment after the political scenario of the post-Emergency phase where he was a MISA prisoner transformed him to a full-time social activist. Thus, he became the director of Deen Dayal Research Institute in New Delhi. However, his focus soon shifted to Kerala as he found the ideologies of Marxism along with the religions of Christianity and Islam were gaining momentum in the state while the nationalist stream was failing.
Thus, he came up with the idea of ‘Bharatiya Vichara Kendra’ as an intellectual forum that can take up such challenges effectively through in-depth studies, research and propagation of ‘Bharatiya’ ideas among the elite and the common masses in the year 1982. It has at present 30 functioning units in academically important centres of Kerala. With numerous debates and dialogues with political rivals, it emerged as a champion of the intellectual renaissance of ‘Bharatiya’ thoughts.
After graduating, Parameswaran started his activities in Kozhikode and played a pivotal role in starting Sangh literature, especially the weekly Kesari. His first published work was in Malayalam and was based on the commission report by an ICS officer KC Niyogi on the activities by missionaries from Kerala in Madhya Pradesh. It was named ‘Foreign Missionary Activities in India’. However, his initiative to provide freedom of devotion to the natives of Manathala near Guruvayoor in association with the festival of a temple owned by Sree Narayan Dharma Paripalana (SNDP) yogam was notable with the participation of members of Hindu society.
His role in organising Bharatiya Jana Sangh (BJS) in Kerala and the National Council meeting at Kozhikode in 1967 heralded the entry of the party into the state. Despite being reluctant in politics, he abided by the organisational obligation and served the BJS till 1977 and went on to become its national vice-president.
With the demise of Parameswaran, an adamant, ideological Hindu has bid adieu. It cannot be predicted when such a personality emerges in society.
(The author is a Prantheeya Karya Kari Sadasyan of the RSS.)
ShareTweetSendShareShare