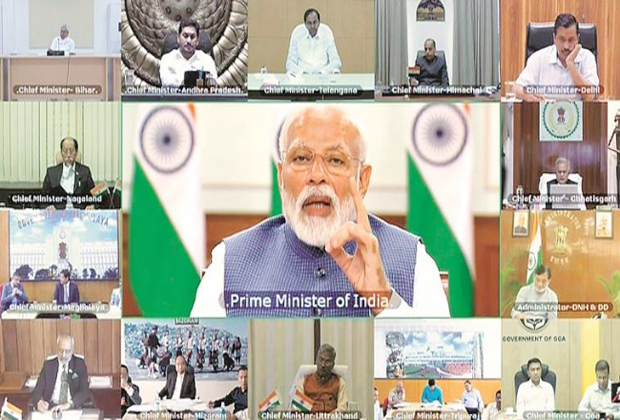 “Various state governments irrespective of their political differences have come together and stood with the centre. Close and systematic coordination with the central government have ensured that several issues are solved on time.“

Prime Minister, Narendra Modi in his latest edition of ‘Mann Ki Baat’ said ‘ We should pray that this Eid-ul-Fitr would mark the end of this pandemic in the world and normalcy shall be restored, he further added ‘Our Muslim brothers and sisters have been facing a lot of inconvenience for their Ramdaan due to this lockdown’. The message of the Prime Minister was loud and clear, India is an inclusive society, we shall always stand united in these times of crisis and will always ensure that our brothers and sisters, irrespective of their social and religious backgrounds are safe and protected at all times.

India is not only the world’s largest democracy but is also home to a wide diversity and it is this diversity which is our ‘national identity’. For a country like India which is home to multiple religions, a number of languages & traditions and is also the mother of spiritual science, the binding force that keeps us all together and stronger is the mutual respect, the respect which guides us in testing times.

In this whole fight against CoVid19, the way the government ensured that people from all sections of the society are together and lead this fight, reflects the Indian culture and civilisation, which is based on the principles of ‘inclusiveness’. Mahatma Gandhi once said “Our ability to reach unity in diversity will be the beauty and test of our civilisation”.

The success of the principles of democracy lies in the true practice of it. Prime Minister Narendra Modi’s approach and efforts to restore good health in these times of crisis have come out as an example for the world. The trust of the people, confidence in regional leaders, a systematic setup of the administration and a regular dialogue with the people has ensured that India comes out of this pandemic stronger than ever. The Prime Minister ensured that in this fight against the pandemic, meaningful suggestions from people of all sections should come in, his regular dialogue through ‘Mann ki Baat’ has perhaps given a sense of ‘involvement’ to all. He recognised that in this fight against the CoVid19, people-driven actions have been the greatest force which in turn makes India stronger than before, after all a democracy is also ‘By the people’.

One of the striking features of this whole battle against the CoVid19 has also been the leading capacity of the young ignited souls from all over the country. The whole awareness campaign and volunteer work led by the youth speaks of their contribution in these times of crisis. Many young people came together and started working in close alliances to reach out to the people in need in less time.

The whole approach towards restoring normalcy and good health has had the feeling of ‘oneness’ as the most important dimension. The biggest source for this feeling of oneness has been our ‘Dharma’, Dharma to serve all.

To a great extent, social media has also bridged this gap and provided a platform for the young people to have their own network and make the positive use of it. Simply tweeting a picture of a person in need in any part of the country and providing help by locating the right person on twitter has greatly ensured that the affected person gets help at the right time. The coming together of the whole community, multiple sectors and various sections of the society has greatly resulted in the flattening of the curve and most importantly in creating a feeling of togetherness.

Various state governments irrespective of their political differences have come together and stood with the centre, not only this, close and systematic coordination with the central government has ensured that issues like that of the migrant labourers are addressed without these poor people getting very much affected. The first train carrying nearly 1,000 migrant workers from Lingampally in Telangana to Hatia in Jharkhand was set off, though it was a one-off affair but this move has been largely welcomed by the people. Various state governments have decided to bring back the stranded migrant workers and students studying in other parts of the countries by putting in proactive measures, not only this, the state governments like that of Uttar Pradesh have also ensured that these migrant workers who have come back should be provided with proper health check-ups and adequate facilities.

A pandemic like situation always calls for a united fight against it. One India, stronger India has been the very basis of all the efforts put in by the Government of India. Swami Vivekananda once said, “All differences in this world are of degree, and not of kind, because oneness is the secret of everything.”

This whole approach and the process being put in restoring normalcy and good health has had the feeling of ‘oneness’ as the most important dimension to it. The biggest source for this feeling of oneness has been our ‘Dharma’, Dharma to serve all. The way 1.3 billion people of this great land responded to the call by given by the Prime Minister is the testimony to the fact that in this fight against CoVid19 the entire country is with the government and the millions of the doctors & health workers who are working to take India out of this pandemic as ‘One’. Eventually, when India comes out of this pandemic, it will be ‘One India, Stronger India’.

(The author is a research fellow at India Foundation)