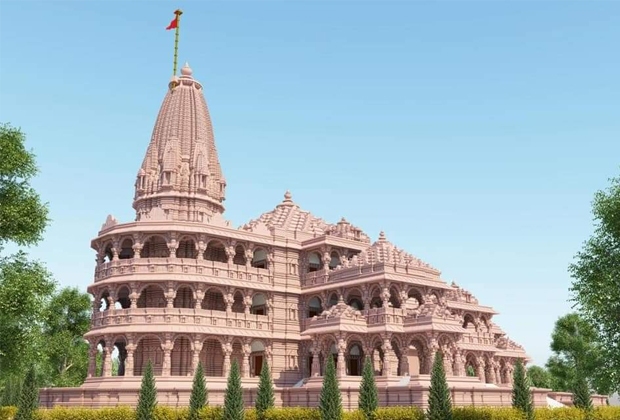 Ayodhya, the birthplace of Lord Rama, is raring to turn the pages of history and usher a new chapter in its saga with the construction of a grand Shri Ram Temple slated to commence on August 5. The chronicle of this festival will be inscribed in golden letters in the cultural history of Bharat. Not a mere block of concrete and stones, this temple is the symbol of faith and aspirations of billions of Bharatiya people spread across the world. A landmark event, this day transports one back to the year 1951 when the then President of independent Bharat, Rajendra Prasad, did prana pratishtha puja of the Somnath Temple. Illustrious leaders of the country like Sardar Patel, Mahatma Gandhi, Kanhaiya Lal Munshi, V P Menon, S Radhakrishnan and Rajendra Prasad had hailed the resurrection and restoration of the Somnath temple as a proud moment in the history of independent Bharat – an affirmation of our eternal legacy. However, then Prime Minister Jawaharlal Nehru deemed the act as “Hindu revivalism”. In his book Pilgrimage to Freedom, KM Munshi, a minister in Nehru’s cabinet, reproduced excerpts of a debate that ensued between the two of them at that time. Today, given the backdrop of Ayodhya, reinvoking parts of that debate is crucial to better understand the cultural significance of the restoration of Ram Mandir, and also, why there is opposition to it.

The history of Somnath Temple is comparable to that of the Ram Mandir of Ayodhya as the Muslim Turkic invader Mahmud of Ghazni attacked the Somnath temple and successive Muslim invaders repeatedly demolished it, eventually destroying it completely.

Temples that comprise the cultural heritage of a civilisation are not mere physical symbols, they are an embodiment of the moral values and traditions that bind and energise the whole society. Munshi writes: “In November 1947, Sardar …visited the temple. At a public meeting, Sardar announced: ‘On this auspicious day of the New Year, we have decided that Somnath should be reconstructed. You, people of Saurashtra, should do your best.’”

The country’s leadership of that time was split into two opposing ideological camps. Munshi writes: “At the end of the cabinet meeting, Jawaharlal called me and said: ‘I do not like your attempt to revive Somnath. This is Hindu revivalism.’”

Why did Nehru oppose this act as “Hindu revivalism,” while Munshi referred to it as “Bharatiya collective-conscious” and saw the revival as a celebration for the common man? These two interpretations are in reality the two different ideologies that have inhabited the Bharatiya mind. Nehru was not opposed to Bharat but the Bharat of his dreams was a spin-off of the European view of life, which was diametrically opposite to the Bharatiya view. It was “abharatiya”. Whereas the concept of Bharat of leaders like Sardar Patel, Rajendra Prasad and Munshi was steeped in Bharatiya civilisation.

Munshi goes on to write: “On April 24, 1951, I wrote a letter to him (Nehru) which I am reproducing next literally: ‘When the whole scheme was discussed by Sardar with Bapu, he stated that it was all right except that the funds necessary for reconstructing the temple should come from the public. Thereafter, the idea that the Government of India should finance the reconstruction of the temple was given up… Yesterday you referred to ‘Hindu revivalism’. I know your views on the subject; I have always done justice to them; I hope you will equally do justice to mine… It is my faith in our past which has given me the strength to work in the present and to look forward to our future. I cannot value freedom if it deprives us of the Bhagavad Gita or uproots our millions from the faith with which they look upon our temples and thereby destroys the texture of our lives.’”

And so the reconstruction went ahead. When the time came to install the deity, Munshi approached Prasad and asked him to perform the ceremony, but added a rider, “that he should accept it only if he was prepared not to fail us.” Munshi says “when it was announced that Dr Rajendra Prasad was to inaugurate the Temple, Jawaharlal vehemently protested”. Still, “Rajendra Prasad kept his promise. However, his speech delivered at Somnath was published in all the papers, but was cut out from the official organs.”

It is ironic that Nehru, the Indian icon of liberalism and freedom of expression, should make sure that the speech of the President is censored. In this manner, despite opposition, Somnath was rebuilt and today the magnificent shrine attracts millions of devotees. However, 60 years of rule of one regime and the patronage of governments has proliferated the proponents of the Nehruvian idea of Bharat in academia and the media. Hence, history is repeating itself and the opposition to the Ram Mandir in Ayodhya is more vocal than the opposition to the Somnath temple was. This does not dampen the spirits of innumerable Bharatwasis who believe in the integral and holistic spiritual tradition of Bharat.

Restoration of the national and cultural heritage of Bharat will begin with the Ram Mandir construction on August 5. The Doordarshan telecast of the inaugural will enable people of Bharatiya origin across the world to witness this historic moment. In observance of corona-related directives, this event will see fewer participants in attendance. It is my firm belief that the temple trustees also view this event as the re-establishment of eternal Bhartiya legacy and pride and not just the construction of a structure. This must be why senior representatives of various faiths and sects like Jain, Bauddh, Sikh, Muslim, Christian, Scheduled Castes and Scheduled Tribes, priests, Mathadhish and spiritual gurus of our country have been invited to grace this jubilant affair.
The Ram Mandir is not a mere temple, it is the symbol of our cultural heritage.