Moplah riots were a pogrom against Hindus 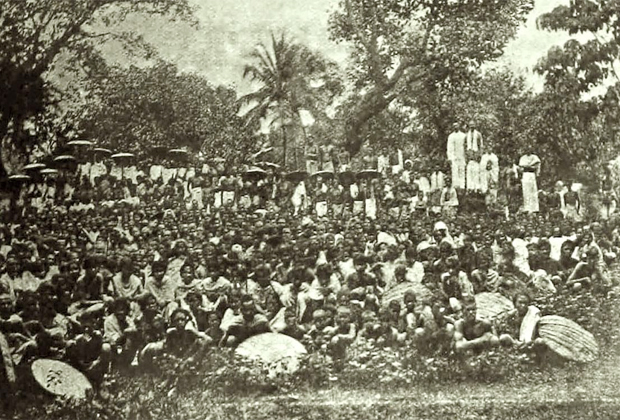 What we are witnessing today is the spectacle of Kerala being turned into a graveyard of historical facts. Distorted and dubious historical narratives—manufactured in a bid to build an even more toxic narrative —are being reinforced and celebrated with scant regard for historical facts and events. The most disturbing and insensitive aspect of the whole exercise is the role played by so-called historians in pushing the fabricated narratives on a people who were hapless victims of one of the worst communal pogroms recorded in the annals of Indian history.

Ever since India became an independent democracy, there has been a concerted effort to whitewash the notorious Malabar riots of 1921 and project it as either a peasant uprising against exploitative landlords or link it with the freedom struggle. Although these discussions mostly remained in the realm of academia, in the run up to the centenary year, there has been a renewed and motivated campaign to mainstream this distorted narrative through cinema and other mediums and graft it onto the collective conscience of the people. It seeks not only to blur the facts that still live in public memory but also bury them further down so that the ugly aspects of the riots never face historical scrutiny.

The recent controversy started after the announcement of a Malayalam film Variam Kunnan, a biopic on the mastermind of the 1921 genocide, Variamkunnath Kunjahammed Haji. What annoyed and concerned many was the fact that barring a few notable exceptions—the title role is being played by Prithviraj Sukumaran—most of the key jobs in the film, right from production to execution, are handled by individuals who harbour sympathies for radical Islamist outfits, including the Popular Front of India and the Islamic State. One of the scriptwriters had posted a message on social media as to how cinema can be an effective tool for furthering the cause of Islamisation of Kerala. Another key person of the project reportedly made a failed attempt to join the Islamic State in Syria to wage jihad against infidels. The Islamist-sponsored-and-scripted centenary blitzkrieg is being staged to mount psychological terror on Hindus—who are on the verge of becoming a minority in Kerala—and thereby establish Quwwat ul Islam (the might of Islam).

The protagonist of this Islamist project, Kunjahammed Haji, belonged to a rabidly iconoclastic family who, along with his father, was earlier deported to Mecca for engineering a slew of communal riots. He spearheaded the Hindu genocide of 1921, which led to the massacre of thousands of Hindus, forcible conversions, rape of Hindu women and children and destruction of Hindu properties and places of worship.

Reportedly, in the biopic, Kunjahammed is projected as a paragon of communal harmony and Hindus as villains who sided with the British. His “valiant efforts” led to the flight of the British from that part of the country and he established an independent Malayala Nadu (land of Malayalis) for a few months, though in reality what he established was Al-Daula (Islamic State) where he imposed jazia (religious tax) on the Hindus of his territory.

It is important to understand the persona of Kunjahammad Haji, who rose to notoriety at a young age as a constant cause of law and order problems in the area. The administration exiled him to Mecca after he was found to be involved in a series of communal attacks on Hindus and their places of worship. His main vocation was extortion and supplying women to the Arabs to be held as their concubines. After his sojourn in Mecca, he was allowed to return to Kerala on the condition that he would not visit his native place.

In a bid to attract Muslims to the Khilafat Movement, Congress leaders approached him, though he was reluctant to join the movement initially. According to K. Madhavan Nair, the freedom fighter, he was not keen to associate with the Congress, which, Kunjahammad Haji believed, had “Hindu credentials”. But Congress leaders managed to rope him in considering his sway over a section of Muslim youth. It is true that in the initial stages of the riots, he did not turn against the Hindus. However, as the Islamisation drive gained momentum, he showed his true communal colours and took recourse to killing or forcibly converting Hindus into Islam. This irrefutable truth has been recounted and recorded by many victims and witnesses of the riots.

A section of historians and Islamists allege that there isn’t any evidence to link Kunjahammad Haji with the anti-Hindu pogrom. This is far removed from reality. A report published by The Englishman on 6 October 1921 states: “Several recent reports show Variankunnath Kunhammad Haji and Chembakasseri Thangal have decided that all Hindus residing in villages at the mercy of rebel bands should be put to death unless they accept Islam. Instances are mentioned in which Hindus had actually been forced to dig their own graves before being butchered.” His cruelty knew no bounds. C. Gopalan Nair writes: “On the outbreak of the rebellion he became king, celebrated his accession by the murder of Khan Bahadur Chekkutti, a Moplah retired Police Inspector, who was decapitated while expiring in his wife’s arms.”

Moplahs led by Kunjahammad Haji committed unspeakable atrocities on innocent Hindus. The Special Judge hearing riot-related cases, in the judgement, notes: “The rebels seem to have meant to kill every male in the place whom they could catch hold of, and the only survivors were those who either got away or were left as dead. The abduction of a young girl and a boy shows the deliberate ferocity of the attack.” The abducted girl was later rescued from the hands of the rebels “after a detention of six weeks and after suffering indescribable indignities”.

It was the Marxist historians who first appropriated the communal pogrom as a peasant uprising to suit the ideological narratives and requirements and win over a large organised vote bank for the Left parties. Later, Islamists have bought into the Leftist critique of the riots, while Islamists fortify the anti-Hindu instincts on the Left. However, E.M.S. Namboodiripad, the Marxist ideologue and the main proponent of the “peasants uprising” theory, on one occasion blamed the religious fanatics “who believed killing or converting a kafir will take them to the steps leading to the threshold of heaven” for the riots, in his book, Kerala’s National Problem (Keralathinde Deesheeya Prashnam). Samuel Aaron, a freedom fighter and a Congress leader, in his autobiography had made it explicitly clear that to call the riot Mappila Rebellion or freedom struggle would amount to a repudiation of the historical truth. According to Moidu Moulavi, a freedom fighter, and Salafi leader, most of those who were at the forefront of the “agitation” were landlords who paid land tax. This belies the claim that what happened in 1921 was a peasant uprising.

In his investigation report on Moplah outrages prior to the 1921 riots, T.L. Strange, Special Commissioner in Malabar, categorically dismissed the allegation of oppression by Hindu landlords as the cause of communal problems. He writes: “It is apparent that in no instance can any outbreak or threat of outbreak that has risen be attributed to the oppression of tenants by landlords…I have given the subject every attention, and am convinced that though instances may and do arise of individual hardship to a tenant, the general character of the dealings of the Hindu landlords towards their tenantry, whether Moplah or Hindu, is mild, equitable and forbearing. I am further convinced that where stringent measures are taken, the conduct of the tenants is in the vast majority of cases, the cause thereof and that the Moplah tenantry, especially of the Taluks in South Malabar, where the outbreaks are so common, are very prone to evade their obligations and to resort to false and litigious pleas.”

He further states: “The Hindus in the parts where the outbreaks have been most frequent, stand in fear of the Moplahs as mostly not to dare to press for their rights against them, and there is many a Moplah tenant who does not pay his rent, and cannot, so imminent are the risks, be evicted. Other injuries can also be put up with, uncomplained of.”

This was what BR Ambedkar wrote on the Moplah riots: “There occurred in that year in Malabar what is known as the Moplah Rebellion. It was the result of the agitation carried out by two Muslim organizations, the Khuddam-i-Kaba (servants of the Mecca Shrine) and the Central Khilafat Committee. Agitators actually preached the doctrine that India under the British Government was Dar-ul-Harab and that the Muslims must fight against it and if they could not, they must carry out the alternative principle of Hijrat. The Moplahs were suddenly carried off their feet by this agitation. The outbreak was essentially a rebellion against the British Government. The aim was to establish the kingdom of Islam by overthrowing the British Government. Knives, swords and spears were secretly manufactured, bands of desperados collected for an attack on British authority. On 20th August, a severe encounter took place between the Moplahs and the British forces at Thirurangadi. Roads were blocked, telegraph lines cut, and the runway destroyed in a number of places. As soon as the administration had been paralysed, the Moplahs declared that Swaraj had been established. A certain Ali Musaliyar was proclaimed Raja, Khilafat flags were flown, and Ernad and Walluvanad were declared Khilafat Kingdoms. As a rebellion against British Government, it was quite understandable. But what baffled most was the treatment accorded by the Moplahs to the Hindus of Malabar. The Hindus were visited by a dire fate at the hands of the Moplahs. Massacres, forcible conversions, desecration of temples, foul outrages upon women such as ripping open pregnant women, pillage, arson and destruction—in short, all the accompaniments of brutal and unrestrained barbarism, were perpetrated freely by the Moplahs upon the Hindus until such time as troops could be hurried to the task of restoring order through a difficult and extensive tract of the country. This was not a Hindu-Muslim riot. This was just a Bartholomew. The number of Hindus, who were killed, wounded or converted, is not known. But the number must have been enormous.”

In his book Text and Context, incumbent Kerala Governor Arif Mohammed Khan writes: “The movement failed miserably as the Turks themselves abolished the Khilafat but it succeeded in introducing ‘religiosity’ as credible instrument of political mobilisation. What role this religiosity has played in shaping future politics, particularly the events of 1947 surely needs reappraisal.” All these facts conclusively prove that what was enacted in Malabar in 1921 was nothing but a well-orchestrated pogrom against Hindus. And a day will come when this incontrovertible fact will be accepted by all.

(Nandakumar is an RSS ideologue and All India Convenor of Prajna Pravah.)