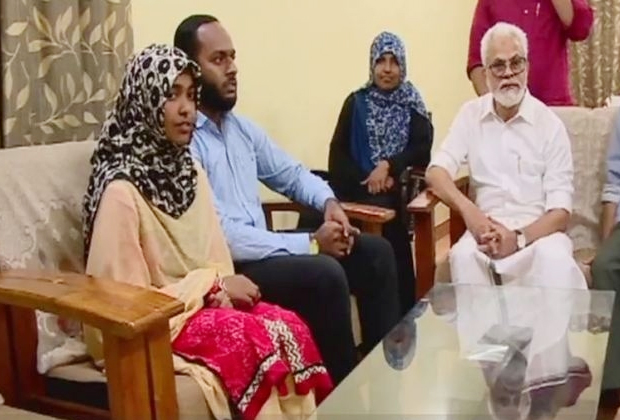 It is so soon to forget Akhila, who was an incessant topic of debate for national as well as for international media since her proselytisation. This had irked Hindu as well as Islam widely, caused fury, sentiments poured in, still, she stood like a rock against all the tears, love, curse and hatred from kith and kin. She fought with the help of fundamentalists and fought till Supreme Court, earned ‘freedom’ from Hindutwa and her parents!

She had started showing invariable symptoms of indoctrination as early as in 2015 while doing DHM (Doctor of Homoeopathic Medicine) in Salem, in Tamil Nadu. She often asked her parents did ‘Vaikathappan’ (Lord Shivji) save us despite all our prayers. Like many love Jihad victims, Akhila too was indoctrinated with Tawhid/ Monotheism deliberately exalted over Polytheism by her Muslim classmates. Her believes, rituals and Gods were often ridiculed, questioned with perfect logic causing a sense of inferiority, and being the daughter of a communist, she had no appropriate reasoning to give as a basic spiritual and religious supplement was not provided to her and she turned to be an easy prey.

She was very close to the sisters Jaseena and Faseena among friends, who hailed from Perinthalmanna in Malappuram district in Kerala. Their unwavering rituals and routine prayer with devotion started influencing her tremendously. Questions about Islam and related things poured in, followed which Akhila became a frequent visitor at their home. Aboobacker, father of Jaseena and Faseena recognized her zeal for Islam and arranged all facilities for her to learn more about Islam at Perinthalmanna. Till here story went well and even her parents did not smell a rat at all.

Eventually, she landed at notorious Sathyasarani in Perinthalmanna with the help of Abubacker to undergo Islamic studies, amid court and cases she married Sheffin Jahan in hurry by the end of 2016. Ashokan, her father was handicapped by the law. Being a major, Akhila possessed all the rights to choose her belief as well as to practice it. Jihad won and Ashokan lost the battle.

Jihad is the byproduct of Communism. Atheism/Rationalism and extreme secularistic thought processes lead to anarchy in the families to a certain extend. Surprisingly Hindu families fall into it comparing to other religions as both Islam and Christianity have strong socio-religious cultural and spiritual set up beyond political perceptions, to equip their children with religious texts and practices like Madrassas and Sunday classes in Church. Hindu, anywhere in India or abroad lacks such spiritual set up.

It will not be so difficult to find ten communists who are Hindu and deny God and temples, but rare to find a Muslim or Christian Communist who would deny their belief irrespective of their political ideology. When Hindu is more exposed to such social threats, a Hindu Communist is even more unarmed to fight any induced, organised and strategic wars of Jihad.

Love Jihad is the process of indoctrinating Islam ideology to the most vulnerable in order to propagate the religion on the pretext of love. This can or cannot be in lieu of money. Though substantial evidences are lacking, it is widely discussed that strong financial aid is being provided to support Love Jihad. Source of fund could definitely be anti-national activities like recent NIA probing gold smuggling case in Kerala. However, the cases are increasing, which means efforts are stronger on the other side.

Islam is definitely not a religion to be embraced for long especially for a Hindu, for whom religion is the synonym for freedom, and on the contrary, Islam restrains and reduces a human being to a sheer object. Same is the case with Communism. People fear to go back when it tastes bitter. This evolution of return or realization takes as long as it took to get fancied, influenced and inveigled in the beginning.

Proselytisation from Hindu to Islam often has two predictable end cards. Either a suicide/ suicide like murder or a U-turn home. This story is also in the verge of taking a U-turn as per the media brief done by Ashokan yesterday. Akhila is staying separate from her husband Sheffin Jahan for last four months and she seems to be afraid of something as per her father.

Yes, those who embrace Islam is always in fear, even Madhavikkutti had said that she wants to come back to her home religion, but she was scared. So as Akhila!