by Sabareesh P A
in Articles 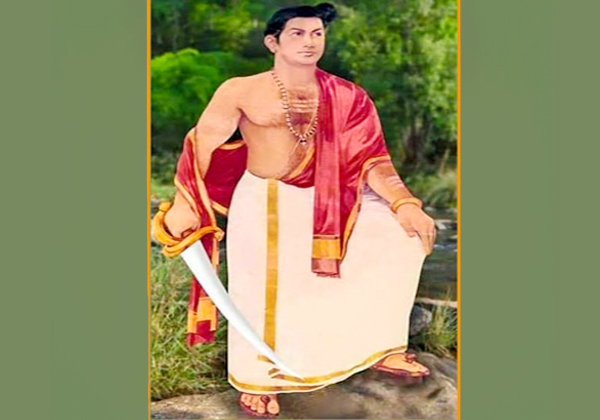 Bharat is home to the lineage of countless warriors who defended the country against Arab, Portuguese, British, Dutch, French and other colonial forces both on land and sea over the last 1000 years. When the British East India Company traders played the strategy to rule India it swiftly took the shape of British political hegemonism with a militaristic fervour. Much before the First War of Indian Independence in 1857 the forces of the British East India Company confusingly paused at a fierce warrior king in Kerala whose name reverberated as Kerala Varma Pazhassi Raja – केरलवर्मापलशीराजा. Also known as ‘Kerala Simham’ or the lion of Kerala, Pazhassi Raja presented crushing defeats to the British forces and equally resisted the invading forces of Hyder Ali and Tipu Sultan of Mysore.

Kerala Varma (birth name) was born in 1753 at Pazhassi / पलशीin Kannur into the royal family of Kottayam.This resilient prince was put to test when he was made one of the de facto heads of state at the age of 21 by superseding many older contenders. This was the critical time when forces of Hyder Ali had seized the kingdom of Malabar in 1773 which led the then King of Kottayam to seek political asylum with the kingdom of Travancore. Pazhassi Raja resisted the troops of Hyder Ali in 1774 and ultimately led his kingdom to victory against the forces of Hyder Ali in 1793 through a deliberate and intended alliance with the British. But the British had different ideas, including securing a monopoly over the pepper trade point near the Thalassery port which was liberated from Hyder Ali! The British started levying the tax and struck a deal with Kerala Varma’s uncle Vira Varma and appointed him as the King of Kottayam. What followed was the British’s cunning and treacherous double game of tax centred exploitation of the peasantry and yet maintaining the sovereignty of Vira Varma as the local ruler. This interference by the British in the local governance and affairs of the economy which exploited the common people was the reason that made Kerala Varma the legend he is known for: Kerala Simham.

Kerala Varma Pazhassi Raja’s resistance against the British was unique in the sense that he refused to abandon his subjects and was immensely successful in mobilizing people of all castes, classes and faiths. He earned immense respect from the people for his firm decisions, resilience and successful war tactics. However, this popular support angered the British and the Pazhassi’s palace was attacked and royal treasuries plundered in 1796. Kerala Varma Pazhassi Raja and his men escaped into the forests of Wayanad. He started to build an army to wage guerilla warfare and established strategic camps which was positioned across the thick forests of Wayanad. The British with no knowledge of the deep forests could not even reach Pazhassi Raja. In 1797 Pazhassi Raja’s forces defeated an army of over a thousand troops led by Major Cameron where only a few of the British soldiers returned alive. Such conflicts continued the next four years until the British came up with their peace treaty with Pazhassi Raja.

However, with the death of Tipu Sultan in 1799 and British annexation of Mysore, the tensions between Pazhassi Raja and the British resurfaced when the British attempted to annexe Wayanad into Mysore. However this time Pazhassi Raja presented the British with a blowing defeat that deemed eligible for global recognition till date. Pazhassi Raja waged the 13 year long Cotiotewar (1793 – 1806) or the war of Kottayam against the British. The guerilla warfare tactics of Kerala Varma Pazhassi Raja thwarted and defeated the British forces led by the globally acclaimed Maj. General Arthur Wellesley – the Duke of Wellington, who had lateron led the British forces to victory at the second Anglo-Maratha War (1803), at the Battle of Waterloo (1815)against Napoleon Bonaparte and later became the British Prime Minister twice. Therefore Cotiote war waged by Pazhassi Raja is the only war in which the globally acclaimed Major General Arthur Wellesley failed and that too against a fiery local king. The Cotiote war of 13 years also happens to be the longest war fought by the English East India Company during their conquests in India and was much longer than the Anglo-Mysore wars, Anglo-Maratha wars, Anglo-Sikh wars and Polygar wars!

Pazhassi Raja’svalour, daring courage, indomitable spirit and the unrelenting love for his people is unforgettable for the generations who have known his life. Indeed, the revolt and resistance of Pazhassi Raja was a people’s revolt as he united people from all walks of life. The ‘Pazhassi Raja Tomb Museum’in Manathavady, Wayanad still hosts the king’s memorabilia and weaponry used by the king and his troops. Pazhassi Raja’s 32 years of resistance against the British tyranny is artistically documented in the well-acclaimed 2009 Malayalam movie ‘Pazhassi Raja’. The martyrdom of Kerala Varma Pazhassi Raja is but the eternal saga of struggle and brave resistance for Indian Independence.

(The writer is currently a Research Scholar at the Centre for Studies in Science Policy (CSSP), Jawaharlal Nehru University, New Delhi.)